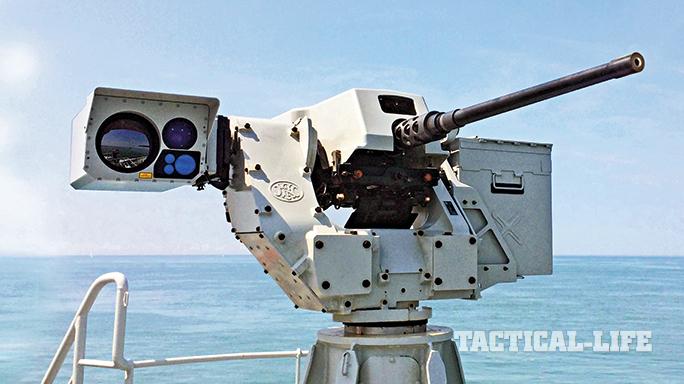 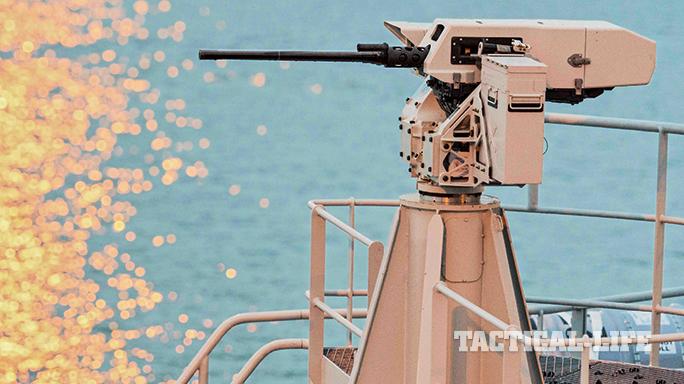 2 of 4
Weapons Insider: FN’s Sea deFNder Machine Gun
The system includes an ammo box mounted on the right side. 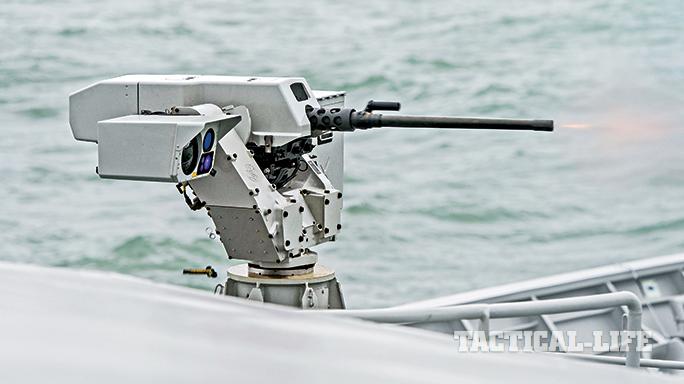 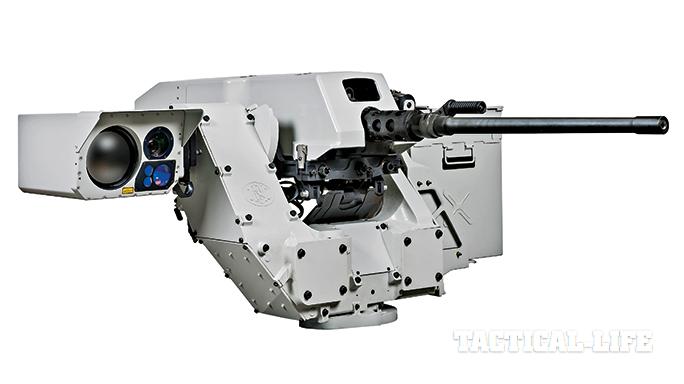 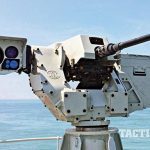 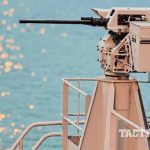 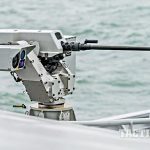 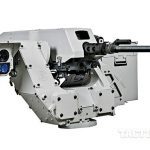 Shipboard defense has always been problematic. In ancient times, triremes and other rowed warships carried decks full of archers and infantrymen to protect their own vessels and board enemy craft after ramming them. In the age of sail, cannons were primarily offensive weapons, but marines and sailors stationed on fighting tops and rigging on the masts fired on enemy deck crews when ships bore close aboard and blasted each other point blank with broadsides. Crews also formed boarding parties to attack adversaries and take their ships.

Layered defenses continued when ships converted from sail to steam and from wooden hulls to iron and steel. Just after the turn of the 20th century, the start of the dreadnaught era, capital warships were designed around large guns intended to disable or destroy opponents of comparable size and capability in long-range duels. These new battleships and cruisers relied on smaller, faster and specialized war craft, destroyers and frigates designed for anti-submarine warfare and aerial defense, for protection from new maritime technologies—submarines and rudimentary aircraft—that posed unprecedented threats to even the largest ships of the day. By World War II, both submarines and airplanes had advanced so radically that deck-mounted defenses returned to large ships, including the new kings of the fleet: aircraft carriers. Well-preserved WWII-era warships seem almost top-heavy, with defensive batteries ranging from 5-inch, .38-caliber twin turrets to .50-caliber machine guns. Modern naval vessels are much sleeker, but they carry far more effective weapons, including anti-air missiles and, for truly nearby threats, the Phalanx CIWS (close-in weapon system), a radar-guided, six-barreled, 20mm Gatling gun with an eye-watering 4,500-round-per-minute (rpm) rate of fire. The purpose of these weapons, regardless of their vintage, is to lay down an impenetrable curtain of lead to intercept any platform or projectile hurtling toward a ship with malicious intent.

Today’s maritime defensive weapons are exceptionally capable and lethal, but they’re not appropriate for every combatant in international fleets. Littoral combat ships, such as corvettes and patrol boats, that make up the majority of navies around the world are too small to carry many sophisticated weapons and even smaller systems such as the CIWS that can weigh up to 13,600 pounds—a real burden for hulls with narrow beams and limited displacement.

Belgium’s Fabrique Nationale d’Herstal, now FN Herstal, S.A., one of the world’s premier military and commercial armaments producers since its founding in 1889, has addressed this issue by creating a family of “deFNder” Remote Weapon Stations (RWSs) that fills the bill for lightweight vehicles, armored vehicles and small ships. The systems also can be mounted statically for position defenses. Every deFNder provides remote capability around the clock that enables the operator to remain protected while firing. The Sea deFNder is a variant of the deFNder Medium system that weighs less than 450 pounds and is adapted for naval use. The system can utilize any FN machine gun ranging from 5.56mm NATO up to .50-caliber or 40mm automatic grenade launcher rounds. This includes the FN M3R .50-caliber gun with a firing rate of 1,100 rpm. FN unveiled the Sea deFNder at the EURONAVAL exhibition in Paris in late October 2014, making the model a brand-new entrant in the maritime weapon market.

The Sea deFNder features a semiconductor charge-conducted device (CCD) gun sight module with infrared (IR) cooled or uncooled capability for aimed firing at night. The system contains an ammunition box to feed plenty of rounds into the weapon, and the operator can fire the deFNder with one hand or a control handle similar to those used on computer games. Specific naval modifications include sealed surfaces to withstand saltwater and sea-spray corrosion, seals to keep water out of the operating systems, maritime environmental qualification standards and a two-axis gyroscopic stabilization optimized for ship movements.

According to FN, the company already has received an initial order for the Sea deFNder, bringing the total number of deFNder systems to more than 1,300 for land- and sea-based operations.

Thomas Loper, vice president of Federal Operations at FN America, recently commented on the new RWS. When asked why the Sea deFNder stands out, he replied, “The deFNder RWS provides optimized remote firing capability day and night while keeping the operator completely under armor protection, and it’s easily integrated onto a variety of mobile or static platforms. Specifically, it increases crew protection, situational awareness, firepower and firing accuracy for naval
applications.

“The Sea deFNder’s service packages include everything needed for rapid deployment, including associated weapon(s), ammunition, technical documentation, technical support, operator’s and maintenance training, and installation of the RWS onto the vessel,” Loper added. “The system’s open architecture facilitated installation for the .50-caliber FN M3R machine gun that fires at 1,100 rpm.”

FN began development of the Sea deFNder in 2010 after the deFNder Medium system was qualified for use on vehicle and aircraft platforms. The evolution of littoral threats, especially piracy in the Indian Ocean off East Africa and along the Pacific Rim, fueled the project, since a variety of ships, both naval and commercial, increasingly demanded defensive weapons that protected gunners from adversary fire, often intense on pirate vessels.

Loper noted that the maritime system’s developmental schedule needed to incorporate open operating architecture and extended modularity to handle a variety of weapons, more flexibility for wider angles of operation, adaptation for the M3R machine gun and an integration of gyroscopic stabilization that compensates for hull motion with image stabilization and target tracking for exceptional accuracy. In addition, adapting the entire system to the maritime environment and the impact of sea water and salt spray required toughening up nearly everything on the Sea deFNder to ensure it could stand up to the rigors of sea operations.

“We’re especially proud of the target tracking system on the Sea deFNder that makes firing from a moving vessel consistently accurate,” Loper said.

“In addition to the Remote Weapon Station, FN provides everything the customer needs for installation and to configure it with the appropriate weapon type. Technical documentation and support makes maintenance and repair, if required, quick and efficient. Preventive maintenance is reduced to cleaning, greasing, visual checks and camera desiccants replacement. There are very limited specific tools required to maintain the system.”

Given early sales, Loper is confident about the Sea deFNder’s market prospects. “There are numerous prospects in Europe, Asia, the Middle East, Africa, and in North and South America,” he said. Although he did not disclose the first customer by name, he added, “The order for the manufacture and supply of the first Sea deFNder units is from a NATO member navy.” The system is available now for world maritime services, both navies and coast guards.

The Herstal Group, with its subsidiaries FN Herstal and Browning, along with its U.S. operation, FN America, is completing its 125th year of operation. Its headquarters are in Herstal, a suburb of Liege, Belgium, with offices and facilities in the U.S. and around the world. It designs and manufactures many of the world’s best known and most popular military and sporting firearms as well as automatic weapons for multiple platforms and purposes, fire control systems and ammunition. 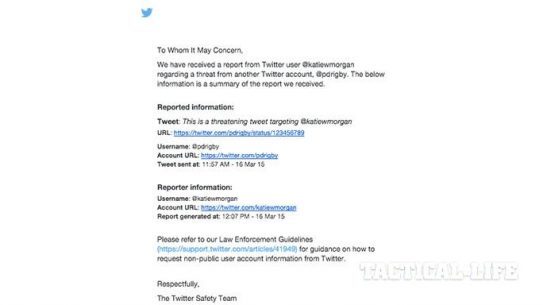