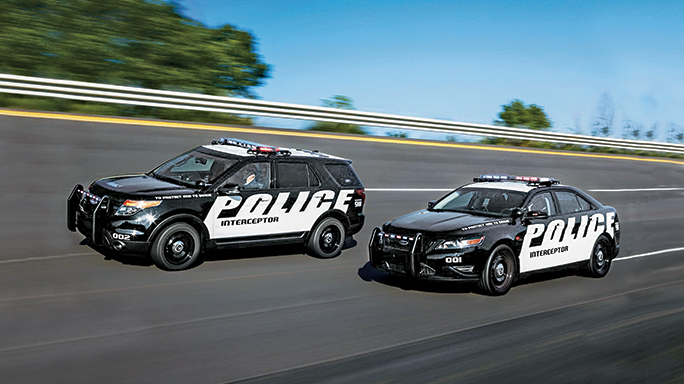 1 of 3
Hot Pursuit: Ford Interceptors Built For Police
“… both the Utility and Sedan versions of the Police Interceptor are the only pursuit-rated vehicles with standard all-wheel drive.” 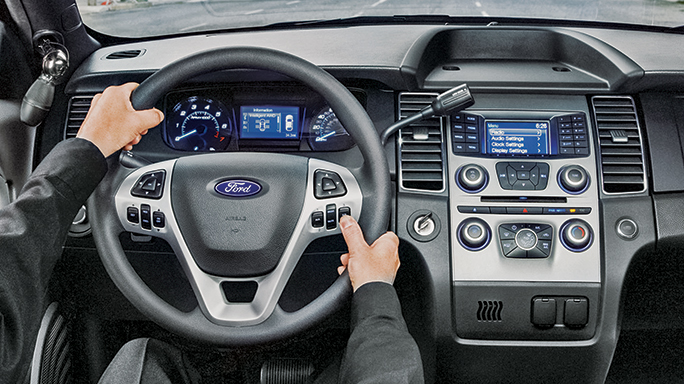 2 of 3
Hot Pursuit: Ford Interceptors Built For Police
The steering wheel switches and voice-operated controls can help LEOs turn on their lights, for example, without taking their eyes off the road. 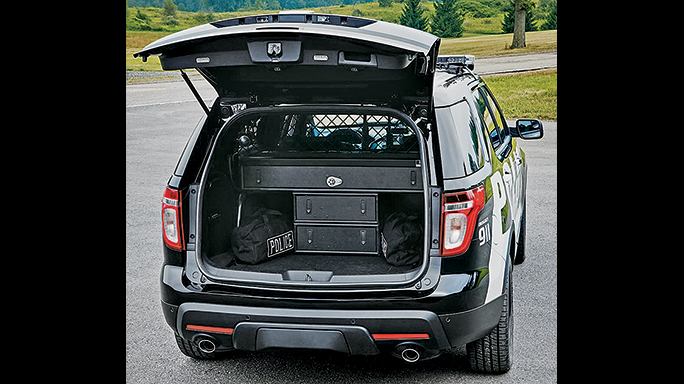 3 of 3
Hot Pursuit: Ford Interceptors Built For Police
Both the driver and passenger in the front seat can open the trunk of the Ford Interceptor Utility to access lifesaving gear. 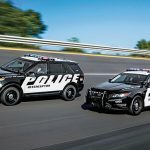 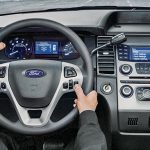 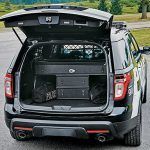 From the outset, Ford has been a dominant force in the police car market. Starting in 1932, Ford redefined police cruisers with its introduction of the first police V8 engine, quickly taking over the market. In 1950, the first Ford police package car was introduced, and since then, Ford police cars have become standard fixtures in almost every law enforcement agency’s fleet.

As mentioned, to create these next-evolution Police Interceptor vehicles, Ford listened to its experts on the Ford Police Advisory Board, which was “created by Ford to refine and develop future products that meet the needs of law enforcement agencies.” Created in 2000, this board is made up of a rotating panel of 25 experts from the law enforcement community. The current board is made up of cops from Canada and the United States, from Alaska to Florida and parts in between.

The vehicles have been designed to stand up to the demands of police work, with heavy-duty powertrain mounts, reinforced sub-frame mounts, and unique hubs and bearings. Larger-diameter springs are used in the suspension systems. Their tires were even designed to meet durability and pursuit standards, with some departments logging as many as 50,000 miles per year.

Ford’s Police Interceptor vehicles have unibody structures with boron steel in the “A” pillars and hydroformed, high-strength steel tubes that run the width of the vehicles to improve structural rigidity.

After the assassinations of NYPD Detectives Wenjian Liu and Rafael Ramos in 2014, Ford focused on officer safety and added Surveillance Mode technology to its 2016 Police Interceptors. This system warns officers when someone approaches the rear of the vehicle — a potentially lifesaving feature. This is a long overdue first in the industry. When someone is detected approaching from the rear of the vehicle, the driver’s side window will automatically rise and all of the doors will lock, giving the officer some time to react to a potential threat.

All of the doors also come with factory-installed National Institute of Justice (NIJ) Level III ballistic panels for officers to use as cover for protection from gunfire. If the rounds are coming downrange, the vehicles also have dual lift gate release switches accessible to both occupants in the front seat. Designed from officer feedback, this feature gives each officer a 45-second delay once the switch is activated to access the rear cargo area of the vehicle, where lifesaving gear can be stored.

The Police Interceptor were overhauled from top to bottom, with both Sedan and Utility versions receiving new instrument panels with enhanced systems to distribute electrical loads more efficiently. The Police Interceptors also include camera technology, with a standard rear camera with a 4-inch screen in the center of the dashboard or, as an option, shown inset within the rearview mirror.

Like many new vehicles out on the market, the Ford Police Interceptors come wired with SYNC hands-free information technology that allows officers to operate various communication and audio equipment by voice command—a great tool when in hot pursuit or under fire.

The newest Ford Interceptors can also “read” the traffic with the Blind Spot Information System (BLIS), a built-in radar that detects vehicles in the surrounding lanes, and if a vehicle enters the driver’s blind-spot zones, the system alerts the driver with a warning light in the side-view mirror. The radar also provides a cross-traffic alert system, which senses oncoming traffic when slowly backing out and warns when cross traffic appears within three car widths. This is coupled with a Reverse Sensing System, which makes an alert sound when the vehicle comes within 6 feet of an object.

If the bad guys run, these cars can rein them in with standard 3.7-liter V6 engines producing 304 horsepower and 279 foot-pounds of torque, or optional 3.5-liter EcoBoost V6 engines putting out 365 horsepower and 350 foot-pounds of torque. Those engines are set to power the vehicles’ standard all-wheel drive for some low-speed traction and high-speed handling and stability.

According to Ford, “both engines have been calibrated to meet extreme test requirements defined by the Michigan State Police and Los Angeles County Sheriff’s Department. Tests include aggressive driving on road courses and racetracks, braking and acceleration, top speed and city pursuit testing.”

Both Interceptor models have a standard six-speed transmission with a unique Pursuit Mode specifically (Please turn to page )programmed for law enforcement use. The transmission will automatically switch from normal fuel-saving operation to Pursuit Mode when it detects aggressive driving situations, giving the officer the full power of the Interceptor’s engine.

While hitting these high speeds, the Interceptors feature a unique cooling system designed for extreme use with custom-
designed brakes that can withstand the hard driving inherent in law enforcement operations on the mean streets.

The Police Interceptor Utility and the Police Interceptor Sedan are built at Ford’s Chicago assembly plant. Once the initial work is done, the vehicles are transported less than a mile away to Troy Design and Manufacturing to be outfitted with all of the law enforcement equipment. This includes multiple light patterns, as there are up to 25 different patterns available for the 2016 Police Interceptor Utility alone. The lights are now better integrated into the new front and rear fascia, allowing for a more seamless design and a stealthier look for patrol duty, and in a nod to police vehicle nostalgia, Ford added a blinking white function called “wig-wag” to the incandescent high-beam light bulbs.

Troy Design and Manufacturing is a wholly owned subsidiary of Ford and works out of a 54,000-square-foot facility. It offers over 125 different police packages that agencies can chose from to personalize their Interceptors. Approximately 200 American workers perform that work and help put together these innovative, ready-for-anything Ford Interceptors.

It's Wild Wednesday for Springfield's Duel 3 promotion and the company is giving away...