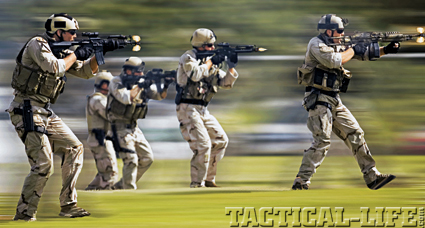 Our nation’s SEALs on the firing line.

“To Protect and Serve” is the ubiquitous motto on vehicles of our uniformed civilian defenders. For generations, this thin line of blue has fought the criminal predators among us, and is now our front line in the Global War on Terror. Those in military service also are commissioned to Protect and Serve—only the venue and operation tempo are different. The dedication, sacrifice, training, tools—and missions—have grown increasingly similar among those who draw a local paycheck and those who are paid by the Department of Defense.

In this issue, we closely examine new tools available to our uniformed services, as well as those appropriate for individual and home defense. When it comes to soldiers abroad, Czech allies and arms makers have designed the new, innovative CZ BREN 805 (on the cover), a leading-edge modular rifle that can change calibers and work together with the CZ 805 G1 40mm launcher to lay down some impressive downrange firepower.

When it comes to close combat, scatterguns are king. Operators in today’s rapid-fire engagements need reliability and capacity. We put 2,500 rounds through Mossberg’s 930 PSX autoloader—a shotgun common to military and police—as well as test the state-of-the-art semi-auto SRM 1216, which holds 16 shells at the ready.

But there are more options for close-quarter confrontations. What if you need to deploy the weapon from a vehicle, or keep it hidden while on VIP-protection detail? This is where pistol-caliber SMGs shine, and we had our experienced operator Leroy Thompson wring out Century Arms’ new 9mm UC-9 carbine, which is based on the battle-prove Uzi but has a street-legal barrel and semi-auto action.

It’s easier to think outside the box, however, if you don’t have a box. America’s free enterprise system thrives on innovation, but sometimes smaller, independent companies make strides unseen. This brings us to Kel-Tec’s new RFB (Rifle, Forward-ejecting Bullpup), a compact 7.62x51mm slugger that delivers serious power in a small envelope—engineering away problems previously associated with ambidextrous and bullpup designs and taking a new path altogether.

Staying ahead of the curve—much like our protectors—we bring you a thorough roundup of new piston-driven ARs that are ahead of the pack, running cooler and cleaner than traditional ARs, as well as a new offering from Head Down Products that is decked out in all the right accessories to be the Cadillac of battle rifles.
Tactical Weapons has all the bases covered. When the leader in polymer pistols gets even better, it’s news. We took Glock’s new G19 Gen4 autopistol to train with Pat Rogers of EAG Tactical to give you the latest tactics to keep our gunfighting skills and awareness razor-sharp. Indeed, the best weapon is only worth its weight in the hands of competent operators. We celebrate 50 years of Navy SEAL spec-ops success and take you on patrol with Anchorage PD S.W.A.T. to reveal how these last-frontier lawmen cover 2,000 square miles with a cool head and very cold steel.

Protection is the name of the game, so we researched the new, lifesaving IED-proof Valanx troop carrier that can handle the harsh terrain of Afghanistan, as well as two thermal imagers that can help detect bombs and other threats overseas or with our law enforcement stateside. A trip to the Modern Day Marine Expo shows the future of keeping our protectors safe. And since threats have no rules or boundaries, we go inside the USCG’s fight against dope-smuggling submarines.

Finally, since Tactical Weapons is about our heroes, we discuss Medal of Honor and Valor recipients. They kept us safe and demonstrated immeasurable courage behind enemy lines. This is a daily routine for most of our brave soldiers and law enforcement officers when they put on their uniforms. 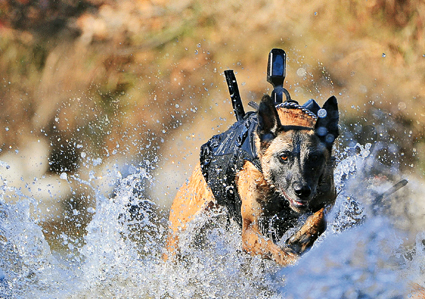 Our nation’s SEALs on the firing line. “To Protect and Serve” is the ubiquitous…