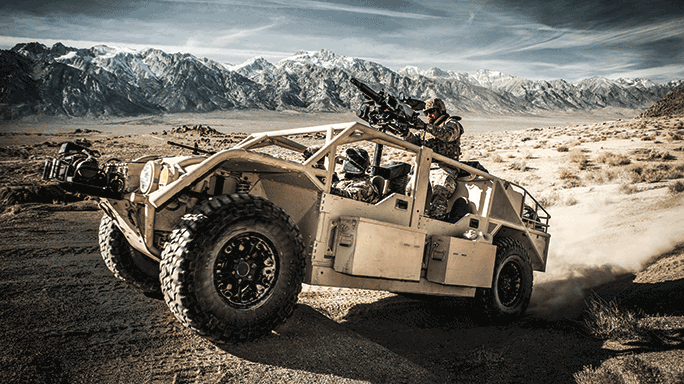 1 of 3
Flyer: General Dynamics’ Off-Road Warrior
The General Dynamics Flyer was built to safely transport soldiers across any terrain with the right gear for the mission at hand. Each Flyer can be outfitted with weapons and armor, for example, as needed. 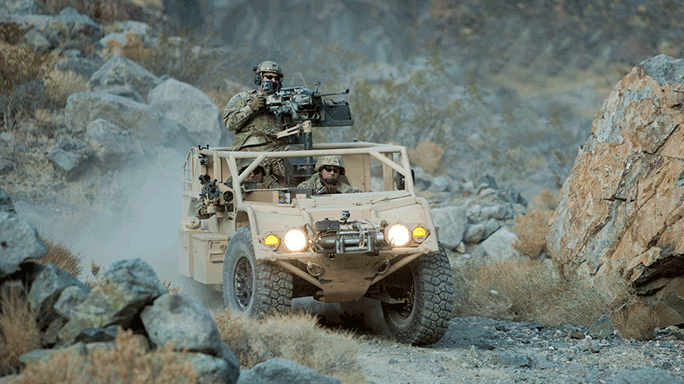 2 of 3
Flyer: General Dynamics’ Off-Road Warrior
“Size and weight are critical, but so are capabilities, and the Flyer’s design incorporates advanced systems that provide spec-ops units a pronounced edge for missions.” 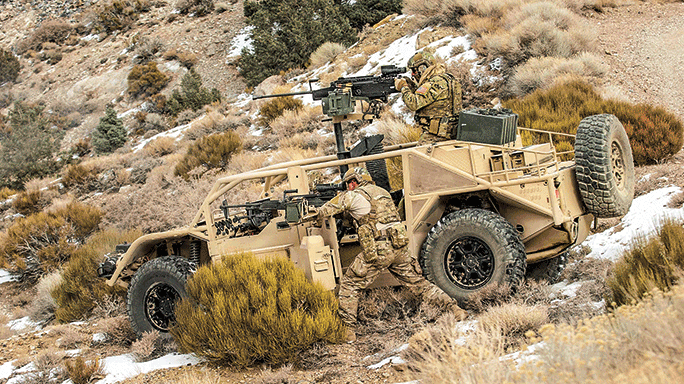 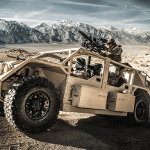 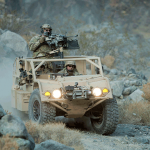 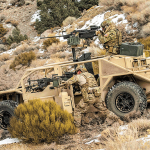 For more than 30 years, the HMMWV (High-Mobility Multipurpose Wheeled Vehicle, or simply “Humvee”) has been the predominant light utility vehicle in the U.S. armed forces and many allied services. The Humvee, designed and built by AM General, is the third generation of American light military vehicles, following the Jeep that served from World War II to 1960 and the M151 MUTT, which operated from the 1960s until the mid-1980s. The military has purchased more than 280,000 Humvees for an astonishing range of purposes, and more than 1,000 have been adapted for special operations missions. In recent years, the vehicles have been criticized for their vulnerability against improvised explosive devices (IEDs), but Humvees were not designed for combat operations.

This is important, since adapting Humvees, designated Ground Mobility Vehicles 1.0 (GMV 1.0), for special operations missions requires adding defensive weaponry as well as armor to protect crews and passengers. These additions can increase the GMV’s dimensions and weight, critical concerns for moving the vehicles by air into operational staging areas, often behind enemy lines, especially because the prime mover for special operations missions is the MH-47 Chinook tandem-rotor helicopter. The Chinook is an ideal platform for spec-ops aerial transport. It is big, capable of carrying dozens of troops if necessary, fast and able to fly nap-of-the earth to avoid radar detection. Chinooks have performed hundreds of successful spec-ops insertion missions, some involving internally loaded GMVs. The MH-47 also can carry two GMVs in an external slingload, but this limits speed and maneuverability, both critical factors for insertion missions.

Chinooks entered service more than 50 years ago, when MUTTs were standard military vehicles. Just 64 inches wide, they easily fit on the rotorcraft’s 90-inch-wide ramp and inside the cargo cabin. The GMV 1.0, however, is more than 7 feet wide, leaving just inches to spare for an internal load. Needless to say, GMV loading and unloading in a Chinook is not a speedy process, and time on the ground is also vital for insertion mission success.

In addition to GMV 1.0s, special operations units have for years used smaller off-road platforms such as the Chenowth Advanced Light Strike Vehicle (formerly the Desert Patrol Vehicle), but these are little more than militarized dune buggies and have limited mission capabilities because of their small size and light weight. Over the years, U.S. Special Operations Command (USSOCOM) has recognized the need for a vehicle designed from the ground up to meet mission requirements and fit more easily into the Chinook and similar aerial cargo bays.

In 2012, USSOCOM launched the GMV 1.1 program for a new design that met operational and transport needs and included new computing and communication capabilities. The GMV 1.1 program is lucrative, worth more than half a billion dollars, and it will produce up to 1,500 vehicles by 2020 if all options are exercised. The program attracted six competitors: the Northrop Grumman Medium Assault Vehicle-Light (MAV-L); an updated version of AM General’s GMV; the Storm Search and Rescue Tactical Vehicle (SRTV) from HDT Global; Oshkosh Corporation’s Special Purpose All-Terrain Vehicle (S-ATV); the Navistar Special Operations Tactical Vehicle (SOTV); and the General Dynamics Flyer 72 Advanced Light Strike Vehicle (ALSV).

In August 2013, USSOCOM selected General Dynamics’s Flyer 72. Despite several protests from other competitors, General Dynamics won the contract and delivered the first vehicles for operational testing of the Flyer’s safety, durability and reliability. According to Sean Ridley, the Flyer 72’s program manager, the tests have been successful and are nearly complete. The design passed an important production milestone in July 2015, and it is moving into Low Rate Initial Production (LRIP). Peak production will top out at about 200 vehicles per year.

The Flyer’s strongest selling point is its size. “The Flyer’s strength is in its lightweight design and modularity.  It is purpose-built for multi-mission configurations with high mobility capable of traversing very rugged and remote terrain,” Ridley explained. Its designation, 72, denotes the vehicle’s width in inches, making it easy to move quickly into and out of the Chinook’s cabin. The Flyer also can be carried internally in the CH-53 Super Stallion helicopter, operated by the Navy and Marine Corps, and the C-130 Hercules and C-5 Galaxy fixed-wing transport aircraft. With a base curb weight of just 4,500 pounds, it can even be sling loaded under the UH-60L Black Hawk utility helicopter.

Size and weight are critical, but so are capabilities, and the Flyer’s design incorporates advanced systems that provide spec-ops units a pronounced edge for missions. “Our Flyer design is truly a family concept,” General Dynamics’ Sean Ridley said. “The base vehicle is modular and can incorporate several mission kits, including armor, remote weapon stations and even specialized equipment for such tasks as lane clearing.”

The GMV 1.1’s top speed is 100 mph—30 mph faster than an unloaded Humvee—and it handles off-road travel in a wide variety of weather conditions. Both the Humvee and the Flyer use diesel engines, but the Flyer’s range far exceeds the Humvee’s, with a fuel burn rate—24 mpg—at least twice as efficient as the larger vehicle, enabling the GMV 1.1 to travel up to 450 miles over level ground at an average speed of 40 mph. The Flyer’s mission profile includes light strikes, reconnaissance, personnel rescue and recovery, and communications support. A ring mount with a 360-degree traverse will handle several weapons, including light and heavy machine guns, Gatling guns and chain guns. The vehicle also will accommodate up to five litters for casualty evacuation. A four-door armored variant offers room for up to six troops while offering substantial ballistic protection.

“General Dynamics established a partnership with Flyer Defense, LLC, in 2011 because we anticipated the GMV 1.1 program,” Ridley commented. “Flyer Defense had created a smaller version of the vehicle, the Flyer 60, so named because it’s 60 inches wide. General Dynamics has a lot of experience with lightweight, internally transported vehicles, and we recognized the superiority of Flyer Defense’s base design. We teamed to go after this vehicle class.”

While the Flyer 72 fits inside the MH-47 Chinook and CH-47 Chinook, the 60-inch variant can be carried in the MV-22 Osprey, the tiltrotor variant flown by Air Force Special Operations, as well as most other large transport fixed- and rotary-wing aircraft.

Ridley added that the team encountered no significant technical issues when developing the Flyer 72. “The Flyer is state-of-the-art, but it contains money-saving commercial off-the-shelf (COTS) components. It utilizes a GM engine and transmission, the same systems found in many cars and light trucks. This translates into high efficiency. In field tests, we average double the miles-per-gallon fuel burn of the vehicles the Flyer will replace,” he said. The Flyer’s powertrain includes a dual-overhead-cam, turbocharged, intercooled JP-8 diesel engine with a Euro V direct-injection fuel system and a six-speed Tiptronic automatic transmission. The engine develops 195 horsepower with 295 foot-pounds of torque. The vehicle family concept means that the Flyer 72 and the Flyer 60 share about 80-percent common components and systems, including mission kits.

Given the success of the Flyer 72, the Flyer 60 is a leading contender for a new Advanced Light Strike Vehicle. The design already meets the program requirement and has passed operational evaluations, including the ability to roll out of a V-22 and fire mounted weapons within 60 seconds.

General Dynamics may also find itself in the military dune buggy business. The Flyer’s modularity permits the vehicle’s special operations components to be removed and the other body parts stripped down to the frame, a modification that means the Flyer may compete for the U.S. Army’s Ultra-Light Combat Vehicle (ULCV) and Light Reconnaissance Vehicle (LRV) programs. The ULCV version could weigh as little as 4,500 pounds with a 3,200-pound payload, the equivalent of nine fully equipped troops. The LRV version could incorporate armor for protection and carry up to six soldiers and an M230 chain gun. Component commonality in the ULCV and LRV versions of the Flyer would greatly reduce operational and maintenance costs because the vehicle would rely on the Flyer’s well-established spares inventory and logistical support system.

Ridley added that several international users also are interested in the Flyer. Although he did not specify customers, other sources have reported that the United Kingdom’s Special Forces received two GMV 1.1 vehicles in 2014 for evaluation as part of Project Westerley. The directorate may supplement or replace Mendacity Supacat HMT 400 surveillance and reconnaissance vehicles, far heavier than the Flyer, with a more transportable platform. 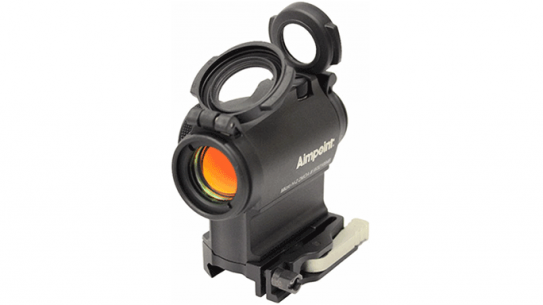