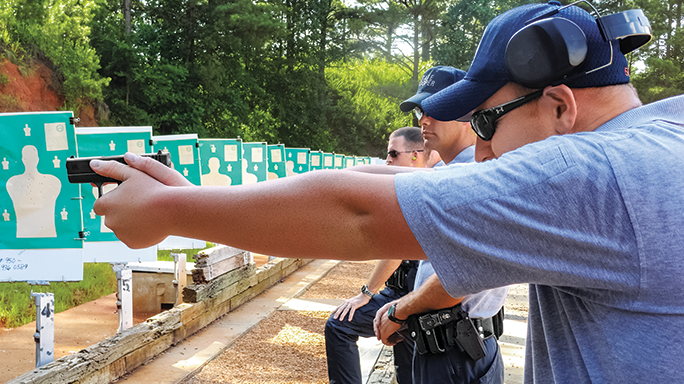 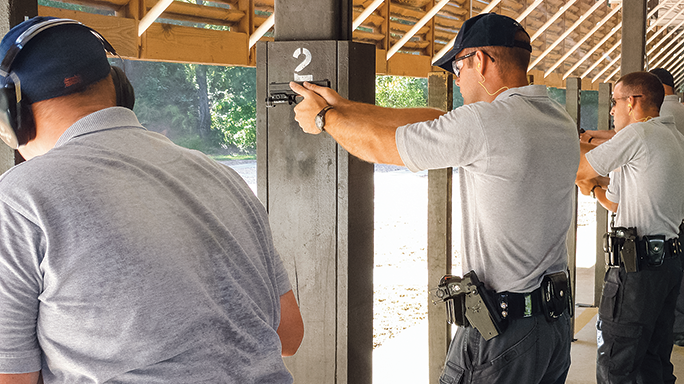 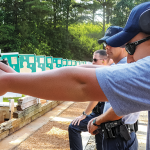 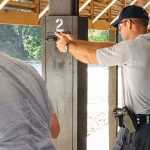 It’s no secret that a number of American law enforcement agencies have recently changed, or announced their intent to change, to the 9×19 cartridge from larger-caliber service pistols. Most notable among these is the FBI, which has indicated plans to switch from the .40-caliber GLOCKs they have issued as standard since the dawn of the 21st century to GLOCK’s 9×19 pistols. The Georgia State Patrol (GSP), however, has already gone to 9×19 GLOCKs.

Sergeant Gary Langford, the GSP’s firearms coordinator, explained that his agency had been looking to switch to the 9×19 even before the FBI announced its recent research favoring the cartridge. To understand why, let’s look back at the service sidearms the GSP troopers have carried in the past.

After a long history with Colt and Smith & Wesson .357 Magnum service revolvers, the GSP chose traditional double-action (DA) Smith & Wessons for its first foray into semi-automatic service pistols in 1989. In 1995, however, the agency went with GLOCK pistols.

The GSP’s choice at that time was the GLOCK 22 as standard issue. Before, troopers had the option of a pistol that held 15+1 rounds of 9×19 or one that could hold nine .45 AUTO rounds. The GLOCK 22 seemed to combine the best of both worlds in terms of firepower: the same 15+1 capacity as the previous 9×19, but with .40-caliber, 180-grain ammunition very similar in ballistics to the 185-grain .45 AUTO hollow points.

In 2006, the GSP became one of the first major law enforcement agencies to adopt the new .45 G.A.P. With a 200-grain Speer Gold Dot bullet at 1,050 fps, it had ample power, but the overall cartridge length was shorter than a .45 AUTO, allowing a magazine with 10 large-caliber rounds in a frame no larger than a 9×19 or .40 GLOCK, and thus capable of fitting a wider range of hand sizes. The switch to the .45 G.A.P. cartridge provided the GSP with a powerful cartridge that fit into a pistol the same general size of a .40 or 9×19. Its potent power and compact cartridge dimensions made it a sound choice.

The .45 G.A.P. lived up to expectations, said Sergeant Langford. “In all of the several shootings we’ve had with the .45 G.A.P., it performed exactly as we had expected. We had no complaints with its performance at all.”

However, in mid-2014, the decision to switch to the 9×19 was made. The agency’s transition began that August and was completed by December of 2014.

If the GSP had been so happy with the .45 G.A.P., why go to the 9×19? Sergeant Langford explained that research around the country had shown that new advances in police handgun ammunition design had particularly benefited the smaller 9×19 cartridge.

“We tested Speer, Winchester, Remington and Hornady ammunition, all to FBI protocols,” he said. “With the best 9×19 ammo, we were seeing the same penetration and very similar wound channels compared to the larger service calibers. The 9×19 recoiled less and allowed more cartridges in the magazine.”

The pistol adopted for uniform wear was the GLOCK 17 Gen4. The new pistols hold 17 rounds in each magazine, and an 18th in the firing chamber, exactly triple the onboard round count of the six-shooters of not so long ago. Like all Gen4 GLOCKs, it comes with an updated frame that offers a trigger reach shorter than previous GLOCKs the same size, and with modular backstraps that allow that reach to be extended.

According to Langford, “We leave the use of the interchangeable backstraps up to the individual troopers. We recommend that they leave the gun as is unless they have very large hands.”

Each of the pistols is issued with a holster that’s molded to fit the weapon-mounted light that is also issued. The GSP runs the G17 Gen4 with Speer’s 124-grain Gold Dot +P ammo, which is rated for a velocity of 1,250 fps. “It simply performed better than anything else in the caliber,” Langford said.

In addition to its greater round count, another advantage of a GLOCK in 9×19 is its mild recoil, the softest of any service caliber. GLOCK 17 Gen4s have now gone through training and qualifications in the hands of all 1,094 armed personnel under the auspices of the GSP. Of these, 844 of them are troopers, with the remainder being Capitol Police and Motor Carrier Compliance officers who carry the same guns and ammunition.

In the first qualification shoot after the 9×19 GLOCKs were issued, only 27 among that large number of armed personnel failed their first or second attempt to qualify, and only seven failed their third attempt and had to go receive remedial firearms training. According to Langford, this is well below the number who had to do so in the past with the larger-caliber service pistols. However, he also noted that a weeklong remedial course for the less-proficient shooters on the force, done in early 2014 with the GLOCK 37 in .45 G.A.P., may also have helped to dramatically reduce the number of failures during the qualification shoot.

When the GSP first adopted the GLOCK 22 pistol in the 1990s, troopers quickly discovered the advantage of using a “baby” GLOCK 27 in the same caliber for backup duty. If their primary GLOCK was lost in a fight or shot out of their hands and they had to resort to the smaller.40-caliber GLOCK for backup, the two 15-round G22 magazines on their belt could work interchangeably in either gun.

The GSP kept that tradition going in 2006 when it adopted the .45 G.A.P. cartridge. Each trooper was issued a full-sized GLOCK 37 duty pistol with a 10+1 capacity and a subcompact GLOCK 39 with a 6+1 capacity in an ankle holster. In this case, too, the smaller pistol would function with the larger one’s magazines should a reload be needed.

In 2014, however, this tradition was slightly altered. Each trooper was still issued two GLOCKs, but now the smaller one was the slim, super-light GLOCK 42 in .380 AUTO. Why not a GLOCK 26 subcompact that could share the GLOCK 17’s spare magazines?

Langford explained, “We found that a lot of troopers were not carrying their backup because they felt the GLOCK 39 was a tad heavy on the ankle. It was our determination that a smaller, flatter pistol would be more likely to be carried constantly by more of our personnel. When we decided to go with the GLOCK 42, we felt it was sufficiently small and easy to carry that we could mandate wearing it along with the service pistol. We issue it with a locally produced ankle holster as well as with 90-grain Speer Gold Dot .380 AUTO ammunition.”

In June of 2015, it was announced that the GSP would replace the G42 with the recently introduced GLOCK 43, chambered for the full-power 9×19 cartridge. Barely larger and heavier than the G42 that had proven so successful for backup, it gave the troopers a quantum leap in the potency of their last-ditch backup handguns.

Reliability is a non-negotiable baseline in a police duty weapon, and the GSP’s GLOCKs, new and old alike, have performed admirably in this regard. Having run some 1,100 personnel through training and qualifications with the G17 Gen4 and the G42, Sergeant Langford said that both of the new pistols have worked “flawlessly.” Many experts have postulated that the 9×19 GLOCK 17 design is the world’s most reliable semi-automatic pistol.

Every armed member of the GSP will shoot multiple times per year, with hundreds of rounds per session. In addition to regular qualifications, they shoot tactical courses focusing on real-world survival skills, such as shooting from the front seat of a patrol car.

Having chosen one of the most street-proven duty loads, the firearms training staff of the GSP is comfortable with having replaced its large-bore GLOCKs with the 9×19 GLOCKs. As a result of the change, the cartridge capacity is up to 18 from 11, a quantum leap for officers in the field. Should a trooper be involved in a high-volume gunfight, the loaded duty pistol and two spare magazines provide each uniformed GSP member with 52 rounds at their disposal, compared to 31 with the larger-caliber pistols. Range scores indicate the troopers are finding the smaller-caliber service pistols more “shootable” due primarily to their lighter recoil.

The GLOCK 17 Gen4 has already proven itself where it counts for the Georgia troopers—on the street. Shortly before this article was written, the department logged its first shooting with it. A suspect used his automobile to attempt to run over a trooper. The trooper fired a single round from his 9×19 GLOCK. The 124-grain Gold Dot +P bullet smashed through the windshield and into the would-be cop-killer, stopping the deadly attack decisively. In a more recent incident, a man opened fire on troopers with a .30-06 hunting rifle. At a reported range of 47 yards, a trooper shot the gunman in the shoulder with a 124-grain Gold Dot +P round from his new G17 Gen4 and instantly brought the encounter to a close. 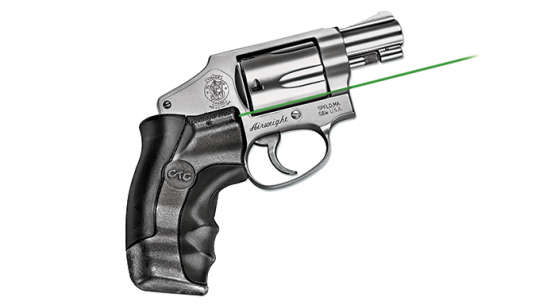 This new green laser unit ensures your deep-cover defender strikes when it counts!