Imagine finding yourself in the middle of a prison riot, outnumbered 50-to-1 and your main defense was a giant schnauzer. That’s right, a schnauzer! It is a situation STL (senior team leader) Joseph Garcia has found himself in many times, and those who know him and his dogs will bet on them every time! 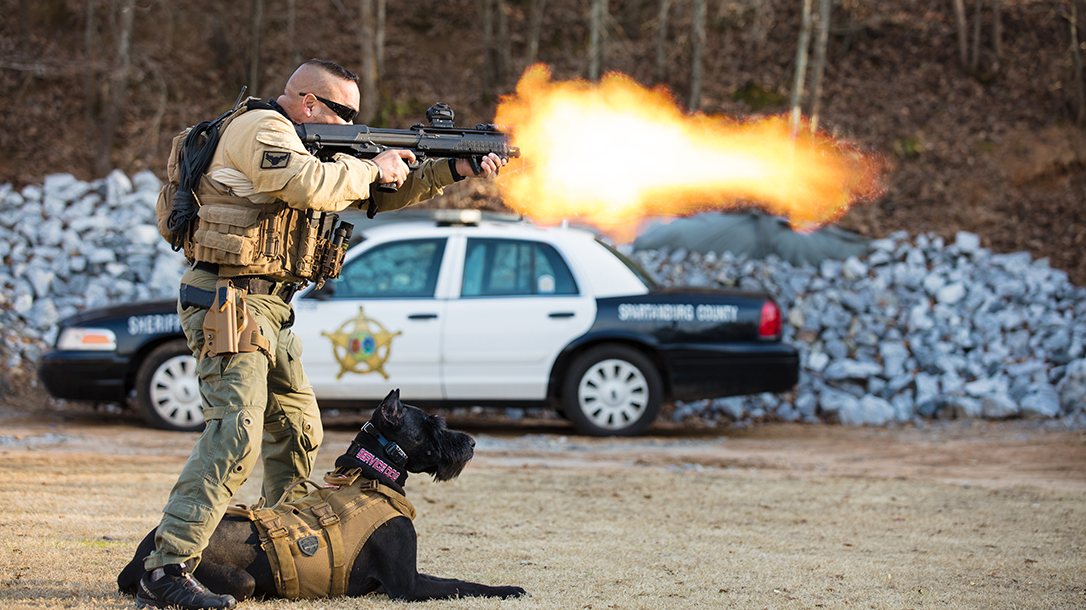 VIDEO: STL Joseph Garcia and the Guns He Uses During a Prison Riot

A senior team leader for Corrections and Special Applications Unit (CSAU-1), Garcia heads a quick-reaction team, always on standby to respond to correctional mayhem across the nation. One of the team’s strategic assets is its well-trained cadre of giant schnauzers.

Garcia is a 25-year veteran of law enforcement. He attributes his success to being in the “wrong place at the right time.” We spoke with him about his giant schnauzer colleagues for the August/September 2020 issue of Tactical Life Magazine. Below is a brief excerpt of what he said. Want to read the entire article? Grab your copy at OutdoorGroupStore.com.

Are giant schnauzers the only breed you use?

They are. They’re an exclusive breed and we use them for a number of reasons. The primary reason is temperament. These dogs can be amped up and then you, as an officer, can come up and pet that dog in the middle of a crisis and it’s not going to turn on you. That is how strong the dog’s mental temperament is.

Secondly, we selected a dog for pure size—we need size! You have to remember these inmates will roll blankets around their arms. They know the dog is coming for them and they’ll extend the arm wrapped in a blanket and use the other hand to stab the dog. We learned this over 10 years ago. That’s why when we send a dog, it won’t pay attention to the arm offered by the inmate—it’s paying attention to the laser. It is going to hit you and bowl you over, I don’t care how big or tall you are. If you get hit by a 124-pound dog, and it is going to hurt.

The other thing about what makes these dogs special is that if you look at the giant schnauzer, its jawline is shaped almost like a C-clamp, versus a V like a shepherd or mali has. The malis and sheps have a bite strength between 200 and, maybe, 300 psi. Our giant schnauzers are coming out of the box at between 400 and 450 psi.

They are breaking and crushing bones when they make a hit. Malis and sheps like to corn cob and rip when they bite. When a giant schnauzer bites a human being and gets a grip on a leg, it automatically goes into a crush. Every person I’ve seen get hit by one of our dogs screams for their life. I have never heard an inmate get hit by one of these dogs and remain silent.

Want to learn more? Watch the exclusive video above. Also, read the entire article from the August/September 2020 issue of Tactical Life Magazine. Digital and print subscriptions are available now at OutdoorGroupStore.com.