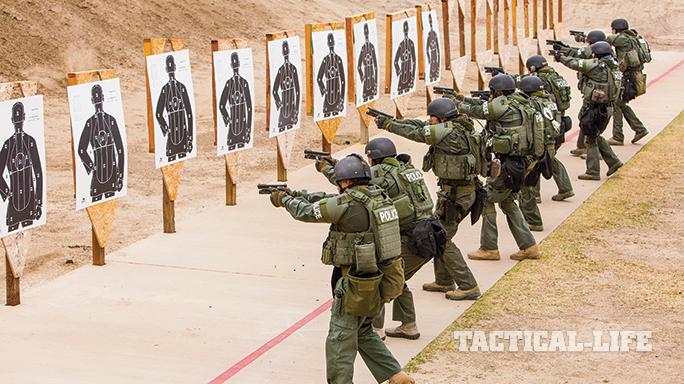 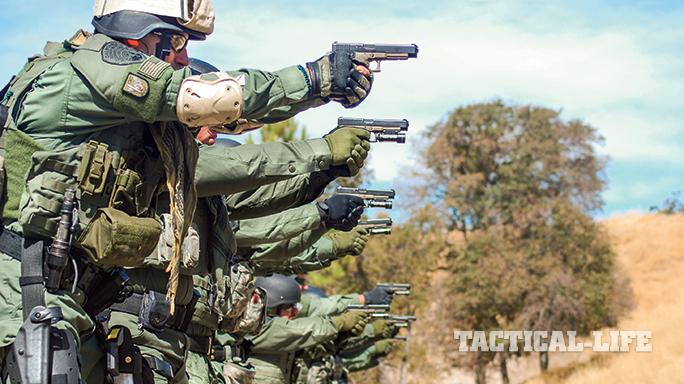 2 of 5
GLOCKs in the Country’s Largest Prison System
CRT agents of the Sierra Conservation Center, a prison in California, shoot their GLOCKs. 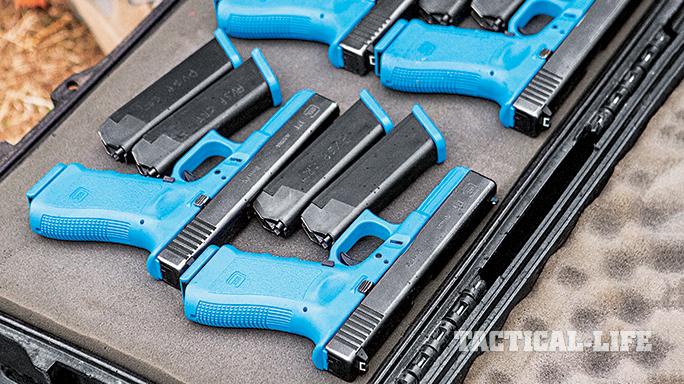 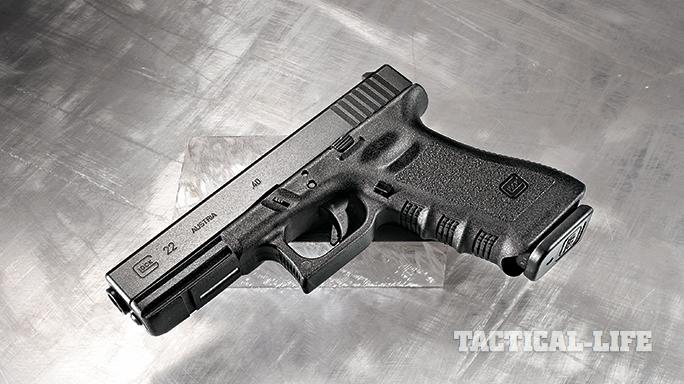 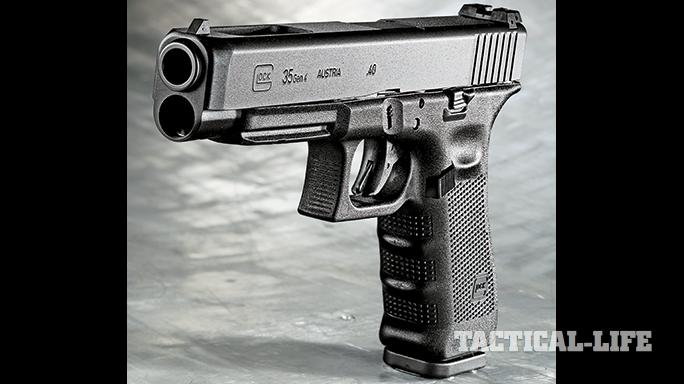 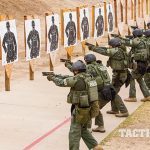 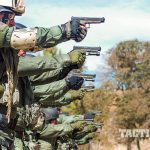 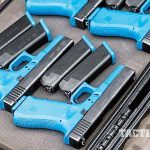 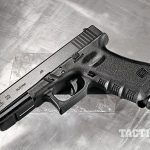 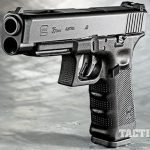 On Feb. 2, 1848, Mexico signed the Treaty of Guadalupe Hidalgo, concluding the Mexican-American War and ceding to the victorious Yankees a chunk of land out of which were eventually formed seven states—New Mexico, Arizona, Nevada, Utah, Wyoming, Colorado and, largest of all, California. On Sept. 9, 1850, the latter territory, flush with gold-hunting ’49ers, became the Union’s 31st state. It was, from the start, a wild, wooly place, populated by gold miners and claim jumpers, vaqueros, cattle rustlers and gamblers. Places like San Francisco’s notorious Barbary Coast provided just about anything money could buy. Early on, state officials developed a prison system for the incarceration of convicted criminals, the first being a prison ship in San Francisco Bay in 1851 that housed 30 inmates. These inmates helped construct nearby San Quentin State Prison, which opened in July of 1852 with 68 convicts. Next, in 1880, came Folsom State Prison, located near Sacramento, the first maximum-security institution with electricity. Since then, the State of California has constructed 31 additional correctional facilities holding today a combined population of some 165,000 adult offenders.

Security and law enforcement are two of the most important responsibilities that today’s California Department of Corrections and Rehabilitation (CDCR) has, and as such, the department retains a staff of some 32,772 employees—sworn peace officers who possess full police powers. State correctional officers (which includes the supervisor ranks) make up approximately 29,000 of these positions; the remainder consists of state parole agents or criminal investigators. That makes the CDCR the second-largest LE agency in the U.S., behind the NYPD, which has around 34,000 sworn members.

For many years, the CDCR armed most of its employees with double-action revolvers chambered in .38 Special. In the 1990s, the feeling grew that the venerable wheelgun did not meet then-current law enforcement standards, as many U.S. LE agencies had transitioned to semi-automatic handguns in the late 1980s. CDCR officials didn’t want their officers out-gunned, carrying slow-to-reload, six-shot revolvers, along with 12 extra cartridges in speedloaders, when they could be carrying 15-shot semi-autos with two extra magazines, adding up to 45 rounds per officer. One CDCR unit, the Crisis Response Team (CRT), transitioned to a semi-auto in 1993.

In 2007, the Office of Correctional Safety (OCS) received a number of requests from wardens around the state to convert from revolvers to semi-autos. The following year, the OCS Emergency Operations Unit (EOU) formed a task force consisting of eight subject matter experts representing the CRT, the Investigative Services Unit (ISU) and the Transport Unit (TU). The task force evaluated four separate handguns and confronted issues such as caliber and ammunition, instructor and transition training, qualification, procurement, equipment needs and logistics. In the end, the information gathered, combined with recommendations from the task force, resulted in the selection of  .40-caliber GLOCK pistols as the optimum handguns for CDCR use.

Due to differing strategic considerations, it was decided that the GLOCK handgun for use by institutions and CRT negotiation elements would be the conventional, service-style GLOCK 22, while the CRT tactical elements would be issued the GLOCK 35, which, although cataloged as a sporting handgun, has excellent rapid-fire and multi-target engagement capabilities due to its 5.31-inch barrel and improved accuracy thanks to its longer sight radius. Both handguns have 15+1 standard capacities.

In October 2008, the EOU launched a 120-day pilot program at San Quentin. The test involved 32 G22s and 23 G35s, along with 90,000 rounds of .40 ammunition. A number of previously issued semi-autos were used in an exchange for the GLOCK pistols. The pilot program was designed to evaluate the weapons exchange and training process, the handgun qualification course and the durability and usability of the equipment. The San Quentin CRT also conducted a qualification course using the G35. The pass rate was 100 percent, and there were no reported weapon, magazine or equipment failures.

Later, the EOU’s Tactical Firearms Instructors (TFIs) gave the San Quentin Transport Unit a two-day transition course on the G22 autopistol. The TU officer’s position is unusually dangerous, as unit members must transport inmates outside of the institution for medical procedures, court appearances or transfers. Many escape attempts occur during transportation, and officers may also encounter outside elements assisting the inmate’s flight. With escape attempts sometimes come deadly force incidents. All but one TU officer passed the new qualification course with a score of 80 percent or better. Then the EOU-authored policy gave participants in the pilot program the authority to qualify with and carry the GLOCK autopistol.

The training on and issuance of GLOCK autopistols to peace officers within the CDCR has been implemented in phases. During phase one, the chief of OCS approved the weapons authorized for use by CRT and OCS officers. The G35 (420 total) was selected for the CRT tactical element, and the G22 pistol (99 total) was issued to all 19 CDCR Crisis Response Teams. Additional G22s were procured for OCS peace officers. During quarterly qualifications, OCS peace officers (126 total) must pass a 60-round tactical course with a score of 80 percent or better, while CRT officers must shoot a 90 percent or better on the more difficult 45-round CRT course. The new 45-round course (called the SAH Basic Course) has three shooting distances at 3, 7 and 15 yards, and requires starting from a secured holster and moving laterally, encouraging officers to shoot and move during a deadly force situation. The SAH Basic Course will be used during all future transition phases to semi-auto pistol use.

California’s fiscal issues have delayed the implementation of phase two, which will see 32 institutions transition to the G22. The process will also involve the rewriting of the transition lesson plan, a revision of policy and the certification of new tactical firearms instructors. When the CDCR is given the “green light,” CRT TFIs will begin the transition training for officers assigned to Transportation, K9 Units, Armories/Range and Investigative Service Units. Transition training for the Department of Adult Institution’s (DAI) peace officers incorporates a manipulation-skills checklist and a written test that must be passed with a score of 80 percent or better. Phase three will see the transition of the remaining DAI peace officers to semi-automatic handguns and the replacement of over 5,000 revolvers with GLOCK autopistols. The phase is expected to take three years to complete.

Following the first transition training course, a survey was given to the participants, and two comments summed up the opinions of participants on the GLOCK pistol. “The weapon is very much a deterrent over the .38 revolver in just its presence,” one officer wrote. Said another, “With the types of weapons on the streets nowadays, it is good to know I can protect myself and my partner. Perpetrators will now think twice before trying to attack us.”

The author would like to thank Lt. Shawn Brown of the Office of Correctional Safety, Emergency Operations Unit and the California Department of Corrections and Rehabilitation for their assistance. 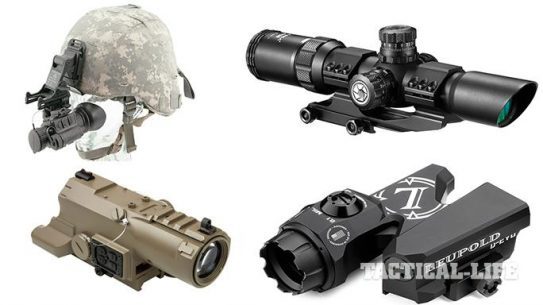 Never miss a shot with these cutting-edge new sights and optics built for handguns,...