Every few years, Hollywood hits a home run with the firearm’s community. Like many, I remember the guns more than the actors or the storyline. Who doesn’t remember Miami Vice with Crocket’s Bren Ten and Ricardo Tubbs’ S&W Bodyguard?

One of the most popular lawman TV series in recent years was the FX series Justified, which took place in Kentucky just like the HARM training course I attended. Based on Elmore Leonard’s Fire In The Hole series of novels, Justified was created by Graham Yost and first aired in 2010 and ended in 2015. The star of Justified was U.S. Marshal Raylan Givens (played by Timothy Olyphant), who was backed up by his Chief Deputy Art Mullen, played by Nick Searcy.

The plot revolved around Givens being assigned to Harlan County, Kentucky, where he grew up. Upon returning, he was faced with his father, Arlo, played by Raymond Berry, who had spent a lifetime building a criminal enterprise in Harlan. To compound Raylan’s issues, his best friend from high school, Boyd Crowder, played by Walton Goggins, was in the process of building his own “business.” From the first episode, the chase was on to bring law and order to Harlan.

Guns and gunplay were prevalent, and the selection of firearms kept us viewers busy. While there was the normal cast of Glocks—the Marshals Service duty weapon—Colts, Berettas and Sigs were scattered throughout the series. In the first season alone, 20 different pistols, four different revolvers, seven different rifles and 10 different shotguns were used. And to top it off, a LAW rocket, an RPG-7 and an M67 frag grenade were thrown in to add a little oomph!

In the long gun category, the usual suspects made routine appearances with various AR and AK variants showing up along with those nasty pistol-grip shotguns. Submachine guns included MACs, Uzis, MP5s and even the TEC-9.

In the Justified episode “Blowback” (S1E08), a Lexington SWAT officer uses a Beretta 92 fitted into a Corner-Shot stock. In “Outlaw” (S4E08), a Steyr Scout makes an appearance and in “Whistle Past the Graveyard” (S5E8), the Steyr TMP shows up in the hands of a cartel soldier. One appearance that warmed my heart was in “Thick as Mud” (S3E5), when a storeowner draws down on the bad guy with a Remington 870 Witness Protection model. Throughout Season 3, bad guy Robert Quarles, played by Neal McDonough, carries a replica of an FIE Titan in an extendable arm brace that is reminiscent of Robert De Niro in Taxi Driver.

Justified is great entertainment with crisp dialog, tremendous character development and edgy storylines. The cast is faced with ghosts from their past, ethical conflicts and an uncertain future. Drugs, corruption, sex, death, violence and gunplay abound. However, it is fiction and that ensures Raylan can drink on duty and get in multiple shootings without being drug tested, placed on administrative leave or attending counseling. Rest assured, Olyphant owned the part of Raylan Givens! He could say more with a nod and an expression than most of us can express in 1,000 words. 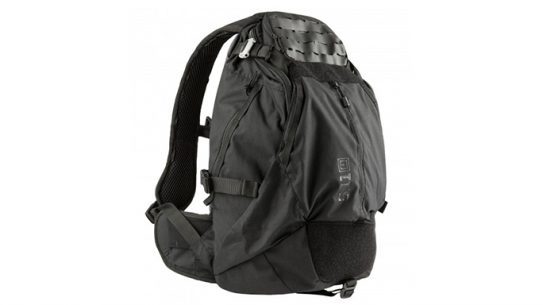 The all new Havoc 30 Backpack from 5.11 Tactical is made from highly resilient...