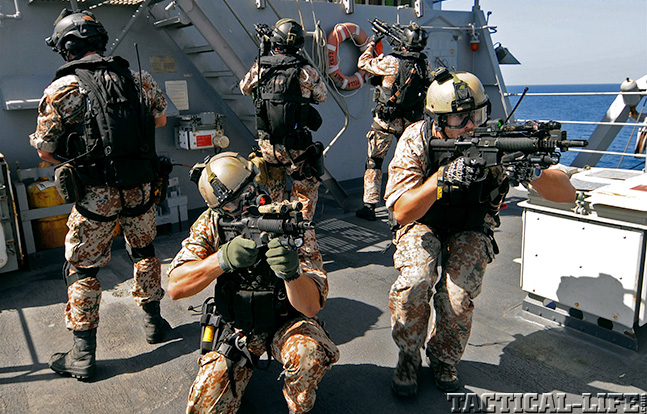 With a long seafaring tradition, it is not surprising that the  Fromandskorpset (FKP), Denmark’s frogmen/combat swimmers, have an especially good reputation. Based on the British Special Boat Service (SBS) when it was formed in 1957, the FKP comes directly under the Danish Navy’s operational command. Their missions include reconnaissance, sabotage of enemy installations or ships, counterterrorism, combat boarding, combat search and rescue, and direct action. The FKP also works with Danish police when combat divers are needed, and for raids involving small boats. Additionally, the FKP performs VIP protection, especially carrying out underwater searches for explosive devices and protecting residences or other buildings on shorelines. The FKP is also responsible for handling terrorist attacks on oilrigs in Danish portions of the North Sea.

Getting into the FKP is rigorous, with 500 to 600 candidates attempting selection and training yearly, with less than a dozen usually making the unit. To apply, a candidate must pass a rigorous security check. He must also speak English as well as Danish, and be 30 or younger if enlisted and 35 or younger if commissioned. It is necessary to pass both physical and mental tests. The physical requirements include running 2.8 kilometers in less than 12 minutes, completing a 70-kilometer march carrying 10 kilograms of weight, and swimming 300 meters in less than eight minutes. The basic training course lasts for nine months and includes scuba, combat swimmer tactics, rescue swimmer training, survival, parachuting, helicopter insertions, small-boat handling and insertions, land and underwater navigation, rappelling, close combat, demolitions and small-unit tactics. FKP operators specialize in using Klepper canoes in two-man teams. Although the FKP has trained with many other naval special warfare units, it has especially close ties with British SBS and U.S. Navy SEALs. FKP members, just like U.S. Navy SEALs, have to make it through “Hell Week” as part of their selection.

“Getting into the FKP is rigorous, with 500 to 600 candidates attempting selection and training yearly, but less than a dozen usually make the unit.”

Prior to 9/11, FKP strength was reportedly around 40, but soon afterwards it rose to 60. More recently, the unit has reportedly risen in strength to around 100. The best-known Danish combat swimmer is Frederik, Crown Prince of Denmark, who completed selection and training under a nom de guerre. However, the most famous Danish member of a special forces unit was Anders Lassen, who won the Victoria Cross with the British SAS during World War II.

Allied special operators have been impressed with the FKP’s operations in Afghanistan. The Hindu Kush is a long way from the Baltic, where the FKP would have carried out raids against Soviet shipping ports had the Cold War warmed up. Home defense has always been an important mission for the FKP as well, as Denmark has more than 4,500 miles of coastline. During the First Gulf War, the FKP was involved in boarding ships suspected of smuggling arms to Iraq, but did not take part in the ground fighting. More recently, FKP operators were also deployed as part of Operation Iraqi Freedom.

Within the Danish Army are two special operations units. One of these is the Jaegerkorpset (JGK), the equivalent to U.S. Army Rangers. Approximately 150 operators serve in the JGK, identifiable by their maroon berets, which have badges of a hunter’s horn. Jaegers have similar missions to the FKP, though primarily on land. These include unconventional warfare, special recon, direct action and counterterrorism. Based on experience in WWII of resistance against the Germans, guerrilla warfare is emphasized in JGK training. To be selected for Jaeger training, a candidate must already be serving in the armed forces.

Candidates for the JGK must spend two weeks being evaluated for physical ability and other skills prior to training. Much of the culling occurs during the eight-week Patrol Course, which emphasizes land navigation, extended small-unit tactics and fieldcraft. An additional six-week course pushes the candidates to learn survival, escape and evasion, and long-distance marches to test their endurance. Upon completion of this course, a candidate earns the bugle beret-badge. Jaegers then complete two-week basic parachuting and basic combat swimming courses to complete initial training.

The JGK has served alongside the FKP in Afghanistan as part of Task Group Ferret in the Kandahar region, often in small, long-range recon patrols.

Another unit that works closely with the JGK and FKP is the Special Support and Recon (SSR) company. Although part of the Home Guard rather than the regular army, the SSR is considered a very elite unit, which is trained for the long-range recon and surveillance role. This unit would have an important behind-the-lines mission should Denmark be invaded. Members of the SSR receive similar training to the JGK, including combat swimmer training for infiltration along Danish coasts. One indication of the elite status of the SSR is that the unit often trains with 21 and 23 Special Air Service Regiments, the TA (Reserve) portion of the SAS.

An especially interesting special ops unit is the Slædepatruljen Sirius (Sirius Sledge Patrol), which conducts long-range recon patrols in northern and eastern Greenland. Part of the Danish Navy, the Sirius unit patrols in two-man teams, deployed for up to four months at a time. Should invaders land on Greenland, the unit is trained primarily to carry out reconnaissance, but Sirius operators are also trained in unconventional warfare. The Siruis Sledge Patrol can trace its beginnings to 1941, when operatives discovered a German weather station, subsequently destroyed by U.S. bombers from Iceland. The Sirius Patrol also functions as park rangers for the giant national park located in Greenland. Patrol members also assist with various scientific studies there.

Six-dog sled patrols are normally deployed. As the teams are out for months at a time, approximately 65 huts are located around the patrol area, resupplied by small boats or aircraft. These huts are a prefabricated design that requires about 50 man-hours to assemble and prepare for occupancy.

Selection of the Sirius Sledge Patrol is rigorous, both physically and psychologically. The latter is important since the two-man patrols may not see another human for months at a time. Once selected, training includes a five-week survival course in Greenland, a shooting course, a demolitions course, an engine and mechanics course, a reconnaissance course, a firefighting course, a radio and communication course, an advanced first-aid course, a sewing course and a truck operator’s course. An understanding of the nutrition needed for Arctic operations is important as well, since Sirius operators normally consume 7,000 calories per day and their dogs digest 5,000 calories. Sirius dogs are bred by members of the unit to be especially hearty and strong. Prince Frederik also trained with the Sirius unit. His reputation is such that his combined service in the FKP and Sirius unit have given him great credibility as the future monarch.

Members of the patrol build their own sledges, which gives them the knowledge to repair them in the field if necessary. During a typical patrol season, a two-man patrol will travel 4,000 kilometers.

One other unit, civilian, but working closely with the FKP and JGK, is the Politiets Aktionsstyrke (AKS), which is the Danish police national SWAT team. The AKS is responsible for counterterrorist operations within Denmark, though the FKP or JGK could be called upon to assist, and the AKS trains with the military units. Reportedly, the AKS is often tasked by the Danish Security Intelligence Service. The AKS has a strength of around 100 officers. They use the Heckler & Koch USP, and for assaults, they are equipped with HK MP5s as their primary weapons.

As with many special ops units, those from Denmark have a choice of weapons. The standard rifle is normally the Diemaco C7 or C8 with a Trijicon ACOG or ELCAN optical sight. The principal handgun is the HK USP in 9mm or .45 (FKP). As with many combat swimmer units, the FKP uses versions of the HK MP5, including suppressed MP5SDs. Shotguns include the Remington 870 and Benelli M1014. The FKP puts a lot of stress on sniping, and unit snipers have available the Knight’s Armament SR-25. Sako TRG-42 sniping rifles in .338 Lapua with folding stocks are available as well. For greater firepower, the M249 LMG is the perfect choice.

One special weapon used by the FKP is the HK P11 pistol. This underwater pistol fires 4-inch 7.62mm darts from a 5-inch barrel unit that must be replaced after the five rounds have been fired. Ignition is electronic. Range underwater is usually given as 10 to 15 meters and about 30 meters out of the water (if used as the swimmer emerges from the water and must engage).

Many of the same weapons are used by the JGK and the SSR. The Bofors AK5, the Swedish version of the FNC rifle, and the HK G3 are also used. Suppressed USP 9mm pistols are used by all of the Danish military units when a suppressed weapon is needed. Also available are Glock 17 and Glock 19 pistols. In addition to the TRG-42, the HK417 “sniper” model is used. Also available is the MRG M/95, the Danish designation for the Barrett M95 .50-caliber rifle. Although this rifle is used primarily in the EOD role to explode IEDs or other munitions, Danish snipers can use it as needed. However, the primary long-range rifle remains the .338 Lapua TRG-42.

“This underwater pistol fires 4-inch 7.62mm darts from a five-inch barrel unit that must be replaced after the five rounds have been fired.”

Because they are more likely to encounter hungry polar bears than enemy troops, members of the Sirius Sledge Patrol carry Glock 20 10mm pistols and bolt-action rifles. In the past, I was told by a Danish friend that the Sledge Patrol used Danish Madsen M47 .30-06 bolt-action rifles. These would appear to have been a good choice as they were light and fired a cartridge known to stop bears. On the other hand, they are also known for their recoil, so heavy arctic clothing would have been appreciated. Currently, the unit has Sako TRG-42 rifles. Prior to adopting the Glock 20, the Sirius Sledge Patrol used Sig Sauer P210 pistols, which though excellent, often didn’t seem to impress angry polar bears!

There is a tendency to think of the Scandinavian countries as laid back, socially progressive states with armed forces that train but don’t fight. Afghanistan and Iraq have belied this premise in the case of Danish special operators, who have impressed their U.S. and British counterparts. Danish special operators can trace their lineage to the vikings, Anders Lassen and the WWII resistance, but they are making a new history for themselves in the mountains of Afghanistan and elsewhere in the Global War on Terror. 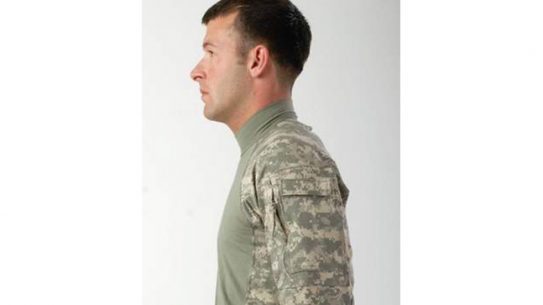 ACUs Getting Shoulder Pockets with Zippers

Starting in 2015, the Army will replace the current top-opening pockets with side-opening zipper...