The MP5, a smooth-shooting German submachine gun (SMG), has quite a following. It’s been the SWAT gun of choice for decades. It’s employed in the US and overseas by hostage rescue units, special police units and military operations groups. Only a few of us don’t rank it highly for those applications. Those who do are in the overwhelming majority and have the experience to back up their choice. 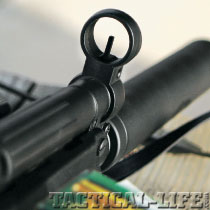 One of the major components of its success was due to Heckler & Koch’s Training. HK had a dedicated training unit and they had superb programs. The MP5’s overwhelming popularity in the US had at least as much to do with their training as with the gun. Not that the gun was poorly constructed or designed; I’ve seen and handled examples of HK’s prizes, and they are fine firearms. Part of what made the MP5 so popular was its smooth operation and reliability. Otherwise, why would one take a 9mm SMG instead of an assault rifle?

Designed back in the 1960s, it was a component of a larger commitment by HK to “cover the ground” in military handheld armaments: rifles of 7.62x51mm, 7.62x39mm, 5.56x45mm and a machine pistol in 9mm. The MP5 and variants are made in a number of countries under license with HK. They are used by government forces in countries such as Afghanistan, Pakistan, Iran, El Salvador, China (Hong Kong Special Duties Unit), Mexico, South Africa, and Vietnam.

They’ve been used by Delta, SEALs, FBI, DEA, state law enforcement agencies, and many others. My former department had a few MP5s, including an SD (suppressed). Their use by British SAS and several US units also increased their popularity.

Like anything else, when costs go up, corners are often cut. Government is no exception. We try to find ways to make do with less or come up with inexpensive ways to accomplish our goals. We’ve done that with shooting. One way is to adapt our centerfire duty guns to accept cheaper and commonly available rimfire ammunition. The team at my former agency found that Advantage Arms uppers and magazines effectively converted our Glock 22s to .22LR. The chief trainer at the time, Jack Morgan, used the Advantage Arms units with newly hired folks who had no gun experience. He stretched his .40 caliber ammo supply while teaching the mysteries of trigger control to rookies.

GSG-5 Details
Likewise, .22LR uppers for AR-style carbines come in handy. American Tactical Imports now has a solution for those armed with the MP5 series of submachine guns. They are bringing in the German Sport Guns GSG-5, an MP5 lookalike. After spending some time with one, I can report that it’s quite faithful to a semi-auto-only MP5 and it’s a load of fun to shoot.

The .22 clone is chambered for .22LR high velocity ammo. Using standard velocity stuff will likely cause sluggish operation. The issued magazine was capable of holding 22 rounds of ammunition. If you’re in a “magazine ban” state, American Tactical Imports can hook you up with 10-rounders. The GSG-5 carbine is a recoil operated semi-auto. The barrel, including the part under the fake suppressor, is just over 16 inches long. The gun’s overall length is just below 34 inches. It weighs in at 6.7 pounds.

Operation is straightforward. The magazine has a gripping surface on each side corresponding with the follower. Pull down on the follower and loading ammo is a snap. The magazine catch should be used with feeding the magazine into the carbine and has to be used to release the magazine when it’s empty. The cocking handle is on the left side of the fore-end. The bolt holds open on the last shot fired. The GSG-5, unlike its submachine gun cousin, has a magazine disconnect feature. The gun won’t fire without a magazine in place.

No parts interchange between the rimfire clone and the original product. They’re different animals except for appearance and some handling features.

The barrel diameter is small, which helps to save weight. The non-suppressor lookalike is there to make the gun look “right.” Otherwise, you’d have a small tube protruding some distance out of the receiver to make minimum legal length.

Speaking of parts, the HK optics mounting will likely work to attach a reflex sight or other optic. The safety and its operation will not surprise MP5 users. It is ambidextrous with a lever on each side of the receiver. The trigger is serviceable. It’s not a target trigger and that’s okay. The rear sight is the HK-style rotating drum. A reasonably wide blade inside a protective ring comprises the front sight.

Shooting & Training
I used every aperture and the notch on the drum rear sight at 50 yards and all I seemed to hit was earth. Finally, with one aperture and holding the front higher than I thought should be necessary, I was rewarded with the clang of target steel. I repeated the process about 20 times before moving out to the 75-yard targets, a disc and rectangle. Using the same hold and the same aperture, the GSG-5 hammered steel with every shot until I got tired.

The distant targets were in front of another firing point. To smack these, I’d have to shoot at a slight diagonal across the range. This naturally increased the distance, but it was no trouble for the GSG-5.

The accuracy test I performed was only at 25 yards and used one type of ammunition. I was able to take a kneeling bench rest and put five rounds of Federal Classic .22LR High Velocity copper plated solids into an inch. I thought that was quite good for this gun’s intended purpose – training. I had Winchester Super-X 36-grain hollow point, Remington Yellow Jacket cone-nosed hypervelocity hollow points and Remington 40-grain solids in their Thunderbolt promotional line.

While I had a silhouette up, I did some “failure to stop” drills from 25 yards. It was no problem to bring the piece up from ready and make the hits. The safety lever, like the original, isn’t made to my hand.
I was able to turn the gun enough in low ready that I could reach the safety lever.

Checking the target, I had 100% hits. The sights, like on the original, made those hits easy. Midway into the testing, stoppages became common. There was one particularly nasty malfunction that took a little time to clear. Some lube on the bolt and the malfunctions went away. This is a gun that likes lubrication. Another key to inducing malfunctions is to hold the magazine instead of the fore-end while shooting. I didn’t try this but know others who have.

Conclusions
The GSG-5 is a fine training rimfire. I’m sure the younger set will like it, but I’m surprised by the number of old-timers who get a hankering to shoot this subgun lookalike. You can shoot it quite fast but more important, is that the accuracy is there as well. The trigger was service grade and presented no impediment to service accuracy. While this gun is a great plinker, it’s also a good warm-up for MP5.

If you can find them, these would be a good agency purchase. I’d use them for trigger control drills and for some distance work as well. I’d save the centerfire versions for recoil control drills, qualifications and standards, as well as operational.