Clumsy, oversized and wasteful, I was convinced that machine guns were largely ineffective weapons. They made a glorious racket that sounded great as a Hollywood special effect and made my non-marksmen military brethren giddy on the range, but that was it. I was taught to regurgitate catch phrases like “most casualty-producing weapon” but I knew better. I looked past the noise at the one thing that matters — measurable results.

“Gunnery, gunnery, gunnery. All else is twaddle.” The general-purpose machine gun failed us in this dictum, even though my compatriots were blind to it. Our final exam consisted of eleven double “E” targets scattered 400 to 800 meters away, set for long exposures and engaged with 154 rounds. To the math-challenged folks on the line, this seemed an extreme range but any marksman realizes that a target just over a meter wide at 800 translates to a generous five minutes of angle and we were given 14 rounds to throw at each target. I say “throw at” because hits were a sometimes thing. In fact the Army claims you’re qualified if you down only seven targets. Missing one-third of your targets, which measure five minutes of angle in size and bigger, with 14 rounds each and you pass. Of course, my range mates’ report to the girls in the downtown pub was that they were “gunners,” along with other Army-related lies. 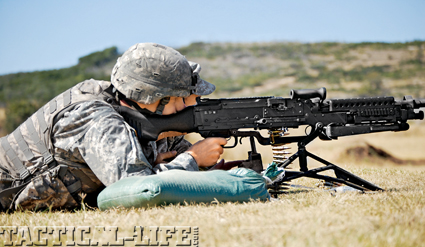 Gun crew at work. Note that gunner is mid-burst and is ready to manipulate the T&E based on the assistant gunner’s feedback.

Pointing some of this out to the odd green suiter that would listen brought the retort, “Well, how else could you hit those same targets?” A later demonstration by a Master-classified High Power shooter with an optically sighted M16A4 on the same range resulted in him taking down every target with less than one magazine of ammo. A perfect score with a rifle at a quarter the weight using one-sixth the ammo—that’s how.

Now, I don’t really believe that machine guns are ineffective, but I have seen this scenario repeated many times. The point is to get gunners to think rather than regurgitate catch phrases. Compared to a rifle, machine guns are clumsy and consume piles of ammunition so there needs to be a proportional advantage to justify their use. The advantage is there but most militaries fail to train assigned personnel to use it. 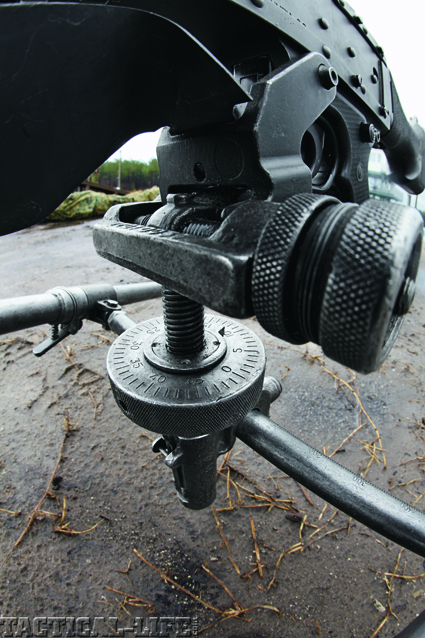 Inset of the M122 T&E. Each click is one mil and the dials are marked to record settings.

Part of the confusion with machine guns is they can be used like individual small arms, and some facets of gunnery require this. Some machine guns are also employed as automatic rifles and automatic weapons but many soldiers don’t understand the role change. Shooting a M240 like a belt-fed rifle is effective for certain applications, but this isn’t gunnery. What’s worse, the qualification course encourages this — as it only requires direct engagement of individual point targets. Find the guy complaining about how a tripod and T&E (Traverse and Elevation mechanism) is useless and you just found the non-gunner. A mortarman can’t free gun his weapon so he is forced to recognize his dependence on an observer to view the distant target area and fire direction control to translate that into a fire command to put on. With machine guns, the gun crew is the observer and FDC (fire direction control) rolled into one.