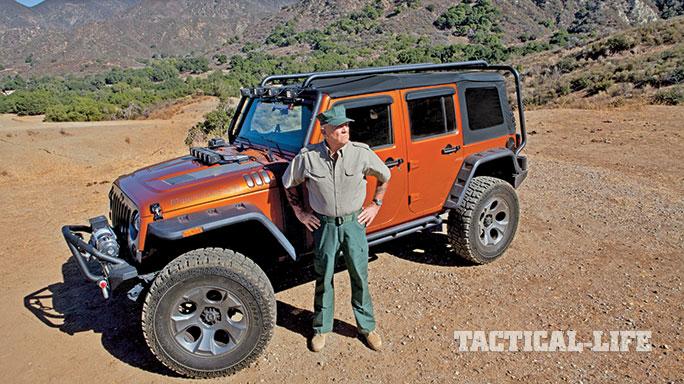 The Gunny can go way off road in his Rugged Ridge-equipped Jeep. You can bet it all that he’ll never have to take his .45 to it.
Comment(s)

When America’s favorite war correspondent wrote these words back in World War II, his comment went straight to the hearts of millions who knew exactly what he was talking about: “It does everything. It goes everywhere. It’s as faithful as a dog, as strong as a mule and as agile as a goat. It consistently carries twice what it was designed for, and still keeps going.”

Ernie Pyle’s tribute to the jeep doesn’t say it all, but it comes close. Like millions of others today, I was not available for WWII service. But I have learned a great deal about the small bug of a vehicle that was launched back then and sent scurrying around countless bases and in the field with both combat and support units.

About 650,000 copies of the original were churned out in WWII. Today, those veteran Jeeps go for big bucks, and the Jeep name lives on in countless variations you can buy fully-loaded outright, or barebones models you can rig up to your personal liking—and wallet.

There are no Jeeps like the original on duty with our military today. Beginning in 1983, when the Army opted to go the Humvee route, armor- and firepower-loaded four-wheel-drives replaced the Jeeps.

Many who knew and loved Jeeps read the news that the Army was phasing them out in 1983 with a shudder. Gone would be the beloved chariots that ran millions of errands, carried messengers, did reconnaissance over impossible terrain, could be loaded with serious firepower, and even carried out our wounded and dead.

When the Army announced the Jeep’s demise, Associated Press columnist Hugh Mulligan wrote, “No item of government issue, not even the mess kit, was more beloved than the Jeep.” His column was titled “Taps for the Jeep,” and for artwork he revived a famous WWII cartoon by Bill Mauldin, creator of the renowned “Willie and Joe” series from the Stars and Stripes newspaper.

In it a cavalry sergeant has his hands over his eyes as he points his .45 at the hood of his conked-out Jeep. He’s putting it out of its misery. The sergeant, who isn’t Willie or Joe, looks like he’s been getting in the chow line more than his turn, but his sadness is clear. So strong is the image that it was chosen as the cover of Bill Mauldin’s Army, one of several books from his WWII cartoons.

The attachment between a man and his Jeep back then was as strong as it had been between his veteran ancestors and their horses. For many of us, it’s still that way.

I had an original Jeep at one time. I even posed for pictures with it back during my Mail Call TV series. It was an old Ford original model, a renegade that had survived 192,000 miles. I sold it because in California where I live I have to get onto freeways to drive almost anywhere at all. Driving a vehicle with a 45-mph top speed was going to get me killed.

When I sold my olive-drab friend, my love of Jeeps remained in my gut. And far from doing without a Jeep, my new friends have been some of the latest models, loaded with features the original Jeep creators could never even have dreamed about. I drive these high-tech rigs anywhere, from the freeways right into the backcountry where the fish and game live.

They are provided by the folks at Omix-ADA, their Rugged Ridge group and their Alloy USA group. Together, they’re one of the leading Jeep parts and accessories companies. As their spokesperson, I get to drive a new Jeep every year with all the bells and whistles. I drive each year’s model to the Specialty Equipment Market Association (SEMA) trade show in Las Vegas, where it’s on display.

Most of the people who stand in line to meet me at the SEMA Show are Jeep owners. They have the LED lights, the running boards, the winches, the fender flares, the rust guards on the front and on their lights. They have the light rack up on top, custom seats, custom skins to go around the outside of the vehicle. These people buy a Jeep and then they go to work on it.

Despite the high-tech world of Jeeps today, I find myself reminiscing about the old Jeeps I drove as a Marine. From my roles in movies like Full Metal Jacket you may think I don’t have a single sentimental bone in my body, but I do. And sometimes I see myself as a young Marine Staff NCO during the Vietnam War, driving Jeeps all over the bases where I was assigned. I had to have those Jeeps. I had places to go, things to do, and I couldn’t hack it without my Jeep. If the Marines didn’t issue me one, I had to make other arrangements to get behind the wheel.

Over the years a lot of folks have asked me if I know where the name “Jeep” comes from. Here’s the dope: When the Army got the green light on the new vehicle in 1940, it cherry-picked the best features from prototypes submitted by three companies. These were Ford, the Willys Overland Company and the Bantam Car Company. Bantam was too small to handle the vast amounts of orders the Army needed churned out, so it was left to Willys and Ford. Willys called its model the “MA” for Military Model A. Ford called it’s the “GP,” which does not stand for General Purpose but with the “G” meaning Government and the “P” for a type of vehicle.

As long as you’re not thinking General Purpose, Ford’s GP designation may be the origin of the word “Jeep.” There was also a little character that came along in Popeye cartoons back then that was called “Jeep.”

Anyway, the name “Jeep” has been around since the early 1940s, and it will be around a long time to come for high-spirited owners who want both comfort on the road and the ability to go pretty much wherever they please. You can customize one or buy it fully loaded.

I only have one complaint. Mine has all kinds of add-on gizmos, but they wouldn’t let me mount my .50-caliber machine gun. 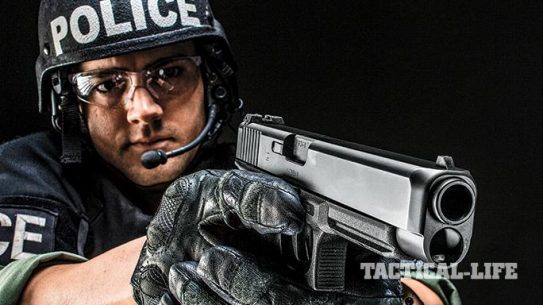