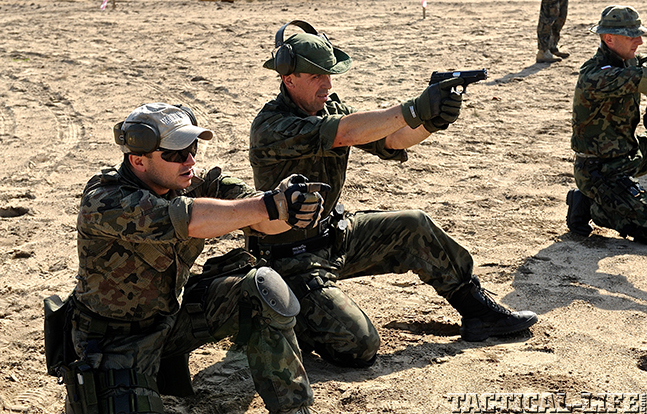 Members of the JWK undergo pistol training along with U.S. troops. The Commando is firing the Polish MAG-98 pistol. (DoD Photo)
Comment(s)

The 1st Jednostka Wojskowa Komandosow, JWK or the “1st Special Commando Regiment” in English, has the longest heritage of any Polish special operations unit. In fact, it can trace its heritage to the legendary British Commandos of World War II. To accommodate personnel from various countries that had fallen to the Germans, No. 10 (Inter-Allied) Commando was formed with troops from various countries. No. 6 Polish Troop was formed in August 1942 and integrated into No. 10 I-A Commando in October 1942. Seven officers and 84 other ranks served in the unit. After their liberation, some countries incorporated members of No. 10 Commando as the basis for their post-war airborne or special forces. This was not the case for Poland, however, though the veterans of No. 6 Troop were viewed as heroes. Far more Poles served in the 1st Independent Polish Parachute Brigade, which served with British Airborne Forces. Their tradition continued with the 6th Polish Airborne Division formed in Communist Poland in 1957.

“The competence of Polish special operations units is such that U.S. Rangers, Special Forces and SEALs and British SAS, SBS, and Commandos are confident of working with them on joint missions. That’s quite a compliment.”

Although small Polish reconnaissance units had been formed as early as 1951, the first special forces unit formed within Communist Poland was the 26th Reconnaissance Battalion, which was formed in 1961. In 1964, it became the 1st Assault Battalion. In August 1993, the 1st Assault Battalion was converted to a special forces unit: 1st Pulk Specjalny Kommandosow, or 1st PSK. The unit retained this designation until 2011, when it assumed its current designation as the 1st JWK. Although Poland has other units capable of special missions, including airborne troops, special forces (GROM) and combat swimmers (Formoza), 1st JWK personnel are trained to be “Jacek”s of all trades. Among the unit’s capabilities are air assaults using helicopters or parachutes (including HAHO and HALO insertions), special reconnaissance, direct action, hostage rescues, personnel recovery, intelligence gathering, raids and ambushes, underwater recon and attack missions, foreign assistance with internal defense, and an array of other missions. 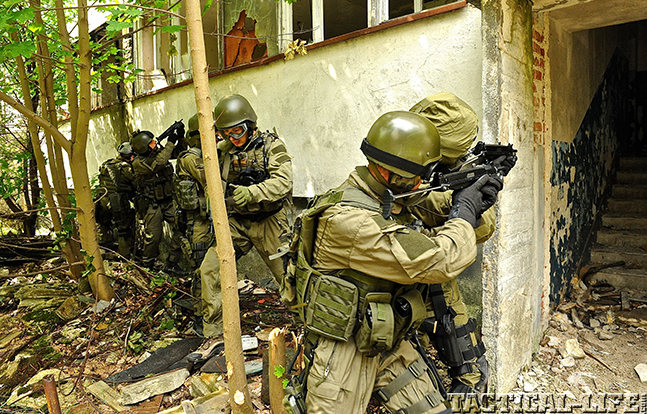 1 of 2
JWK Polish Commandos breaching
JWK operators train in building entries with members of the U.S. 10th Special Forces Group (Airborne). Note that the JWK operators are using the PM63 PDW. At least one of the PM63s appears to be set up for Simunition use based on the blue barrel and bolt. (DoD Photo) 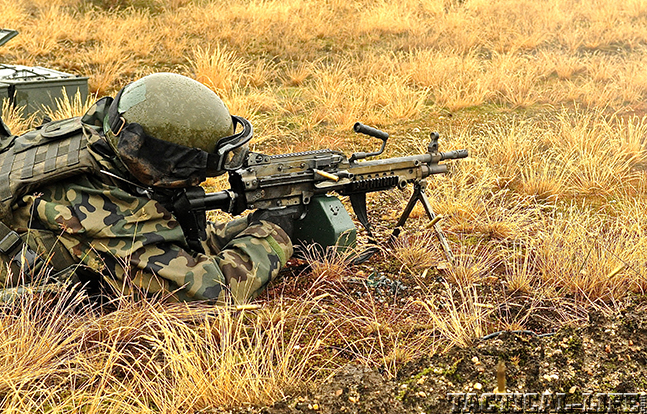 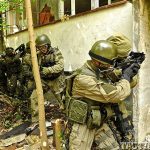 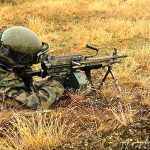 The JWK is one of five units subordinate to Dowodztwo Wojsk Specjalnych (Polish Special Operations Commando). In addition to the JWK, there is JW GROM, JW Formoza, JW AGAT—a unit specializing in operations behind enemy lines—and JW NIL, which specializes in support for special operations missions. A source told me that NIL has some missions involving the use of drones.

Candidates for the JWK must first complete a three-month basic military training course followed by a three-month selection and training course. During this training, Commando candidates learn close-quarters combat (CQC) with various weapons, hand-to-hand combat (Krav Maga), basic parachuting, land navigation, small-unit tactics, survival, combat medicine, demolitions and various other skills. Once assigned to one of three detachments (to be expanded to four), operators receive additional training in sniping, mountain and cold weather warfare, amphibious operations, combat swimming, etc. Other specialized counterterrorist and close-protection training is also given. As with the Special Air Service, U.S. Special Forces and other such units, teams within the JWK specialize in military freefall parachuting, scuba and small-boat insertions, mountain and cold weather warfare and more. In addition to the combat detachments, within the JWK there are also command and support elements. Reportedly, there are a limited number of females assigned to the JWK, but it is not clear if they are fully qualified members of the unit. The GROM special operations unit is known for having female members. 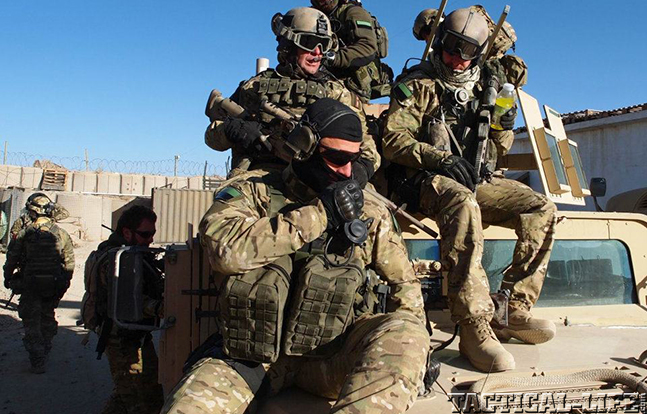 1 of 2
JWK Polish Commandos kitted up
JWK operators prep for an operation aboard one of their Humvees. (Polish DWS) 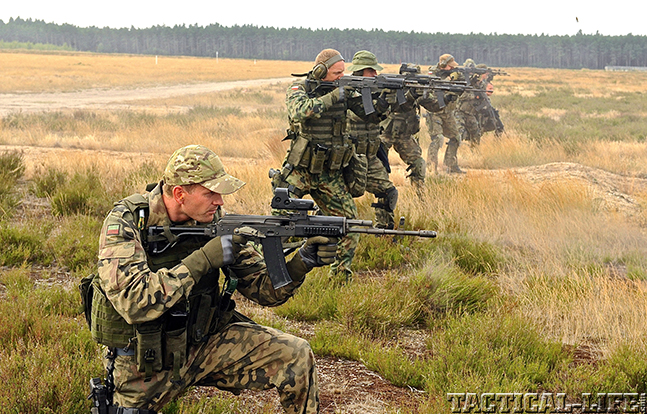 2 of 2
JWK Polish Commandos rifles
Members of the JWK train with their Beryl rifles, which have EOTech holographic sights mounted. 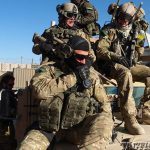 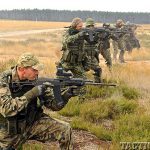 Among the weapons used by the JWK are the HK416 (including subcompact and carbine-length weapons), the U.S. M4A1, Polish kbs. wz. 1996 Beryl rifles, Polish PM-63 submachine guns, as well as the HK MP5 and FN P90 submachine guns, and sniping rifles including the Sako TRG-22 in 7.62x51mm, the Accuracy International AWM in .338 Lapua, and the Barrett M82 in .50 BMG. Along with other special operations units, the JWK has tested the Polish Bor sniping rifle in Afghanistan and has ordered a small number. Reportedly, the JWK has also used some MK14 Enhanced Battle Rifles on Afghanistan deployments.

“In August 2013, members of the JWK worked closely with the Afghan police in raids against a terrorist ring in Ghazni Province.”

Various pistols are available to Polish special operators, but for the JWK, the Glock 17 is the standard weapon, though the HK USP Tactical is also used. GROM uses the FN Five-seveN, but I am not aware of its usage by the JWK. On the HK416, the HK AG-C/GLM 40mm grenade launcher is used, while the M203 is used on the M4A1 carbine and the Pallad grenade launcher on the Beryl. The JWK also reportedly uses the single-shot HK69A1 grenade launcher. The JWK’s shotgun choice is the versatile Remington 870 Modular Combat Shotgun (MCS), which may be configured for various missions. Heavier weapons include the FN Minimi and the Carl Gustav 84x246mm recoilless rifle, as well as the RPG-76.

The JWK has seen a lot of operational use since Poland joined NATO in 1997. These have included deployment to Macedonia during NATO involvement in Kosevo, multiple deployments to Afghanistan, including working closely with the U.S. 5th Special Forces Group (Airborne), and beginning in 2010 operating as part of Task Force 50 with an array of missions in Ghazni and Paktiki Provinces. Note that Task Force 49 is staffed by members of the Polish GROM special operations unit. 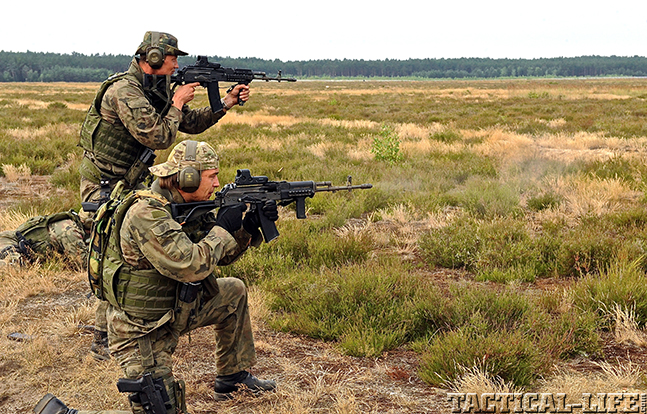 1 of 2
JWK Polish Commandos engaging
Members of the JWK train with their Beryl rifles, which have EOTech holographic sights mounted. 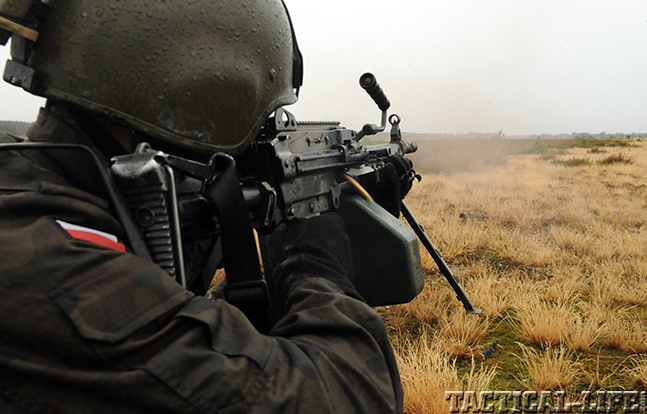 2 of 2
JWK Polish Commandos Aug 2010
A Polish Special Forces operator fires an M249 with a 200-round polymer box magazine from the shoulder. (DoD Photo) 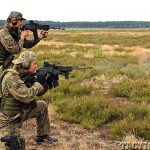 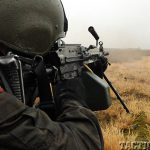 In August 2013, members of the JWK worked closely with the Afghan police in raids against a terrorist ring in Ghazni Province. Reportedly, JWK members have proven excellent trainers of Provincial Response Companies for the Afghan police and have worked effectively as advisors on operations. Members of the JWK were also deployed as part of the Multinational Division Central-South in Iraq, which was under Polish command until October 2008, when Polish troops were withdrawn. Members of the JWK proved effective but found it difficult working with the 23 separate nationalities represented in the Multinational Division, as each had its own level of training and rules of engagement. Often, detachments of a dozen or so JWK would be assigned to personal security details (PSDs) for Polish or other high-ranking officers. JWK also provided PSDs in Afghanistan. In peacekeeping or humanitarian deployments, such as to Pakistan for earthquake relieve or to the Democratic Republic of the Congo, members of the JWK have normally provided security for other Polish elements or VIP protection. 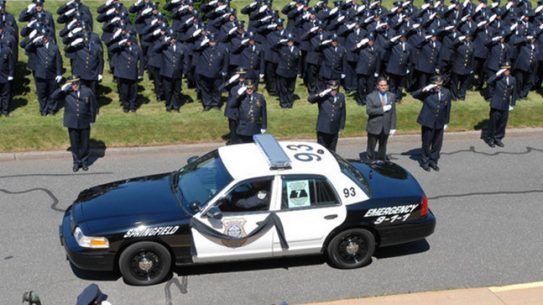 The first five-and-a-half months of 2014 has seen the number of law enforcement deaths...