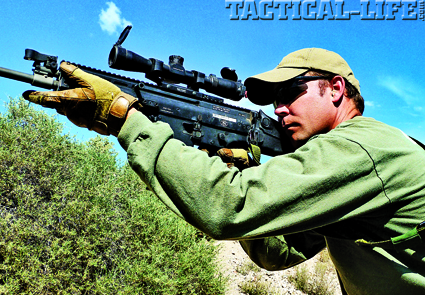 The Battle Rifle course is built around the larger .30 caliber. Walt Hasser, a former Marine, made top marks with a FN SCAR 17S.

Anticipation. Coffee steams in my cup as the dawn sky ranges from gray to purple, resolving in a magenta line on the mountain horizon backed by an azure blue. It’s morning in the Sonoran Desert of Arizona. As I roll north to Gunsite’s Battle Rifle class, the sun warms the prairie as antelope bed down.

Gunsite’s Battle Rifle is a study of the .30-caliber semi-automatic battle rifle and its proper employment in armed conflict. Compared to the 5.56mm round, the 7.62mm NATO round packs a heavier punch, offers greater effective range, is less prone to drifting in the wind and tends to find its way through things, turning yesterday’s cover into today’s concealment. The result is a class that is ideal for the LE officer looking for practical training on a big-bore patrol rifle. 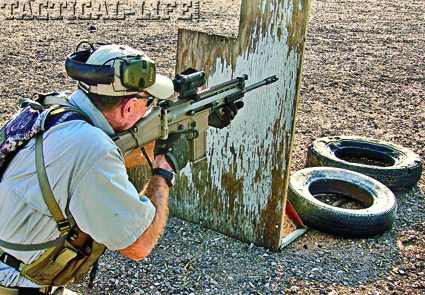 Coach Walt Wilkinson demon-strates shooting around a bar-ricade. It’s important to expose as little of yourself as possible.

We had two perennial Gunsite students in our Battle Rifle class, Charles McCrary and Mike Crew, both former U.S. Customs agents. We also had Walt Hasser of FN USA, product manager for the U.S.-based SCAR product line (and a Recon Marine). Walt’s companion, Fred Branhan, is FN USA’s SCAR armorer. He assembles and tests each weapon before it leaves the factory. If you buy a SCAR, Fred will have touched it first. Also in attendance was Lt. Col. Guy Coursey, USMC. He is an outstanding Marine and a Gunsite adjunct instructor. 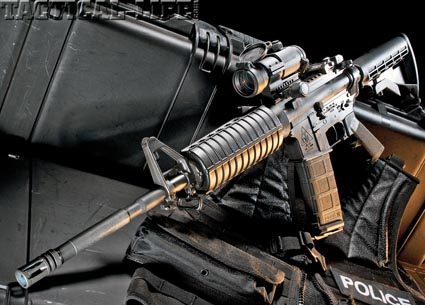 The Battle Rifle course is built around the larger .30 caliber. Walt Hasser, a…