I’d like to start by giving extreme thanks to Massad Ayoob for his article in the Feb08 issue on handcuffs. I read this and got a brief reminder of just how bad handcuffing situations can turn to harmful if not deadly. Approximately a week after reading this I had just one of those situations, and believe it or not, when I was in the midst of the call I thought of his article.

Well, it all started when another unit was dispatched to a domestic disturbance in the area. This deputy, who is a female, is rather short in stature. Don’t get me wrong; she would jump into anything as quick as many of the guys on our watch. I immediately put myself en route to back her up since no one else was available. She arrived on scene a short time later and began speaking with the victim. Just prior to my arrival she called me on our talk channel and advised the incident would be a domestic battery. She also advised that the suspect (husband) was inside the residence asleep. I thought, “Oh good, we’ll have no problems with him.” Yeah, I was completely wrong.

Upon arrival, the female deputy started gathering information on the layout of the residence, the suspect’s location, as well as a description on him. Once I was given a description of the suspect (5’9” and 150 pounds), I became even more relieved prior to entering the residence. When we entered the den area of the residence the suspect was indeed sleeping and lying in the middle of the floor. I advised the female deputy that I would get on his left side and she should get on his right. With our positioning and the element of surprise I was now feeling even better about taking him into custody.

I knelt down and quickly placed a handcuff on the suspect’s left wrist. The female deputy grabbed his right arm and attempted to place it behind his back. This however did not work, as he awoke and immediately began to resist the handcuffing. I yelled out, “Sheriffs office, you’re under arrest!” This had no effect on the suspect and he began rolling his body to his right. With only one handcuff on this guy, I thought of the article by Ayoob. I knew I was not going to let that handcuff go. I transitioned from my right hand to my left and held that cuff as tight as I could. By this time the suspect was attempting to move himself closer to a wall.

During this the female deputy was still trying to control his right side; however, with him moving she was unable to gain a good hold. The suspect, somehow, made his way to a nearby wall and was now attempting to use it to “walk” out of my hold. I should mention that during this struggle I was repeatedly grabbing the rear of his waistband, trying to pull him back to the center of the room with my right hand. The suspect was eventually able to use the wall and got partially to his knees. This gave me the perfect opportunity to use my body (6’3”, 250 pounds), and momentum to force the suspect back to the floor. I was spinning my wheels trying to figure out how to get this guy under control. I then delivered several knee strikes to the suspect’s right side and, using these I was finally able to completely place the suspect’s left arm behind his back. And should I mention I was still holding that handcuff with my left hand.

Once there I was able to pin the suspect to the floor and hold him there. The female deputy was then able to pin his right arm to the ground and she placed her entire body on top of it. This gave her the chance to request additional units to our scene. At one point she wanted to complete the handcuffing; however I was extremely winded and did not want to give this guy a chance to fight again, possibly escape or hurt either one of us. We held him there for what seemed like an hour, but I later discovered was only 55 seconds before the first additional unit arrived to assist us. They arrived and looked like angels flying into that den. I instructed those units I needed to withdraw, due to being winded, and I held that handcuff till I had to be told to let it go, three times. Those units completed the handcuffing and escorted the suspect to waiting units.

Once the incident was over, I believed that everyone made out okay and all was good in cop land. However, I was wrong; I received a call from IAD in regards to this incident. It seems that our poor little suspect filed a formal complaint claiming police brutality. His argument was that excessive force was used to place him into custody and especially bringing up the knee strikes to his torso. But, believe it or not, the female deputy saved us both with her repeated calls for assistance. Our communications with dispatch recorded the suspect actively fighting, yelling and cursing. Needless to say, the complaint was not sustained and the suspect got his justice.
— PS, LA 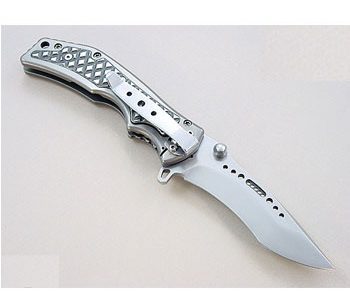