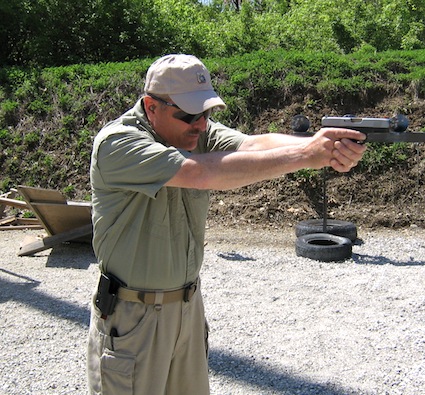 Regular Harris Publications contributor Dave Spaulding has recently announced that he is opening his own training company, Handgun Combatives. Spaulding has stated that he will focus on the combative application of the handgun, offering classes from fundamentals skills up to extreme close-quarter CQB courses. Dave is the author of the best-selling books Handgun Combatives and Defensive Living (with Ed Lovette).

Spaulding has 36 years of law enforcement and federal security experience. A founding member of his agency’s SWAT team in 1980, he served as its training officer for 12 years. He spent five years as a full-time use-of-force instructor and another five as the commander of a multi-jurisdictional drug task force, working major narcotics cases from Seattle to Miami. During his years in SWAT and the drug task force, he performed hundreds of high-risk, forced entries pursuing armed and dangerous suspects. After working in all aspects of law enforcement—including corrections, communications, patrol, homicide detective, burglary investigations, evidence collection, and a long-term, high-risk, deep-undercover operation—Dave honorably retired at the rank of lieutenant. In 2010, he was awarded the prestigious “Law Officer Trainer of the Year Award” by the International Law Enforcement Education and Training Association (ILEETA), the world’s largest law enforcement training organization.

Dave is also the author of over 1,000 articles for various periodicals, including Combat Handguns, Guns & Weapons for Law Enforcement, Special Weapons for Military & Police, Tactical Weapons, Custom Combat Handguns and numerous annual publications. He is a past president of the Ohio Tactical Officers Association and was an adjunct instructor for the Heckler & Koch International Training Division.

He is currently forming a 2012 training schedule. For more information on how to host or attend a course, log on to handguncombatives.com. He has also started a blog called “The Combative Mind” on the same site, as well as at davespaulding.com.

Holder Suggests ‘Fast and Furious’ Guns Will Be Used in Crimes For ‘Years To Come.’