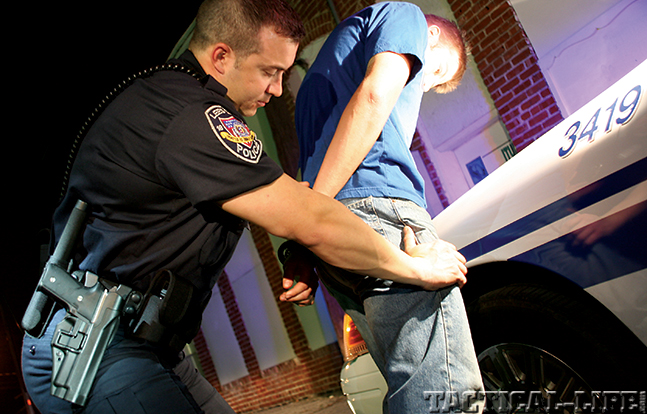 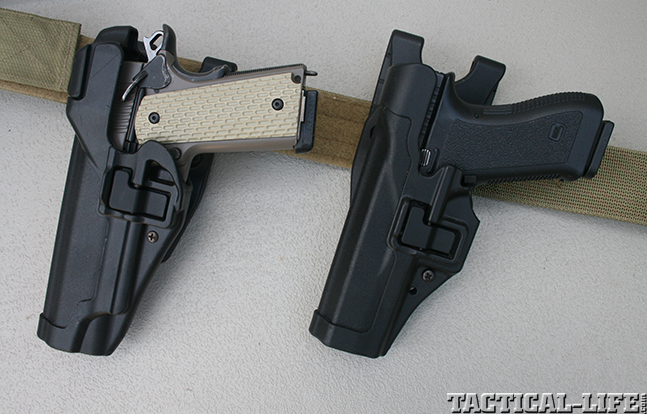 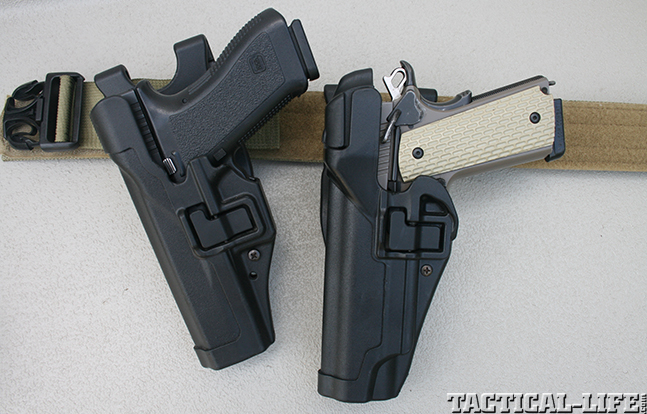 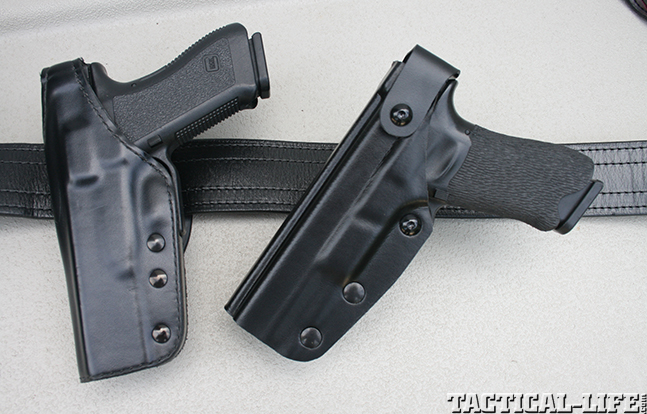 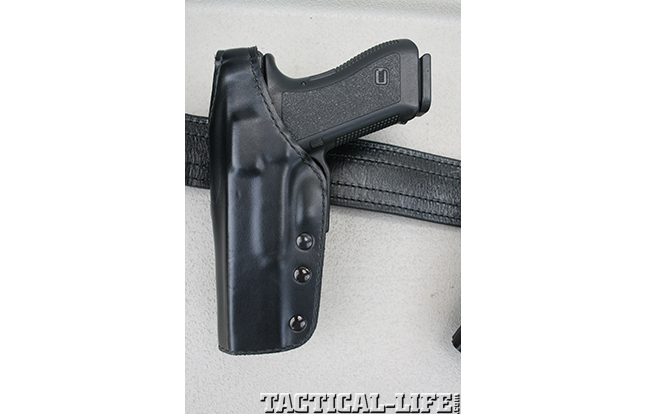 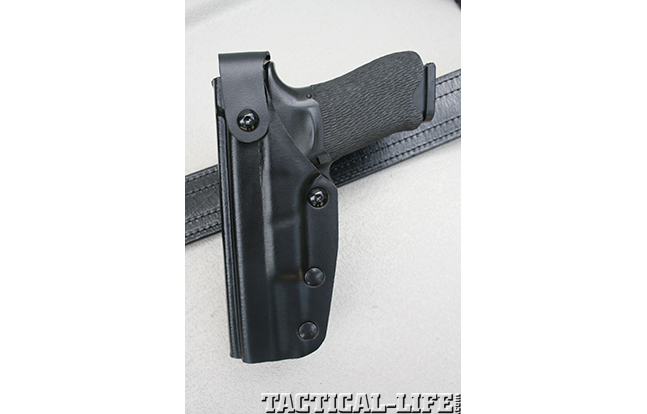 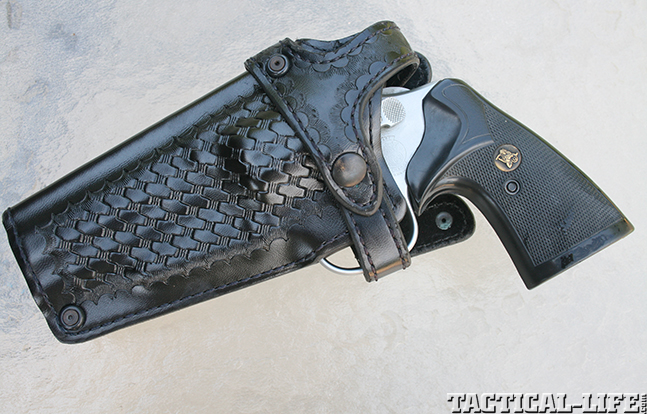 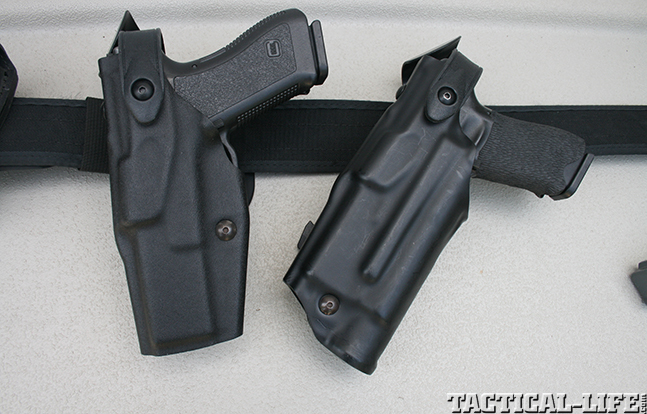 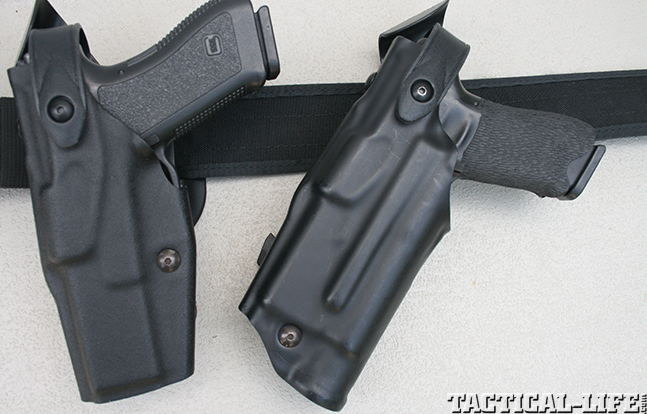 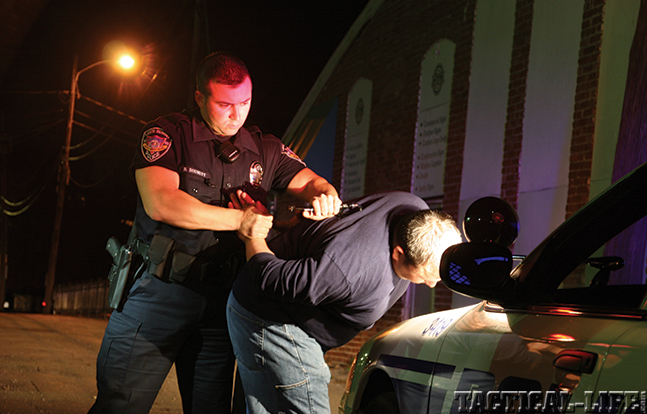 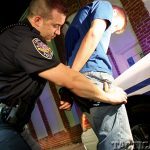 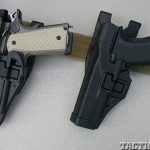 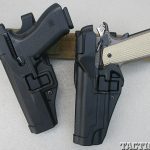 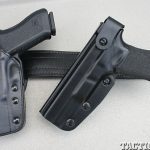 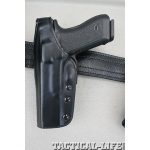 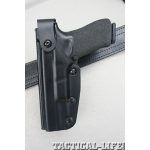 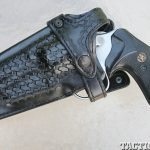 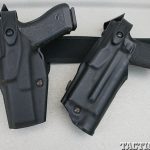 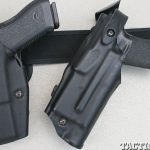 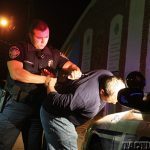 It has been estimated that the number of officers that are disarmed, assaulted or compromised in some way by being disarmed is about three times as high as the number of officers killed in the line of duty. An inescapable truth is that law enforcement is an intimate, hands-on business, and officers regularly have to get inside personal space to control a subject. In close proximity, the opportunity exists for a subject to attempt a disarm.

Retention-type duty holsters have become the overwhelming choice for uniformed patrol officers. In the late 1960s, ‘security’ models began to appear on the scene to help officers maintain control of their holstered sidearms in the event of a disarm attempt. Retention holsters incorporate one or more layers of security that must be disengaged before the user can draw the handgun. In 1975, the Rogers Holster Company developed the first security rating system. A Level I holster has a primary retention device that must be able to defeat a ‘grab and snatch’ attempt for five seconds, yet allows the user to draw after the attack ceases. A Level II holster has a second barrier that retains the handgun if the primary retention device is disabled. Three barriers must be overcome to draw from a Level III holster.

Some folks have opined that retention holsters slow down an officer’s response so dramatically that it is extremely difficult to respond to a spontaneous threat.

I have used retention holsters for over 30 years and take a somewhat different view. Draw times may be a tad slower with a simple thumb-break design, but with practice, one can still execute a pretty snappy, fumble-free draw. Many years ago, I carried a Safariland SSIII, the state-of-the-art retention holster of its day. The drawstroke was indeed unique, but 10 practice presentations with an unloaded gun before going on duty each day helped grease the wheels. In reality, the Safariland 070 was only a tenth of a second slower than my thumb-break holster, but I considered this a fair tradeoff for greater security in the event I had to go hands-on with a bad guy. Let’s take a quick look at some popular retention designs and see what they have to offer. More than likely, one of those models will suit your needs.

About 10 years ago, BlackHawk introduced the revolutionary SERPA holster to the market. The SERPA line has evolved to include concealment, tactical and duty models. Duty models are available in both Level II and Level III configurations for most popular autopistols.

SERPA holsters are crafted from a durable polymer carbon-fiber blend that holds up to adverse conditions and hard knocks. The Level II SERPA features an index finger release on the outboard side of the holster that is naturally accessed on the drawstroke. One simply depresses the SERPA release while keeping the trigger finger clear of the trigger until ready to fire.

From Gould & Goodrich’s extensive line I received a pair of the company’s more popular holsters for consideration. First up is the K340 Double Retention holster. At first glance, the K340 looks very much like a traditional thumb-break design. However, releasing the thumb break alone will not allow one to remove the pistol from the holster. In order to draw, the user executes a slight twist to the inside, which clears a triggerguard lock. Hitting the thumb break and giving the pistol a twist are quickly accomplished in one motion. I especially liked the fact that I could draw the pistol with my support hand in the event of an injury.

The K391 Triple Retention is yet another option. A rotating hood secures the pistol in the holster and acts as a barrier against unauthorized removal. To release the pistol for the draw, the shooter depresses an inboard lever with the shooting-hand thumb. A spring-loaded hood rotates down, and the pistol can be quickly lifted out and brought to bear on a target. Upon return, the gun is instantly locked, even if the user does not have the time to return the hood back to the up position.

Both the K340 and K391 are examples of Gould & Goodrich’s K-Force line. K-Force holsters look like traditional leather, but instead are rendered from durable synthetic materials.

For a holster that could be subjected to some serious tugging and ripping, a K-Force model is a better option than leather.

Safariland pretty much wrote the book on retention holsters, and its product line continues to evolve. The Rogers-designed 295 and 070 SSIII are still offered, but they begin to look a little dated when compared to newer Safariland holsters.

Back in the 1990s, Safariland introduced the Model 6280 with the innovative SLS (Self Locking System) hood. If one had to quickly reholster, sweeping the hood to the up position locked the pistol in the holster. This was a far easier task to accomplish than trying to secure a thumb break when you might be fending off an attack or accessing a less-lethal weapon. In 2006 the company introduced a new internal retention design, the ALS, or Automatic Locking System, which features an added measure of security and locks the gun on return, even if the hood is in the down position.

My agency has used the Model 6360 Level III ALS holster since 2006. When drawing from the 6360, the thumb of the shooting hand initially hits a shelf that, when depressed, rotates the hood to the down position. In a continuous motion, the thumb will now contact a small lever. Bringing the lever to the rear while obtaining a shooting grip frees up the gun for the drawstroke. It sounds pretty complicated, but with practice, draw times can be very fast. If even greater security is required, the optional Safariland Sentry lock will up the ante to Level IV protection.

Of late, I have been working with a Safariland 6395. This Level I holster is equipped with the ALS but not the SLS hood. For those who feel Level III ALS designs are a bit too involved, the 6395 is a viable alternative. Users can upgrade the 6395 to Level II by adding the optional ALS Guard. The Safari-land Hood Guard is standard and helps protect the thumb-release from a frontal attack. The gun automatically locks upon return.

Just as there is no best pistol for duty use, there is no do-it-all holster. If you are making a decision for personal use, coming to the correct decision won’t be that difficult. Choosing a holster for a large group of people, many of whom are indifferent to training, is a more involved process. What are the most common types of threats facing your officers? Quite frankly, a disarm attempt can happen to anyone, regardless of your agency’s size or mission. Realistically speaking, what kind of training opportunities will be afforded to the troops? Will they practice on their own? How difficult is it to draw with the weak hand in an emergency should the officer sustain an injury?

Like many things in life, the holster you wear is a compromise of speed versus security. Choose carefully. 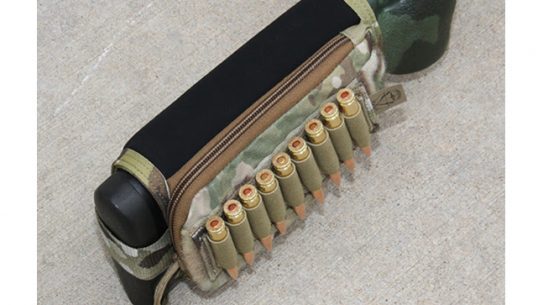