0
SHARES
15
VIEWS
Share on FacebookShare on Twitter
2012 marks the 119th year of the International Association of Chiefs of Police (IACP) and this year’s annual conference (Sept. 29 – Oct. 3) was held at the San Diego Convention Center. The opening ceremonies of the conference on Saturday saw presentations by Janet Napolitano, Secretary of the Department of Homeland Security, IACP President Walter McNeil and San Diego Police Chief William Lansdowne. Following is a round up of some of the best and most interesting products found at the show. – Dennis Adler and William Bell 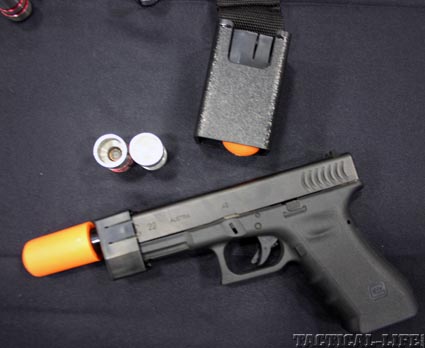 “The Alternative” instantly converts the LE firearm into a less-lethal system that incapacitates using blunt force trauma. The device is carried on the duty belt and is slipped onto the muzzle of the handgun. When the weapon is fired the bullet travels through the docking mechanism into the cavity of The Alternative where it imbeds adding its mass and forward momentum to the projectile.

This separates the projectile from the docking mechanism and it moves along the intended path of the bullet. A large, blunt rubber sleeve on the projectile lessens velocity and penetrating energy resulting in less injury to the assailant’s body. The docking mechanism immediately separates from the weapon after firing allowing an instant return to lethal action. 619-326-4411, Alternativeballistics.com. 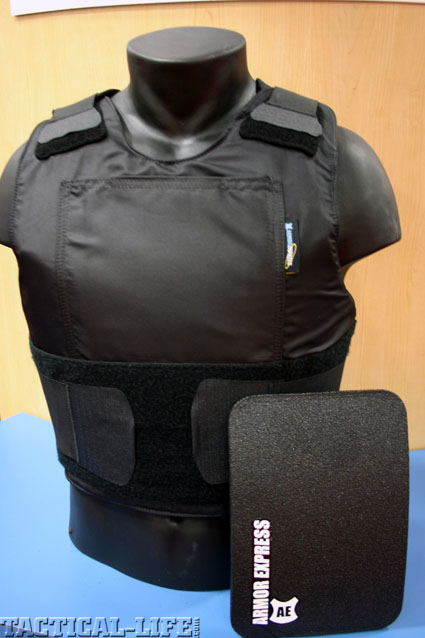 Armor Express, the successor to Second Chance (the originator of soft body armor), has a new ARA-Shock ICW “shock plate” that can instantly upgrade a Level II or IIA ballistic vest up to Level IIIA ballistic protection. An Aramid semi-rigid armor plate with a rubberized coating, it has a thickness of just 0.18”and comes in 3 sizes; 5”x8”, 7”x10” and 10”x12”; weighing from 0.26 lbs. to 0.78 Lbs. Made to slide into the front pocket of a ballistic vest, this flexible plate offers increased protection for vital organs in the upper chest. 866-357-3845, Armorexpress.com. 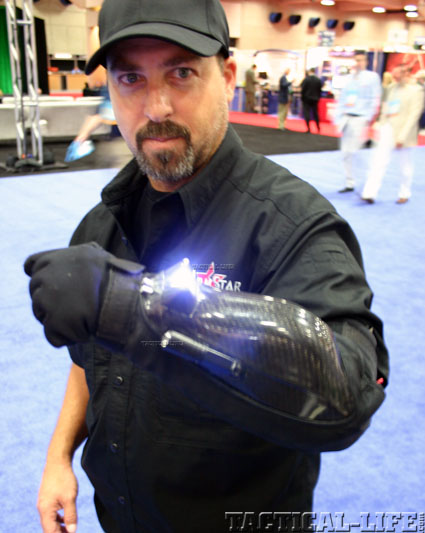 Think “Robo-Cop.” The ArmStar BodyGuard 9XI is the first less-lethal system that attaches to the arm of the user making it virtually impossible to lose in a struggle. It is primarily an electric stun device, but it has a number of additional features designed to deter a potential assailant. 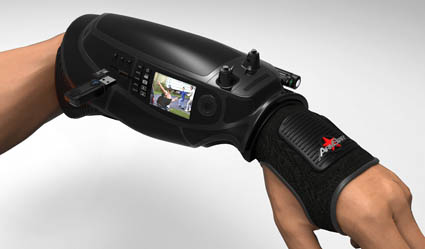 First is the load crack and flash of the stun devices electrical arc; added to this are options like a LED flashlight, green laser, HD video/audio camera, and OC spray. It has a docking station for a smartphone allowing use of GPS, wireless streaming and other technologies. It also leaves both hands to be free in the event more forceful measures are needed. 714-639-1005, Armstar.net. 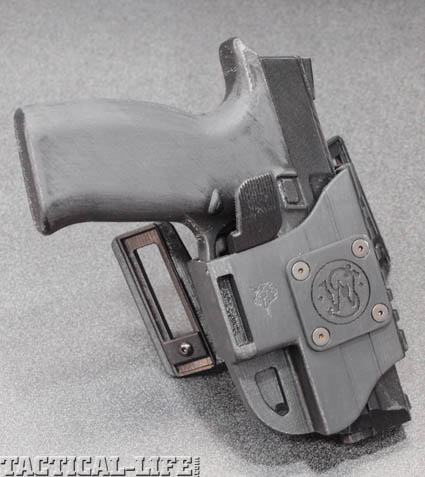 Designed for Glock, S&W M&P, and the Sig P229 (other models to come) this all-new DeSantis glass reinforced injection-molded duty holster has up to five levels of retention. Its modular design allows one holster to serve as a Level 5 retention duty belt rig, and with a quick change locking clip, replace the belt module with a paddle mount, high ride belt mount, or molle mount for attachment to a tactical vest. By removing the upper section of the holster, which houses the thumb release cover, the same rig can be converted to a Level 4 with an integral Picatinny accessory rail on top to store a tactical light or light laser. The dual trigger finger/thumb releases are also individually removable to make the holster a Level 2 open top design for CCW use. 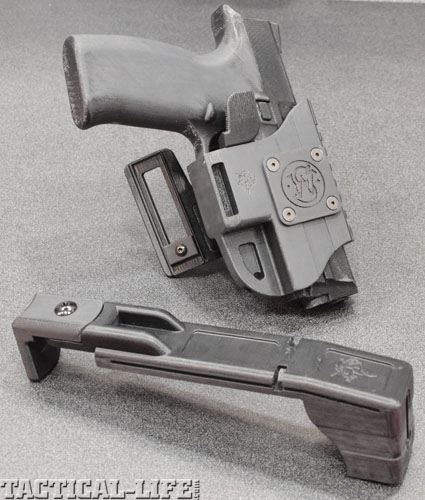 The five optional retention levels are comprised of the molded holster’s trigger guard detent tensioning device (internal passive safety retention Level 1), the manually activated thumb release cover, which can be pushed to either side, and the combined thumb and trigger finger releases, which must be depressed (squeezed) simultaneously in order to draw the firearm. The sample pictured is a prototype and availability and price will be announced soon. Desantisholster.com; 1-800-424-1236. 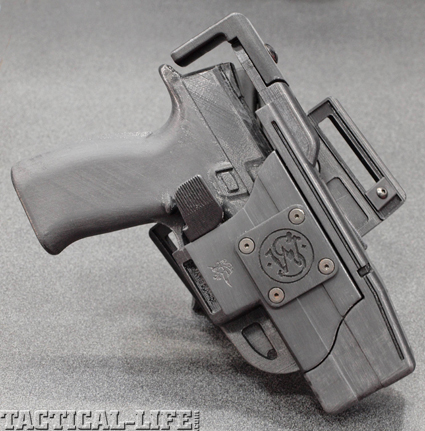 The sample pictured is a prototype and availability and price will be announced soon. (800) 424-1236, Desantisholster.com. 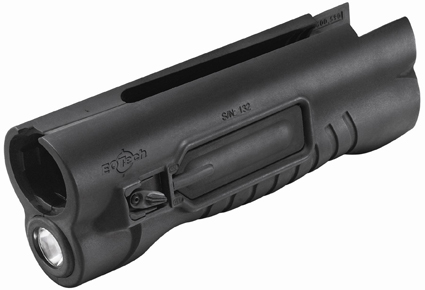 The EOTech IFL (Integrated Fore-End Light) is the same system used on the new Mossberg line of shotguns but the IFL is designed to retrofit on older Mossberg 500 models including the popular Mossberg Cruiser. The IFL puts 21st century technology at hand by replacing the fore-end on both older Mossberg 500 and 590 and Remington 870 pump shotguns. 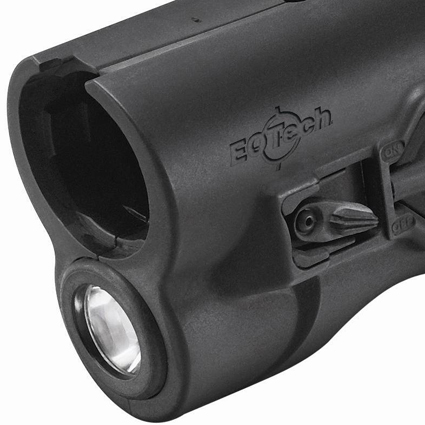 The EOTech Fore-End offers ambidextrous controls with a main on-off switch and multi-function touch pads with momentary illumination of 120 lumens, constant on by double tapping the activation pad, and strobe, by double tapping the pad a second time. Powered by one lithium CR123 battery the IFL has a minimum runtime of 120 minutes. Suggested retail is from $269. (734) 741-8868, Eotech-inc.com. 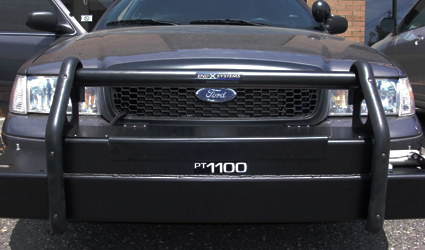 In recent years a number of LEO’s have lost their lives or been badly injured when setting out “stop-sticks” during a high-speed vehicle pursuit. Now from End-X Systems comes the PT 1100 system that allows the officer to safely deploy stop sticks from inside the patrol vehicle. Contained within a specialized push-bar, the PT 1100 unit can be easily fitted to the front bumper without vehicle modifications. 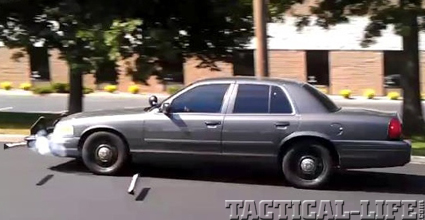 It carries three stop sticks that are launched in sequence, at three different distances, using CO² power. The system can be used while the vehicle is stopped or moving, allowing officers the option of deploying stop sticks earlier in the pursuit, decreasing agency liability. 480-296-6447, EndXSystems.com. 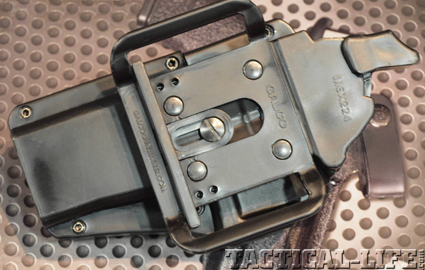 Based on the popular Galco M4X paddle holster, the M6X is a modified version with a full size, adjustable belt mount for carry on a traditional Sam Browne duty belt. The injection-molded polymer construction holster has a self-retention Level 1 security thumb release. The M6X is a trim, ergonomic design with an easily operated thumb lock instinctively actuated when drawing the weapon. 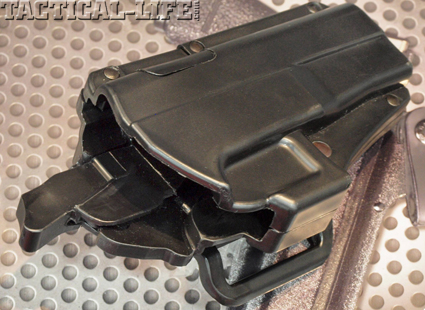 The new model was added to the Galco line this year in response to requests from law enforcement for a duty rig version of the paddle holster. The M6X is available to accommodate most Glock models, Sigs, Colt Model 1911s, and 1911-style semi-autos. The retail price is $39.95. (800) 874-2526, usgalco.com. 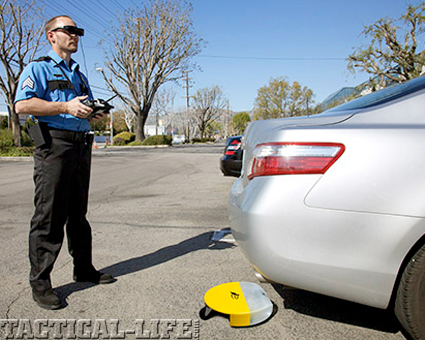 With a stand-off range of up to 300 meters, the General Robotics Ferret is perfect for checking the underside of vehicles for bombs or can be used at the border for the interdiction of hidden narcotics or other contraband. Operated by remote “stick” control, it has a high-resolution, zoom and tilt-capable color video camera paired with integral LED soft light for sharp color pictures using a Sony 1/3” G5 imager. The Ferret operates on most paved surfaces using a direct precision planetary drive system with a 180 minute run time. The 14” diameter unit is 4” tall, weighs 8.8 lbs., has 1” ground clearance, and fits under low-slung vehicles with ease. (855) 762-6848, Generalrobotics.us. 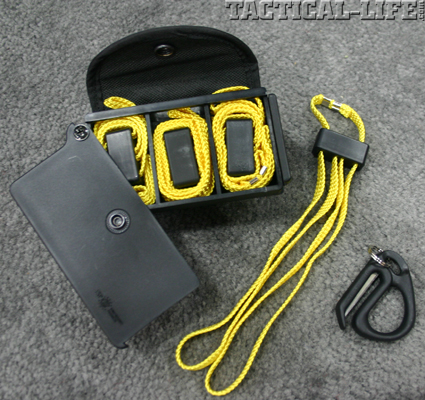 Often during crowd control operations at special events multiple arrests are common and call for multiple restraining devices. Triple K fulfills that need with their new Textile Handcuffs. They come in black or yellow and have a locking system that prevents release by the strongest person, yet they are compact and lightweight. A combination cuff/seat belt cutter is used for removal and Triple K makes a nylon/polymer pouch that carries from 3-5 pairs of the Textile Cuffs. 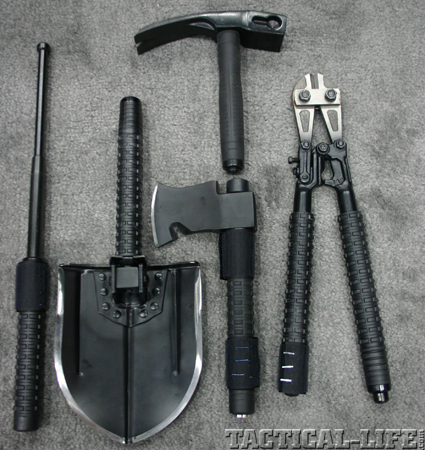 They also offer collapsible batons and for added versatility, several screw-on attachments including a shovel end, axe, pry-bar and bolt cutters, which can be useful for rescue or door and obstacle breaching. (877) 486-6247, Triplek.com. 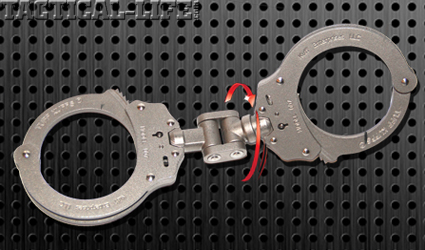 Invented by a 22-year veteran officer with the goal of saving LEO lives, the heavy-duty, stainless steel Tuff Kuffs go on the wrists of a suspect like conventional handcuffs. However, once applied, the patented one-way clutch mechanism allows the officer to turn the wrists so the hand is positioned over the opposite forearm. 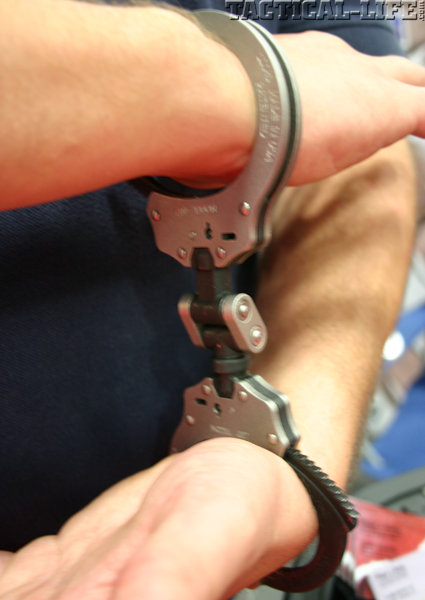 The cuffed hands are now virtually useless for fighting or attempting a gun grab. The Kuffs raise the centerline enough so that even the slimmest, most flexible subject can’t slip the cuffs down the back and around the feet to the front. (941) 882-8294, TuffKuffs.com. 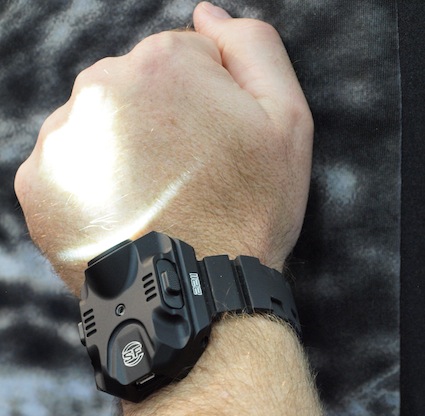 The brand-new Surefire 2211 introduces an entirely new category of tactical illumination with a 180-lumen (max), wrist-mounted tactical light that is worn like a watch. As Kevin Skehan, SureFire’s special projects consultant, explains, “With one-touch ambidextrous activation, the 2211 automatically illuminates a wide area (most handhelds are spot-driven) and is positioned in such a way that it provides a diffused light beam exactly where the pistol is being pointed.” The advantage in a deadly force situation is the ability to put overwhelming white light on a potential suspect, which may change the outcome of that encounter by allowing an officer to clearly see if the suspect is armed. Skehan explained, “The defused light beam fights tunnel vision, when everything starts closing in on us. 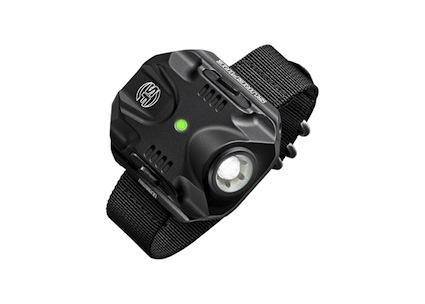 The wide light beam also helps to enhance peripheral vision to potentially recognize a threat that might not otherwise be seen in a dimly lighted or dark room. The 2211 gives officers the ability to ‘throw the lights on’ and see everything.” Though not intended to replace a duty flashlight, the 2211 is one more crucial tool that is always on an officer’s wrist and ready for activation. Made from mil-spec hardcoat anodized aluminum and powered by a rechargeable lithium-ion battery, the 2211 weighs only 3.7 ounces. Suggested retail is $499. 800-828-8809, surefire.com. 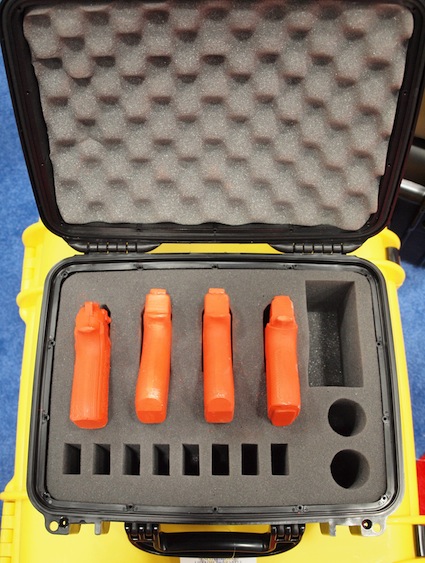 Seahorse Protective Equipment has a new four-gun case for revolvers or pistols up to 1911 sizes, officially known as the SE540FP4. The guns are stored muzzle-down for improved safety and the case is pre-cut to accommodate 12 magazines, two speedloaders and accessories or a box of ammo. 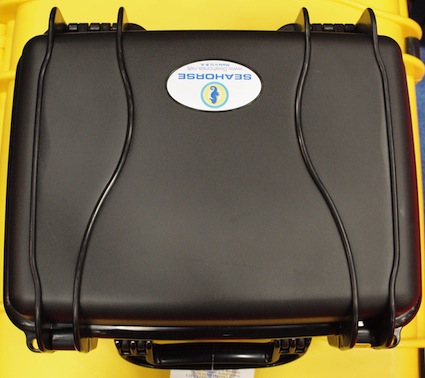 The Seahorse is crush-proof, watertight with a full O-ring seal, and has automatic purging to release air pressure by lifting the latch. The case lid is also drilled to accommodate two TSA-approved padlocks for airline transportation. Available in four colors, suggested retail is $130. 626-339-6673, seahorse.net.