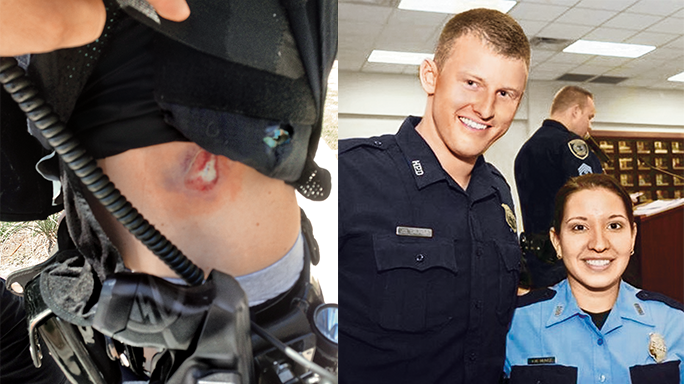 I was a patrol officer in an urban area in a southwestern state in the late 1990s when I received a radio call of an ex-boyfriend attempting to kick in the apartment door of his ex-girlfriend, who was the calling party. As another officer and I arrived at the apartment, we noticed fresh signs of damage to the door.

Standing to the side, we knocked, and a female came to the door, cracking it open only about 4 inches. She appeared quite frightened but advised that everything was okay because her ex had already left. As we continued to press her for details, it was clear she was uncomfortable and nervously trying to quickly get rid of us. Between the fresh damage on the door and the fact that my gut told me she was hiding something, I announced that we were coming inside to check the apartment and make sure that everything was in fact okay.

Her level of nervousness piqued as we entered. We began checking the rooms of the apartment, and I made my way back to the master bedroom. I could hear the woman continuing to try to reassure us that we were no longer needed from the living room. I took a knee and peered under the bed, then moved to the closet. As I slid the door to the closet open, I began to see part of a leg and a knee in blue jeans, and suddenly, having no memory of a conscious decision to draw, realized my pistol was already out of its holster and in my hand, with the muzzle pointed at the man’s face.

“Don’t f$&@ing move!” I commanded. I’d found him squatting down in the closet, directly in front of me, holding a revolver, muzzle down, next to his knee in one hand. He reacted by slowly letting the big-bore revolver slip out of his hand, thudding onto the carpet.

I called for the other officer, who came into the room where I was holding the suspect at gunpoint. We removed the gun from his reach and took him into custody without incident. He’d forced his way into the apartment and, upon our arrival, had threatened to kill the woman if she revealed he was there. He was charged with first-degree burglary, assault with a deadly weapon and felon in possession of a firearm. He had a lengthy and violent felony history.

I would later recount the incident and my automatic fast draw to new officers in field training as an example of how, under stress, we revert to learned motor skills through repetition and muscle memory.  — MB, OK

SAVED BY THE VEST

Houston, Texas, Police Officer John Calhoun was uneasy about the suspicious-person call. Calhoun and his partner, Officer Andrea Munoz, had just started their shift on the sweltering afternoon of Aug. 13, 2014. The dispatcher relayed unusually descriptive information about a man at a bus stop—everything from what he wore to the pot he was smoking and the handgun he displayed. It made Calhoun and Munoz think that the man had made a huge impression upon whomever called 911. “We both didn’t feel good about this,” Calhoun recalled.

The officers immediately saw the man when they pulled up to the scene on Airline Drive. At first they didn’t see the gun. Munoz got out and calmly spoke to the man in Spanish, saying she wanted to have a word with him. Calhoun got ready with the cuffs. This was a technique that worked well for them in their five and a half years as partners: Munoz providing the distraction and Calhoun, at 6 feet 6 inches tall, ready to apply muscle.

But the man bolted. Calhoun caught up quickly and put him in a bear hug. That’s when the officer heard a loud POW and felt a sharp thud in his side. “I felt like I had been hit in the side with an aluminum bat,” Calhoun said.

“I picked them both up, and we all went to the ground,” Calhoun said.

They struggled to control the man’s gun, but then Calhoun saw the muzzle edge toward his partner’s head. The man was pulling the trigger, but nothing happened.

Calhoun didn’t wait for the malfunction to clear. “I thought, ‘I’m not having any of that,’” he said.

The officer drew his own pistol, and then warned Munoz to brace for his shots. Calhoun fired twice. The man went limp; he died later at the hospital. Backup officers arrived, including Munoz’s husband, a tactical team member.

They helped Calhoun out of his gear, but the injured officer couldn’t see where the bullet punched him. “I said, ‘Dude, take a picture of this so I can see it,’” he recalled. The camera phone image, Calhoun said, “looked like a pretty good road rash.”

His body armor was an ABA HP02 Level II vest from Safariland. Its manufacturers were excited to hear that the officer survived the contact shot, but Calhoun didn’t understand why his case was so special, seeing as the slug was a small caliber.

But, it turns out this case was something that the manufacturers can’t simulate in lab tests. Safariland’s Ed Hinchey explained that compliance standards set by the National Institute of Justice don’t require tests for contact shots. “In Officer Calhoun’s case, the firearm was pushed so hard into his side that it was not able to cycle for the second shot,” Hinchey said. “To perform that type of testing in a lab environment would risk catastrophic failures.”

Calhoun, who now serves on the same tactical team as Munoz’s husband, said a vest is as important as a duty pistol. “Guys talk about it like it’s a ‘sweat diaper’ when it’s so hot,” he said. “But I tell everybody, it’s better to be hot than shot.” — BM, NY 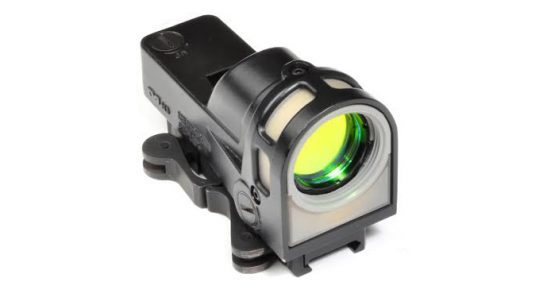 The Mepro M21 from Meprolight features a large 30mm display that allows shooters to...