by Tactical-Life
in Military & Police
0 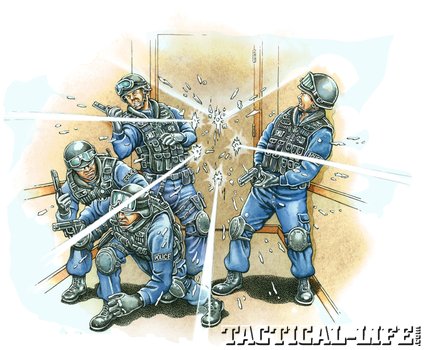 As they made their way to an apartment where they had just received a “shots fired” call, the patrol officers could plainly see bullet holes in the walls of this rundown Section 8 apartment complex. Once at the suspect’s apartment, officers found the door partially ajar with a cord that wrapped around the handle and leading underneath a rug 3 feet inside. A veteran officer who had seen combat in Vietnam recognized this as a possible booby trap and wisely decided to withdraw and request the SWAT response, which quickly brought me and my entire team straight into the line of fire.

More patrol officers arrived to establish a perimeter and begin a limited evacuation of the very large building. Once our SWAT team was on scene, we relieved patrol, took command of the inner perimeter and began our initial approach to the apartment. When we arrived at the door, the entry team leader was able to closely observe the cord and determine that, while the device resembled a booby trap, it was fake and of no threat to the team.

Crisis negotiators attempted to communicate with the resident of the apartment to little avail—his delusions made any hope of a surrender unlikely. Due to the apartment’s small size, our team leader ordered that each man would go in armed only with a 9mm Sig Sauer P226 pistol. Each was outfitted with a 20-round magazine. We would make a slow and gradual incursion into the apartment, closing the gap with the suspect until we reached our final assault-point, where we would breach the bedroom door and confront the suspect.

During our movement down a short hallway, the suspect opened fire through the closed bedroom door. Almost immediately, one of the officers further up the stack advised that he had been shot and stepped off-line. In the next several seconds, as our team began to make a crisis entry under fire, another officer was shot.

After deploying several diversionary devices, we attempted to breach the bedroom door. It could only be forced a short way due an obstruction inside. We continued the breach. Soon the door broke in half. We climbed into the room and over the wall of a bunker that the suspect had constructed inside. During the melee that ensued, another teammate was shot, this one in the chest just outside the area covered by his body armor. Due to the low-light conditions and amount of debris in the room, none of us were able to initially find or engage the hidden suspect, until one officer found and disarmed him, just as the suspect was working the bolt action of his .22 rifle.

Taken into custody and later determined to be mentally ill, the suspect was committed to a treatment facility. All three officers were treated and released from the hospital. The officer who had been struck in the chest was fortunate: the bullet had penetrated through the side of his pectoral muscle and traveled straight through, impacting nothing vital. The other officers, each wounded in an extremity, suffered relatively minor wounds and returned to duty shortly thereafter.

There were many lessons learned that day. From those, our team began a years-long growth process that included training in explosive breaching, crisis entry, combat medicine and other subjects. From near-tragedy we found success. Today our team is one of the best in the country, fully mission capable and ready for any task.
—SO, IN