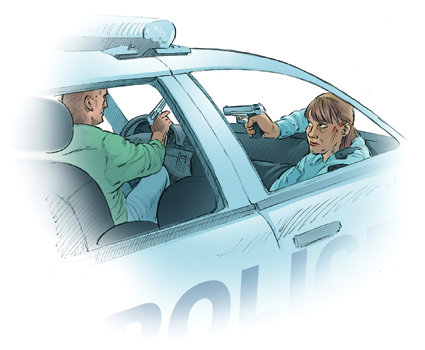 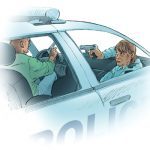 On February 2, 1998, 23-year-old Officer Katie Conway was driving her cruiser in one of Cincinnati’s toughest neighborhoods. As she began slowing for a traffic light, she watched a man carrying a boom box cross the street. He suddenly stepped in front of her and she hammered the brakes, barely missing the man.
Daniel Williams, 41 years old, had been arrested 17 times in the past. Earlier in the evening, his family had called the police to report that Daniel, who had a history of mental illness and was now off his meds, had threatened to kill his 71-year-old mother.

Officer Conway was unaware of all of this as Williams darted to her open driver’s-side window and slammed the boom box into her face. A stunned Conway could not recover before Williams pulled a .357 Magnum revolver and shot four times, all the while screaming, “I’m going to get you!”

The madman yanked open the door of the squad car, pushed the badly wounded and disoriented officer over and slid behind the wheel as he drove off wildly—destination unknown.
Officer Conway held desperately onto consciousness as she struggled to draw her 9mm Smith & Wesson semi-automatic handgun from her holster, which she was lying on top of. She managed to work the firearm free and aim as she was jostled about inside the speeding squad car. She indexed the trigger and fired two shots. Williams slumped forward, and Conway realized she was in a car with a dead man driving. Conway braced herself as the car went airborne and slammed into the wall of the Sam Adams Brewery, going from 50 to 0 miles per hour in a violent millisecond.

Without any warning, Officer Katie Conway had been brutally attacked with a boom box and a .357 Magnum, then decisively won. The injuries she sustained did not end her life as the suspect intended, but they did end her career. The pain she suffered would not be in vain, however, for she would share with fellow officers the thoughts she had on the seat of that squad car on that fateful night. Her words would be priceless in helping recruits survive the challenges that lie ahead of them and help them also prevail. As Katie floated in a sea of pain, on the seat of that squad she determined, “If someone is going to have to die tonight, it’s not going to be me!”

In the aftermath, investigators later discovered Conway had fired at the suspect twice. Initially, they concluded she had missed once since there was but one hole in the right side of the suspect’s head. Everything considered, who could fault her? However, the autopsy revealed that Conway, while lying prone next to a raging lunatic, in a careening motor vehicle, wounded in eight places, had fired twice but had not missed at all. Both bullets had entered the suspect through the same hole.
—DM, WI

On Friday, September, 23, 2011, at approximately 1:40pm, officers from my department responded to a call in which a man was seen entering the empty home of his estranged wife. He was wearing camo and carrying multiple weapons. The man was apparently distraught after a custody hearing that same morning.

When officers arrived to serve the man a domestic-violence injunction, he met them in the yard with a high-powered rifle and fired several rounds. Three officers were shot. The officers were airlifted to a trauma center and later recovered from their wounds, but this event was the beginning of a seven-hour standoff that involved a man armed with rifles, CS gas and a grenade.

Multiple units and SWAT teams from surrounding counties and departments responded. Armored vehicles were brought in to block the streets and provide cover and protection for the officers. One vehicle, however, was a little different from the others: the Rook, a newly acquired Armored Critical Incident Vehicle that had just recently been put into service by the county’s SWAT team prior to this situation. It was designed to essentially pick up where other armored vehicles stopped. The Rook was also instrumental in ending the standoff quickly and safely.

With the standoff going into five hours, the Rook arrived on scene and was deployed. An hour later, it was over. The Rook immediately took out the front doors of the home with the ram. The suspect deployed a canister of CS gas, which made visibility inside diffi-cult. Officers continued to probe the windows around the house using the Rook’s hydraulic ram, which has built-in LED lights and cameras. The operator was able to clear 90 percent of the rooms from the cover of the Rook.

The ram was lifted and pushed through the gable end of the roof to clear the attic. After hearing a single gunshot, the whole outside wall on one of the rooms was removed with the Rook so operators could see inside. The Rook then went to a small bathroom window and extended the ram inside. The windowsill was ripped down to the floor, and the ram became partially dislodged from its mount. Officers dropped it outside the window, and mounted the grappling claw to the Rook to finish tearing out the bathroom wall.

It was then that the suspect’s body was seen lying on the floor, covered in debris, with an apparent self-inflicted gunshot wound to the head. He was confirmed dead, but a grenade could be seen attached to his military-style vest. Using the grappling claw, the body was picked up and carried out to the middle of the street that had been blocked off. Debris was safely removed from around the body with the grappling claw, and a member of the EOD team rendered the grenade safe. It was later discovered the man had positioned an SKS-style rifle with a drum magazine on a bipod in the hallway and pointing at the door, waiting for an ambush. — JR, FL

Editors’ Note: The Rook is an armored, tracked vehicle made by Ring Power Tactical Solutions. For more, visit ringpower.com/division-landing/tactical-home. 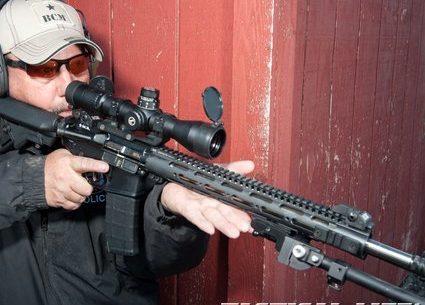