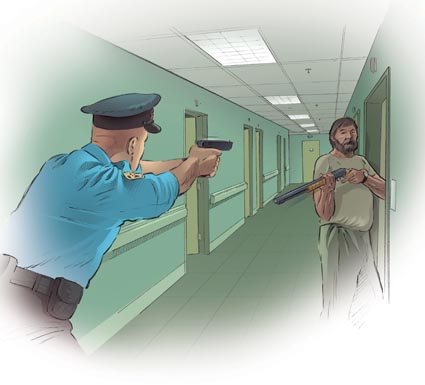 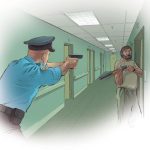 Robert Kenneth Stewart entered the Pine Lake Rehabilitation Center on March 29, 2009, intent on ending or ruining the life of his ex-wife, a care provider at the facility. He coldly stalked helpless victims in this retirement home, firing his shotgun and killing eight residents.

Officer Justin Garner was the lone officer on duty in Carthage, North Carolina, a town of nearly 2,000, on that quiet Sunday morning. He sat in a nearby parking lot watching the traffic lazily roll by him as a church service let out. At 10:00am, Garner’s radio crackled, “Shots fired at 801 Pinehurst!”

He initially thought it might be hunters in the wood line near the rehabilitation center. But this call would not be routine. A female caregiver bust out of the door of the facility proclaiming,
“He’s killing people!”

Officer Garner prepared himself for this moment with years of firearms training and by attending an “active shooter” presentation. He had decided that if it was ever to be his responsibility to respond to such a call he would remain calm and act decisively. With that deliberate calmness, he entered and moved through the facility. He felt engulfed in the eerie silence as he passed elderly victims. The only sound heard was the shuffling of the slipper-covered feet of residents heading somewhere, anywhere, to avoid the shotgun-toting monster.

Garner would later say, “I knew that someone was shooting them and could not figure out why anyone would shoot them. They were like children…defenseless. I thought I had to find this guy.”

He moved stealthily to the center of the facility, which had the layout of a hub with spokes coming from the middle. While pausing to listen at an abandoned nurse’s station, the silence was broken by two shotgun blasts from a room down the hallway Garner was standing in.

Stewart exited the room, reloading his shotgun. Justin brought his .40-caliber Glock 22 to bear on the killer. Officer Garner shouted, “Drop the weapon!” three times, showing the killer a mercy Stewart was incapable of understanding.

Stewart turned slowly about and swung the muzzle of his shotgun toward Officer Garner, who did not hear any shots but knew he fired first. An instant later, Stewart fired.

Garner felt a sharp sting in his ankle and foot and for a moment thought, quite incidentally, “It should hurt more to be shot.” He then slid instinctively behind cover and leaned out, prepared to meet an anticipated advance of the suspect. Instead, Officer Garner discovered that his one incapacitating shot had ended the gunfight.

Garner, wounded but still mobile, cautiously approached the shooter and handcuffed him. A search revealed the suspect had a pistol in a holster slipped into his belt in the small of his back. The outcome was announced as Justin’s voice broke calmly over the radio, “Shots fired. Suspect down.” 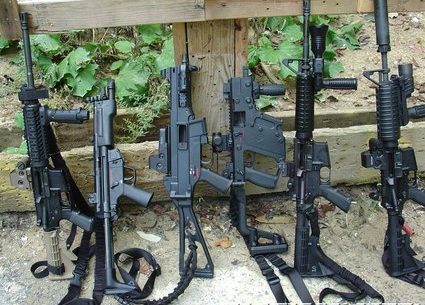