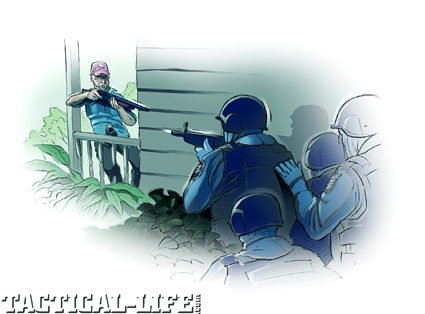 ARMED AND UNMEDICATED
My department’s SWAT team is based in a small southern town with lots of locals that live out in the woods and a few that we know that are a little “off.” On this particular day, my team got activated to respond to a domestic situation with a barricaded suspect who has mental health issues.

According to the officers on scene, the suspect wouldn’t leave the house, wouldn’t let other individuals (his family) inside the house leave and was brandishing a shotgun to the arriving officers.

The officers had secured a perimeter, contained the suspect and were in “hostage negotiation” mode. The unfortunate thing about barricades and hostage-type scenarios is if the suspect is mentally ill, you have no idea what they will or could do. So the scenario is very dangerous and not necessarily in the hostage negotiation playbook, especially for a small town.

As we were spooling up to respond, we got word that the suspect had fired a round or two into the air but not at the officers. We received word that the suspect was on his front porch and came up with a plan to be dropped off down the road from the target house, maneuver into the tree line and try to get to the side of the house opposite the one the suspect seemed to be favoring. Our thinking was that if we could flank the suspect from the side or be in the “ambush” position from the rear, we could use “less than lethal” tactics to subdue him and take him into custody.

Once we got into position on the far side of the house, we waited for an opportunity. We watched the suspect pace the porch, but he seemed to favor staying to the other side. The suspect walked with his shotgun at the ready. As he reached the corner, the suspect saw the team and yelled, “You SOBs, get off my property!” and pointed the shotgun at the officer on point. The point officer, faced with the imminent and deadly threat, engaged the suspect with his MP5. The suspect dropped on the porch and did not make it to the hospital.

Thankfully, all the officers were safe and no one inside was hurt. Later on, family members that were held hostage told us it was only a matter of time before he hurt someone as he was off his medicine and was prone to violence. — DL, TN 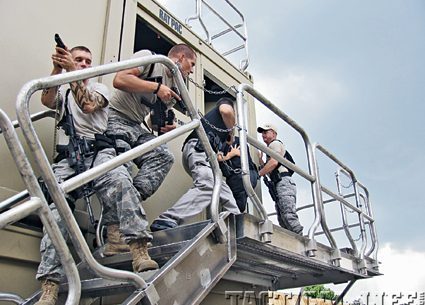