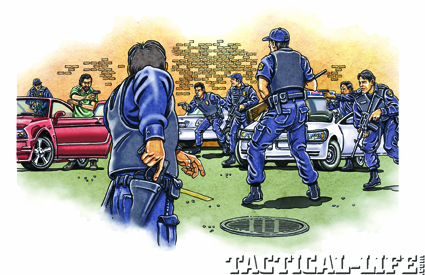 It was a slow Sunday night in November, 2008. My shift was winding down and everyone was trying to catch up on our reports when dispatch gave out a “be on the lookout.” We were looking for a red Dodge pickup truck with Mississippi plates. The truck belonged to a murder victim, and the driver was wanted for the murder. The suspect had called an ex-girlfriend and was headed to meet her in a county next to us. He was also armed with a 9mm pistol, the murder weapon.

Once set up on the highway leading from our county to the next, another deputy and I waited. We hadn’t been waiting long when dispatch called us to advise that a city police unit was out with the suspect and was requesting assistance. We both pulled into the convenience store parking lot where he was and positioned ourselves on either side of the police K-9 unit, noting that there were no blue lights on.

I could see the city officer walking around his car. Moving from front to back and side to side, not focused on the suspect vehicle. His weapon was holstered and his K-9 was still in the car. As I got out of my car, I had my patrol rifle ready, and I focused on the red Dodge truck parked in front of the store (unable to see in the cab due to its dark window tint), then on six or seven people moving around inside the store. The city officer still had not drawn his pistol.

Unsure of what was going on, I placed my rifle back inside my patrol car. I then asked the officer if the suspect was still inside the truck. He said yes. I looked at the vehicle again and could see the Mississippi plate matched the note on my dash where I had written it down. I called out to my partner, “That’s the vehicle,” then drew my sidearm.

I then saw the suspect looking at me in his side mirror. I called out to him and told him to turn off the motor, and he did so. I then went through felony stop procedures: getting the suspect out of the vehicle, hands-up, backing up towards my car. I coordinated with my partner and had him put the suspect in handcuffs and place him in a patrol car. Once he was secured, my partner covered while I approached and cleared the truck. There was no one else inside.

The suspect was extradited and later plead guilty to murder. In speaking to the city officer after the stop, we learned that he had not initiated a stop. The suspect just pulled into the store parking lot and the officer followed him in, stopping by the pump islands. As to why he did not draw his weapon, or deploy his K-9, he did not think it was justified until dispatch confirmed the vehicle plate matched that of the wanted vehicle.

I learned a few lessons on this night. 1) Do not relax. I had a weak/confused moment when I first got out due to the city officer not being alert or ready for action. I recovered quickly, though I resorted to an inferior weapon. 2) Be alert for avenues of escape. I was aware that the suspect might already be in or headed for the store for hostages. I was determined not to let that happen. 3) Coordinate/practice. We train at least once or twice a year, formally, on felony stop procedures. In addition, I am a Field Training Officer for my shift and frequently use the shift officers when training rookies several times a year. This made our stop flow smoothly once contact was made. —BM, GA 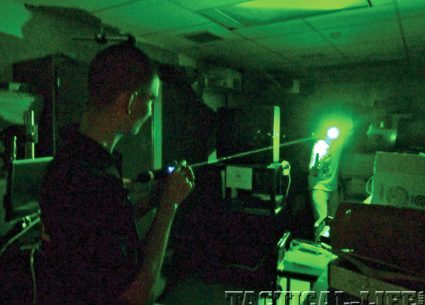 Jim Brown illustration It was a slow Sunday night in November, 2008. My shift…