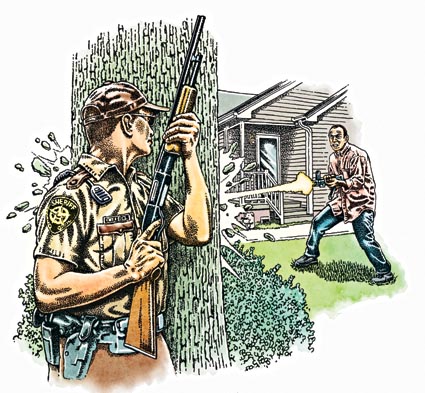 On September 8, 2007, Deputy Carl Beier was nearing the end of his shift. Deputy Beier heard a call come over the radio for a violent domestic disturbance at a rural residence in Jefferson County, Missouri, and decided to respond. As he approached the residence, he saw a woman running toward his cruiser. The woman told him that her husband had a gun and an arsenal inside. As she shouted this, she ran past the deputy, away from the house.

“When they run by you and keep going, it’s a good indication of a bad situation.” Beier said. He attempted to put the patrol car in reverse and began backing out of the driveway, but he was unable to exit the area quickly and safely. He was trapped.

Beier looked at the house and saw a male walk to the front porch, emerging with a rifle. Beier reported to dispatch what was going on and requested backup. He then exited the car, hitting the button that opens the trunk where his Mossberg 500 12-gauge shotgun was stored. “We train our officers to get out of the car, pop the trunk and get to the rear of the car. Having the shotgun back there was the equivalent of having a Plan B. I think those actions saved
my life…getting out of the car should be a top priority for anyone in a similar situation,” Beier later said.

Once he retrieved his shotgun, he found cover behind a large oak tree, where he was able to keep an eye on the front of the house and hunker down. As Beier scanned the area, he lost sight of the suspect in thick foliage. Then the suspect started heading for Deputy Beier’s location—and firing. The weapon used was later identified as an AK-47 modified to fire on full-auto. Beier maintained his composure and radioed his updated situation. “All of my thoughts were clear and I ran through at least three different plans in my head—I was going to survive and win.”
As the suspect fired the AK-47 and moved closer to Beier’s location, the deputy kept peeking out of different areas of the tree so he could keep an eye on the suspect’s approach. Beier would reemerge at a different spot each time. “Every time I peeked out, the suspect would concentrate his fire at the spot—he was very accurate and I could feel chunks of the tree ripping off.”

As the suspect closed in, he sprayed Beier’s cruiser with several rounds. Then he turned his gun back onto the tree where Beier was positioned. While the suspect was still near the patrol car, Beier saw an opportunity—a 2.5-inch wide sight picture of the suspect’s head. Deputy Beier lined up the sights on the shotgun and fired. The investigation would reveal three 00 buckshot rounds hit the suspect’s head.

Beier watched as the suspect dropped behind the patrol car, down but still alive. The investigation revealed that the suspect fired 29 times at Deputy Beier. Neighbors also stated the subject “regularly practiced firing his weapons, so he was a good shot.” The suspect made a full recovery and is in prison serving a life sentence plus 86 years.
Deputy Beier’s perseverance saved his life, the victim’s life and potentially the lives of responding officers. Beier, now a detective, was awarded the Public Safety Officer’s Medal of Valor by Vice President Biden for his actions as well as the Missouri Medal of Valor and his department’s Medal of Valor. —DM, PA 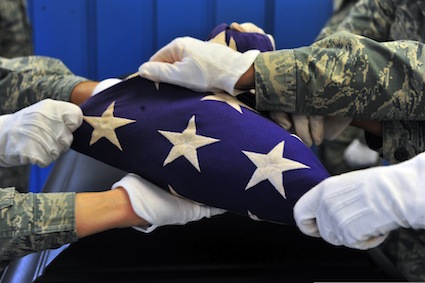