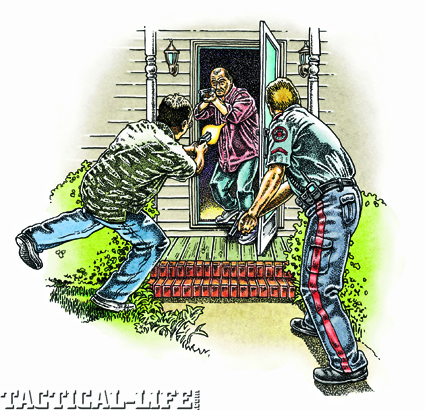 Psycho With a Shotgun

Cecil County, Maryland, located in the northeast corner of the state, has many rural areas where there are only one or two sheriff’s deputies on duty for some shifts. This was the case on January 6, 2011, just after lunchtime, when Sheriff’s Deputy Michael Zack, off-duty and driving his marked take-home cruiser, noticed a fellow deputy’s lights distantly in his rearview mirror chasing a fleeing traffic violator. Not unusual, but the call on the radio was that this violator had already rammed the pursuing deputy’s vehicle once and was known to be violent and unstable.

Fully aware that backup was distant at best, Deputy Zack immediately jumped in to render assistance despite being in plainclothes with no body armor. He spun his patrol car into a turn to cut off the suspect’s escape, but instead of slowing, the suspect accelerated with the intent of ramming Zack head-on. Deputy Zack managed to move his vehicle out of the way just in time and then joined the pursuit, taking charge of the communications.

During the 11-mile high-speed pursuit, the suspect weaved dangerously in and out of traffic and appeared to be headed in the direction of his residence. Seeking to avoid endangering other motorists or pedestrians, the two deputies backed off the pursuit, hoping the suspect would slow down. Zack and his fellow on-duty deputy decided to head toward the suspect’s home in the hopes of apprehending him there, outside his vehicle.

When the two deputies arrived, still without backup, the suspect’s vehicle was present and the front door was open. As the uniformed deputy, pistol drawn, approached the residence to perform a visual inspection through the open door, the suspect emerged with a sawed-off shotgun. The deputy ordered him to drop the weapon, but the suspect refused.

Hearing his fellow officer’s command, Deputy Zack rushed forward—drawing the gunman’s attention toward himself and away from the other deputy. At that point, the gunman turned towards Zack and took aim with the shotgun at Zack’s head from close range. Having no choice and with only seconds to react, Zack engaged the suspect with his duty Glock 23 in .40, firing five shots. The other deputy also fired at the suspect, who was felled by the barrage.

It was only after the smoke cleared that backup officers arrived on scene. If not for Zack’s selfless actions, bravery and dedication to duty, the situation could have ended very badly for his fellow deputy. For his actions, Zack received the NRA’s highest honor for law enforcement officers, becoming the 2011 NRA Law Enforcement Officer of the Year.

This award, established in 1993, recognizes the exceptional acts of law enforcement officers who are also NRA members. Anyone may nominate any public or private law enforcement officer or military police on the basis of exemplary acts of valor, public service or support of our constitutional heritage. Recipients are presented with an award at NRA Headquarters in Virginia, as well as a $1,500 award, an engraved Smith & Wesson M&P pistol, a custom-made ballistic vest from Velocity Systems and a trip to Albuquerque for the National Police Shooting Championships.

On a hot July evening in 2011, at about 9:00pm, I was dispatched to an incomplete 911 call. One of our canine units offered to cover me. He was about the same distance from the call as I was. As I got close to the call, I pulled to the side of the road around the corner from the call location. That placed me a little more than two houses away. I blacked my lights out and waited; a male was yelling. It was fairly dark and there were no streetlights near the house, but there was a front porch light. In that dim light, I thought I saw some movement, so I decided to approach to see what was going on. I figured my cover had to be pretty close by now.

I put the car in drive and saw a male walking from the corner of the garage down the short driveway, away from me on the sidewalk. It was poor lighting, but he appeared to be carrying a rifle with a wooden stock.

As soon as I saw that rifle, I hit the lock on my rifle rack, pulled my personal 14.7-inch LWRC M6A1S from the rack, charged it and put the forend in my left hand. Since he was walking toward a parked car, I decided I would wait to see if he was just going to place it in the trunk of the car. However, he walked past the car and then started across the street. I couldn’t let him just wander off into the darkness, so I rested the rifle’s forend on the steering wheel, turned my light on with my left hand and activated my PA to tell him to drop the rifle.

He turned and immediately fired a shot at me. I saw the muzzle flash, heard the report, and saw sparks near the front of my car. Still seated, I shouldered my EOTech-equipped rifle and clicked off four rounds through my windshield. I looked up—he was still standing and had the rifle shouldered.

I slammed the car in reverse and requested backup. I jumped out of my car and about 10 seconds later, my cover unit pulled up on my right. He exited his car with his issued Colt AR-15. I told him I was fine and gave him a brief suspect description, pointing to the direction in which I last saw him.

Then we saw the suspect walking quickly toward us—now he was armed with a handgun. Both my cover officer and I told him to drop the gun and stop. He repeatedly said, “That’s not going to happen.” He kept approaching us at the same brisk pace. I mentally kept a line on the street, and he was not going to cross that line—otherwise he would be in range to injure us. When he got to that line, I fired, as did the canine officer. We fired the same number of times, almost in unison.

The suspect dropped immediately. I walked past my car with my gun still on him, then got on the radio to request medical aid. Through the investigation, it was found that I initially fired four rounds through my windshield and the canine officer and I each fired six rounds in the second engagement. One of my first rounds struck the suspect in his right side, causing a large laceration. There was windshield safety glass embedded in his shirt near that wound.

Had I not had the LWRC rifle, it would not have been possible to return fire from inside my car. That gun is easy to maneuver within my cruiser. Without it and my ready mindset, I would not be here today.
—MS, CA 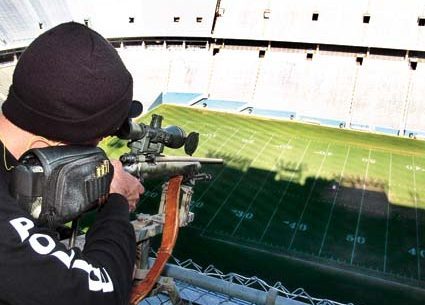 Psycho With a Shotgun Cecil County, Maryland, located in the northeast corner of the…