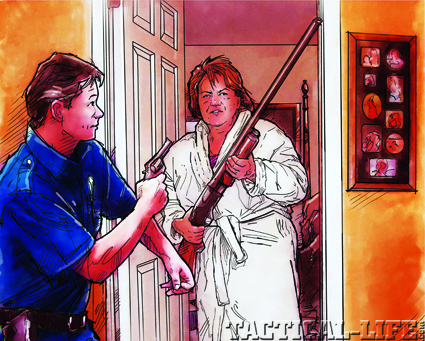 DEADLY HOUSEWIFE
I was riding evening watch patrol in a zone that was primarily made up of residential neighborhoods. It had been a quiet night when I received a call to “meet the party.” Radio gave me no other information and no backup was dispatched. This was no surprise since this type call was normally very mundane. That was not going to be the case this night.

I arrived to find that the house was a typical ranch style residence in a middle-income neighborhood. The husband, who had called the police, met me at the door and invited me into the living room. He explained that his wife was depressed and had locked herself in the bedroom and was refusing to come out. My first question was, “Are there any weapons in the bedroom that she could use to hurt herself or us?” The husband said there were none, so down the hall we went. The master bedroom was located at the end of a hall with two other bedrooms and a bathroom off the same hallway. I let the husband go first as he knew where we were going.

As we started down the hall, the bedroom door opened and the wife stepped into the hall with a 26-inch Remington 870, 12 gauge shotgun in her hands. So much for the husband’s statements! I sidestepped into the bathroom, drew my Smith & Wesson 4-inch Model 66 revolver and aligned the white outline rear sight with the red ramp front sight and put the sights on the wife’s chest. The first thought that came to mind was how my ears were going to ring for a week if I was forced to discharge my magnum half in the hallway and half in the bathroom. My finger was on the trigger and I was applying steady pressure. I noticed that she was holding the 870 in an awkward position with all four fingers wrapped around the grip of the stock. That gave me a little confidence.

As the husband talked to her she decided to up the stakes and racked the 870. My finger got even tighter on the trigger and the hammer started rearward. My focus started to come off the 870 and come back on the front sight when I realized that the silver bolt never completely disappeared when she racked the slide. About the same time, I also realized that I did not hear the “clunk thump” of a round being released from the magazine tube and being fed into the chamber. Based on my experience with the 870, I felt reasonably confident that the chamber of the shotgun was empty. The wife had still not pointed the shotgun at us. As the husband closed the distance and snatched the shotgun from his wife, I eased off the trigger of my M66 and reholstered. I called for EMS and the wife was admitted for psychological observation. 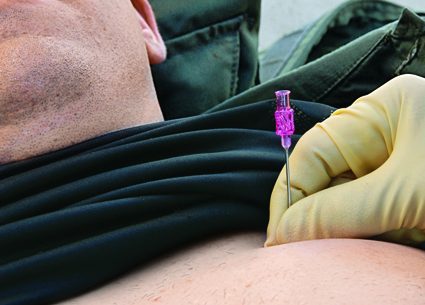