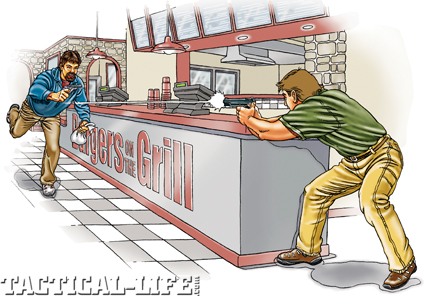 One day I took my family to a fast-food restaurant for some lunch. I was off duty, in civilian clothes, and armed. My wife and daughter were finding a seat while I went to go order. As I stood in line waiting to order, an armed suspect was in the back of the worker area of the restaurant, pointing a gun at the manager and demanding that the safe be opened. I couldn’t see what was going on and only became aware after I overheard a cashier telling another employee that the store was being robbed.

Serving on the SWAT team of my department with over 17 years of experience, I was confident in my ability to handle the suspect but had to make sure the customers were also safe. I had previously discussed a distress signal with my family, that if I told my wife to leave, she was not supposed to hesitate, just grab our child, go and call 911 from a safe spot, ensuring that she told them I was an armed off-duty law enforcement officer and what I was wearing.

As my wife and child headed for the door, I started to direct everyone else to quietly leave. As I was doing this, standing near the front counter of the store, out of the corner of my eye, I noticed the suspect running in my direction with the gun in his hand. He was charging toward me and was closing fast. I instinctively dropped behind the counter for cover, drew my weapon, announced, “Police! Stop!” and took a crouching position behind the counter.

As the suspect continued advancing in my direction, he raised his weapon and I saw a distinct muzzle flash from his gun. The suspect fired repeatedly at me. I went into “combat mode,” fired eight rounds at him, striking him six times.

My weapon was now empty. I moved to another position along the counter, reached for my spare magazine and reloaded. When I came up over the counter again, I could see that the suspect was down and seriously wounded. Then it struck me — there may be another assailant in the store. I scanned 360 degrees slowly. Several of the customers had not left and were still in the store. My wife and child hunkered down in a restaurant booth. But the coast was clear. Later on, my wife told me that the door they went to was locked and she didn’t have time to try another.

Although I survived the gunfight, a different result could have occurred and my wife and child may have been injured. I was just happy that it went down the way it did. —DM, CA 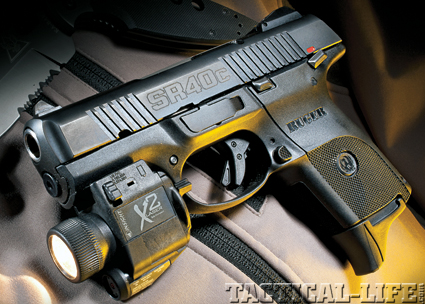