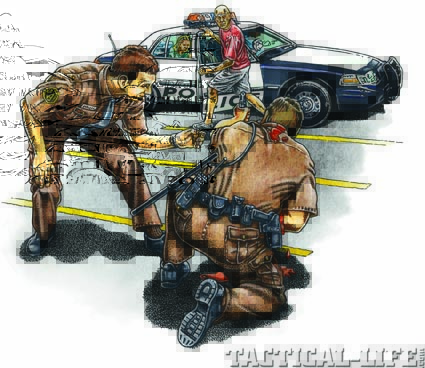 Many police departments have explorer programs so young people can learn about law enforcement. A common part of this experience is to ride along with a police officer to observe them while performing daily duties. At least this is how the day began for Sgt. Marcus Young of the Ukiah, California, Police Department and his 17-year-old police cadet, Julian Covella.

That evening, Sgt. Young was responding to a routine shoplifting call at a local department store where security had apprehended one of two suspects. Young placed the female suspect in handcuffs in the backseat of his cruiser when her alleged accomplice appeared and began to approach with his hands in his coat pockets. Unbeknownst to Young, this man was a violent felon and a member of a prison gang. What Young could see was the suspect’s shaved head, determined look and extensive tattoos, including devil’s horns on his forehead.

Sgt. Young ordered the man to stop and take his hands out of his pockets. The suspect admitted to having a concealed knife in his left pocket. As Young placed his hand on top of the suspect’s hand to disarm him, the man drew a .38-caliber snubnose revolver from his right pocket and opened fire at point-blank range, emptying all five chambers. The first shot hit Young in the cheek, exiting the back of his neck. Another shot hit his side and was stopped by his ballistic vest, but it knocked the wind out of him. As Young went down, a shot entered the gap between his neck and ballistic vest, skipping across his back. Another shot shattered his right arm, rendering it useless, and the knife tore a gash in his left hand.

Young dropped to his knees in pain and shock, his assailant standing over him still armed with a knife. It was at this point that the store security guard tackled the suspect to the ground and wrestled with him for control of the knife. Despite his heroics, the suspect gained the upper hand and stabbed the security guard, leaving him for dead. The suspect then turned his attention to the police cruiser, which contained a loaded shotgun and a select-fire patrol rifle. Ignoring the screams from his handcuffed female accomplice, the suspect attempted to free the secured weapons.

Unable to draw his service pistol, a .40 S&W Beretta 96, witnessing the unfolding horror before him and quickly losing focus from his injuries, Young called out to unarmed police cadet Covella, who had taken cover when the shooting started. Young ordered Covella to draw his sidearm for him and place it in his injured left hand. With the suspect distracted, Young, still in a kneeling position, took careful aim and fired four shots, fatally hitting the suspect in the torso and head and ending the suspect’s rampage. In fact, a later search of the suspect’s vehicle uncovered a cache of five pipe bombs.

“I survived because of many years of ongoing training, the actions of two brave men, and because God was by my side,” said Young. For his heroism and refusal to give up despite career-ending injuries, Sgt. Marcus Young was awarded the 2003 National Rife Association’s Officer of the Year award, the organization’s highest honor for police officers. —JA, V 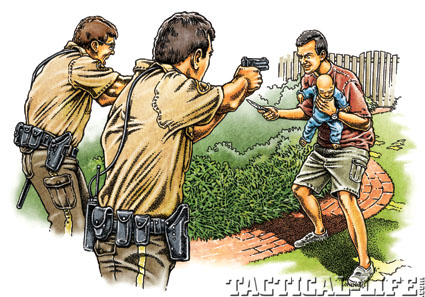 Standing on the front lawn of his home in a Riverside, California, suburb, the suspect yelled at police to shoot him. In one hand he held his infant son, and in the other he held a knife angled over the baby’s throat. “Come get me, I’m right here!” the man said. “You can kill me, but my son’s coming with me!”
Just minutes earlier, deputies had been dispatched to the house after a woman inside called 911 to report a violent fight with her boyfriend. Arriving in their patrol cars, the deputies were immediately approached by concerned neighbors, who directed them toward a man pacing on the yard in front of the home, yelling at the top of his lungs. As they walked toward him only expecting to deescalate a simple domestic dispute, the deputies saw the baby and the knife.

Both simultaneously broke the retention straps of their holsters and drew their semi-automatic duty sidearms. Leveling their sights on the suspect, the closest deputy ordered the man to let the child go and drop the knife. Ignoring them, the suspect held the baby at his chest as if he were a shield and retreated into the home.

Following him inside, the deputies passed the threshold of the door and confronted the suspect in his living room. Still holding the knife to the baby’s throat, he repeated his earlier threat to end the child’s life with a single motion of the blade. Blood was already visible on the infant’s neck as the suspect tightened his grip and applied pressure.

Deputies again ordered the man to release the child and drop the weapon, but again he failed to comply. Fearing for the baby’s life, a deputy, with his sights shifting from the man’s head to the arm holding the knife, squeezed the trigger of his sidearm and sent a round into the suspect. Four more squeezes in quick succession delivered four additional rounds into the suspect’s body, causing him to step back and drop both the child and the knife before falling to the floor himself. Immediately closing on the suspect with their weapons still drawn, one deputy kicked the knife away from him before applying handcuffs while a second picked up the child and ran to the street. Calling for an ambulance, the officer applied pressure to the infant’s wounds and comforted him until he saw the ambulance pull onto the street.

Though seriously injured by the suspect prior to the deputies’ arrival, the infant suffered no wounds in the shooting and was quickly treated at an area hospital, soon to be released to his mother. The suspect, shot multiple times in the arm and torso, sustained non-life-threatening injuries. After being treated for his wounds, the man was booked on suspicion of torture, assault with a deadly weapon, and willful child cruelty causing injury.

The heroic actions of the deputies in this case saved an infant’s life, spared the suspect’s, and prevented a prolonged standoff. Responding to domestic disputes is one of the most dangerous aspects of patrol, given the emotional state of the subjects involved. Callouts for these incidents can quickly turn deadly, and when they do, it will take training and resolve to end them safely without the loss of an innocent life or that of a responding officer. 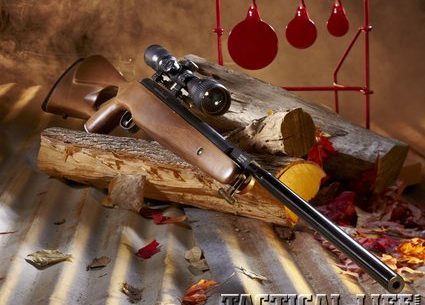