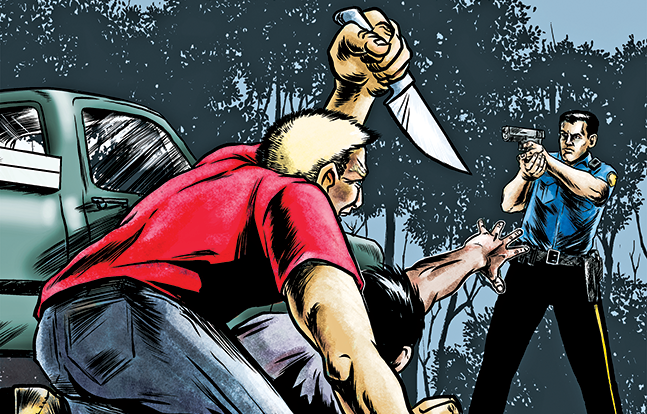 It Happened to Me: Psycho Slasher
Comment(s)

Around 11 p.m. on a Thursday evening, a call went out on the police band radio that there had been an attempted stabbing and vandalism at a small party in a rural area.

At about the same time, I learned en route to the scene that an injured young man had driven himself to the local hospital, reporting that he was stabbed repeatedly by an unknown man while attempting to pick up a friend at the same address as the disturbance. As responding officers would later find out, these two incidents were committed by the same suspect and his plan for carnage wasn’t over yet.

A lone officer near the end of my shift, I responded to the radio call about the disturbance at the party and arrived before any other officers. I arrived at the scene, stepped out of my car, and was greeted by the woman who threw the party. She explained that the suspect in question had apparently been mixing drugs and alcohol earlier and began starting trouble at the gathering.

When he was asked to leave due to the trouble, the suspect approached the homeowner brandishing a knife and threatened to stab her. He then walked over to a car in the driveway and began slashing the tires before leaving the scene. I got a description of the suspect and went to my car to broadcast this information to other officers on their way.

As I got to my car, I heard yelling and then saw a man rushing toward me—the man was yelling for help. Running behind him was a man matching the description of the suspect. He was holding a knife and closing the distance quickly.

I was able to run around his car in time to see the victim fall to the ground. The suspect straddled the supine victim and began stabbing him repeatedly. I drew my sidearm and moved closer. Knowing I could not fire at this point without endangering the victim, I commanded the suspect to freeze. Instead of obeying, the suspect looked up and fled in the opposite direction.

I gave chase, and as we approached a wooded area, the suspect suddenly stopped and turned toward me—still holding the knife and ready to attack. Knowing I was physically incapable of stopping quickly enough to avoid being injured or killed, I fired my service pistol and the suspect fell. It was over as quickly and inexplicably as it started. Autopsy reports indicate that the intense combination of drugs and alcohol may have fueled these attacks, but definite answers will never be known. The suspect was killed on the scene, and the victim he attacked in front of me survived.

While it was well over 30 years ago when I pinned on a badge, I still remember hearing the old-timers telling war stories about “back in the day.” Tradition holds that a legitimate war story must start with “There I was.” Two acceptable substitutions that can also be used are, “Well Chief, no one was more surprised than me” or “Chief, at the time it seemed like the right thing to do.”

This one starts with a “there I was.” While on an out-of-town trip, I found myself being invited on a ride-along with an officer from a large Midwestern city. It is important to note that I was traveling by air and on personal business. I packed light, with a S&W 642 J-Frame stoked with Speer’s 135-grain Gold Dot +P ammo, which is specifically designed for short-barrel revolvers. As with all of my J-Frames, the 642 was equipped with Crimson Trace Lasergrips. I used a Galco Ankle Glove and carried a reload in an old HKS Speedloader in my right pants pocket. In my left pocket I carried a SureFire E1B flashlight. I felt that this would be adequate for any personal self-defense situation I might find myself in.

About 30 minutes into the ride, the officer received a call to meet an informant concerning a vehicle that was believed to be trafficking in guns. He returned with a description of an older black Ford conversion van with large windows in the rear. As we started to cruise the area, I removed my 642 and placed it in my waistband in an appendix position. Not that I expected trouble, but just in case.

As we pulled up in a cul-de-sac, we observed a van matching the description backed into a parking place. As we drove past the van, I looked through the windshield and observed that no one was seated in the van. It was then that we observed a subject just hanging out next to the van. The officer approached the gentleman and started to conduct a field interview. I flanked the officer as he conducted a pat down and started obtaining some basic information. Once the situation was stable, I walked over to the van to take a look inside.

Here comes the part where I say, “Chief, no one was more surprised than me!” As I walked up to the front-left fender, I illuminated the interior with my light and, to my surprise, saw a suspect lying down between the seats. His feet were pointing forward, and he was looking right at me. I gave the appropriate commands, telling him to show me his hands. Once I saw his hands were empty, I directed him to get in the seat and keep his hands where I could see them. As he sat in the driver’s seat, he dropped his right hand down between the seats. This was getting interesting! I drew my 642 and moved toward the right-front fender with the intent of getting a better view of his right hand. It was then that I noticed a pistol on the floorboard between the seats.

I raised the 642 and lit up the suspect with the Lasergrips. I also encouraged him to not touch the pistol and raise his hands. I distinctly remember him looking down at his shirt and seeing the red dot on his chest. As I was processing the threat, I was keenly aware that a windshield of a vehicle is a tough barrier. My plan was to put two rounds through the windshield as I moved “off the X” and toward the front passenger door. If there was still a threat, I would put at least two more rounds through the passenger window, knowing it would shatter after the first round. If I ran dry, I would seek cover behind the car parked next to the van and reload from my speedloader.

Fortunately, the suspect complied and was taken into custody without further incident. The pistol in the floorboard had one in the chamber and a loaded magazine. Another pistol with a 33-round magazine was found in the rear of the van.

That night, there were several factors that came into play. First, I had extensive trigger time with the 642, which included firing with it one hand unsupported. Second, that training, combined with the laser, gave me confidence that I could put rounds on the target. Third, I firmly believe that the Crimson Trace laser prevented the situation from escalating. Finally, having done ballistic testing with the Gold Dot load, I was confident that the ammunition would perform properly. I also followed some sound rules instilled in me during my rookie days. If you carry a gun, carry a light, always carry a reload, know your equipment and have a plan. It was good advice in 1978, and it remains so today.

In 1983, I was a member of the Metropolitan Enforcement Group, a tri-agency drug enforcement team. One summer day, our team was summoned to take part in the raid of an outdoor drug lab run by an outlaw motorcycle gang. Interestingly enough, our unit had just read a puff-piece article in the newspaper that had interviewed then club president. He had convinced the reporter that the gang were misunderstood, and were merely “a group of fun-loving guys that just liked to get together on the weekends to ride motorcycles and go fishing” and had no involvement in any criminal activity. My unit, however, was unconvinced.

Our team met at the sheriff’s office along with numerous officers for the briefing and assignments. The operation was being run by the DEA, then a still relatively new federal entity. They had been running a sting operation locally, and had sold the gang members through a “front” chemical supply company enough of the precursor chemicals to make 600 pounds of methaqualone. Methaqualone, also known by the trade names as Quaalude or Sopor, was a sleeping medication that became the “date rape” drug of the 1980s. Methaqualone could be ingested as a pill or smoked. The biker gang had rented a small piece of property owned by a farmer for the weekend, no questions asked. The site was on a hill, deep in the woods.

We prepared for the raid and were parceled into teams. There were more cops there than I had ever seen for a mission in one place: DEA, sheriff’s deputies, Ohio Bureau of Investigation agents, municipal cops from the two towns in the county, a game warden who knew the area well—all in all some 40 officers. We were warned that the bikers were heavily armed and that the precursor chemicals, one of which was acetic acid, were dangerous. We were to be careful if we had to fire our guns because the explosion risk was high.

We positioned in the woods below the site and awaited the signal to charge up the hill, literally, and take down the lab. Lying prone in the leaves, we could see that the bikers were better equipped than we were, at least in theory. They wore gas masks (which wouldn’t actually protect them from the chemical vapors) and had a generator running that powered large fans, which were blowing the vapors away from them and down on us.

We got the signal and moved up hill. A DEA agent and I immediately confronted one of the biker “chemists.” He had pulled a folding knife and was holding it in his right hand, pointing it at us. We had our guns pointed at him, ordering him to drop the knife. He had a gas mask on. During our commands for him to drop the knife, I inhaled something—I have no idea what—that triggered an instant command to my brain to vomit. I refused the command. I wasn’t going to puke in front of the biker, who was still a threat.

After a few more commands, he dropped the knife. The DEA agent and I cuffed him. We arrested 15 suspects at the lab and seized about 100 pounds of manufactured methaqualone, as well as all the precursor chemicals purchased at the sting lab that were contained in 55-gallon drums.

We secured the lab, and DEA did the cleanup. No shots were fired, and the aforementioned president of the club was not fishing that day. We arrested him at the scene, as he was helping with the methaqualone manufacturing process. 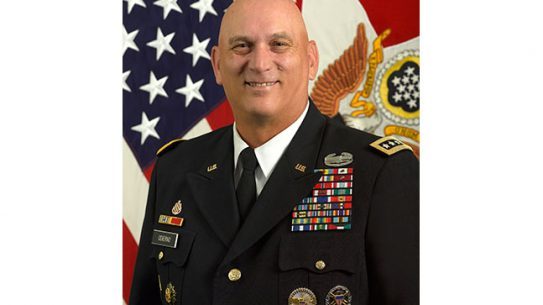