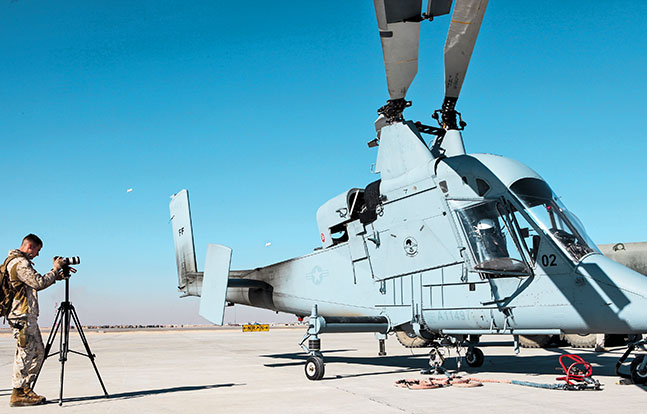 1 of 5
K-MAX Unmanned Helicopter Keeps Aircrews Away From Risk
The K-MAX platform has two sets of rotors mounted side by side that turn in opposite directions. This configuration allows for superior stability and power while eliminating the need for a tail rotor. 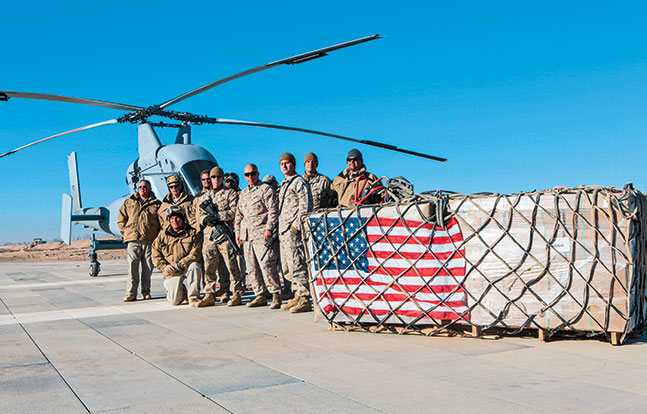 2 of 5
K-MAX Unmanned Helicopter Keeps Aircrews Away From Risk
Marines in Afghanistan pose after completing their first unmanned K-MAX cargo delivery—about 3,500 pounds of food and supplies—in a combat zone. 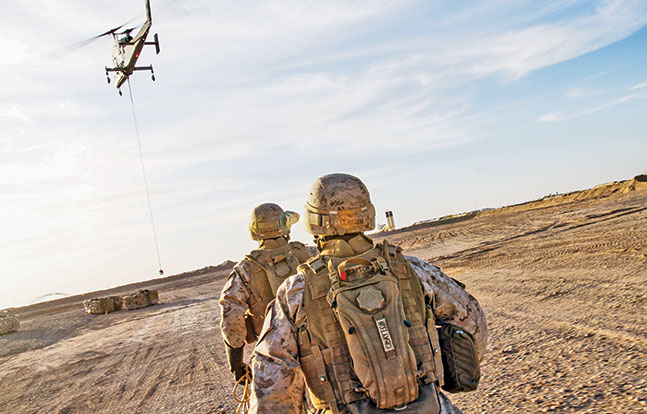 3 of 5
K-MAX Unmanned Helicopter Keeps Aircrews Away From Risk
The Marine Corps is pioneering the use of unmanned helicopters as an alternative to alleviate the need for ground convoys. Here landing support team Marines with Combat Logistics Battalion 5 rush toward a hovering K-MAX unmanned helicopter in Helmand Province, Afghanistan. 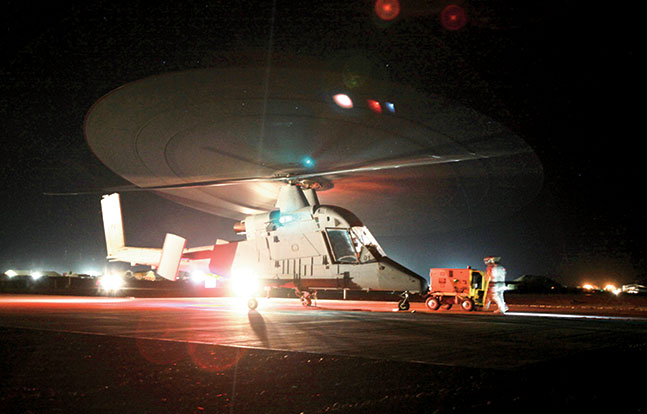 4 of 5
K-MAX Unmanned Helicopter Keeps Aircrews Away From Risk
A K-MAX helicopter serving with Marine Unmanned Aerial Vehicle Squadron 1 rests on a helipad while being refueled in Helmand Province, Afghanistan. 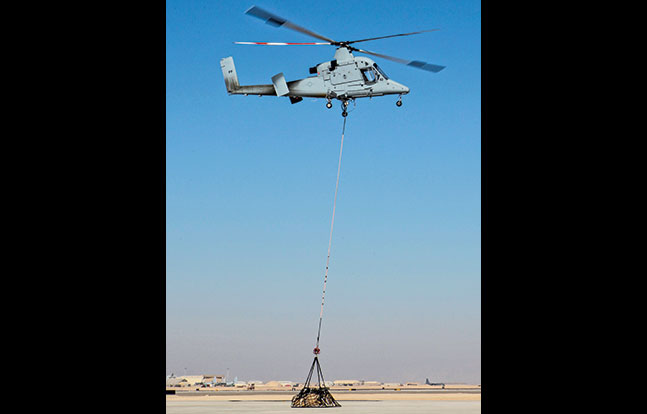 5 of 5
K-MAX Unmanned Helicopter Keeps Aircrews Away From Risk
The Marine Corps is pioneering the use of unmanned helicopters as an alternative to alleviate the need for ground convoys. 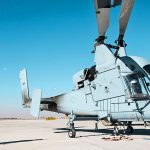 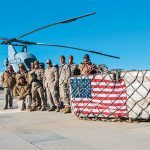 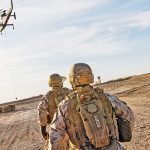 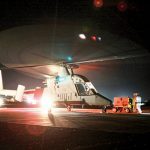 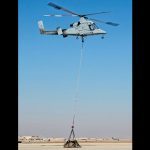 Today, a partnership between the Kaman K-MAX and an advanced unmanned pilotage system from Lockheed Martin is adding to the K-MAX’s success. The Unmanned K-MAX Program, managed by Lockheed Martin, involves the installation of a sophisticated system linked with the K-MAX’s mechanical flight controls in the single-seat cockpit, turning the helicopter into an efficient cargo hauler that moves military supplies without unnecessary risk to aircrews.

The program began around 2008, when the U.S. Marine Corps called for an unmanned aerial cargo resupply platform to alleviate the overwhelming threat to ground vehicles in convoys from improvised explosive devices (IEDs) as trucks provided logistical support to outposts and combat units in the field. In addition to the threat of attack, ground convoys in combat theaters must navigate over challenging terrain that slows trucks to a crawl, making them more vulnerable to ambushes and wasting hours of drive time. Using manned rotorcraft also is wasteful, since they are usually designed and best utilized for more urgent missions than logistical support.

“During the 30-month deployment in support of Operation Enduring Freedom … the K-MAX flew more than 2,100 hours and carried 4.5 million pounds of cargo.”

Although not in active production, the K-MAX was an obvious choice for USMC consideration because of its small size and lift efficiency, and Lockheed Martin developed and produced the pilotage system, delivering the first aircraft just nine months after the initial order. According to Jon McMillen, the business development manager for Lockheed’s Unmanned K-MAX Program, “Installation of the system does not inhibit the K-MAX’s manned-flight capabilities. A pilot can fly it with the system in place. This greatly accelerated system development, since we could fly the K-1200’s unmanned system with a safety pilot on board. We conducted our test flights without restriction because the manned K-MAX is already fully certified. Even though a pilot didn’t touch the controls, our test flights were manned.”

Lockheed’s pilotage system is autonomous—not remotely piloted—meaning that it can operate the K-MAX throughout an entire mission from ignition to touchdown without any intervention. The system is designed around an advanced autopilot with sensors and data links to operate with preprogrammed flight parameters, including altitude, speed and navigational waypoints, from the takeoff point to a destination. Because the K-MAX utilizes simple analog cockpit instruments and mechanical flight controls, with no digital “glass” cockpit displays or electro-mechanical servos, the system installation merely links to control rods. “Ground controller training is relatively easy,” added McMillen. “We can take just about anyone with XBox gaming experience and teach them to handle mission programming. Then, the system handles the flight, completely hands off.”

In many cases, the helicopter does not land, descending instead to a low hover so that ground personnel can unhook sling loads, after which the rotorcraft ascends to cruise altitude and returns to its takeoff point. The rotorcraft also can be flown remotely with inputs during a flight from a ground control station. This is important if situations change after a flight has begun. Quick inputs to change the flight route enable the K-MAX to avoid unforeseen air defenses or other problems. The one-seat cockpit can also carry a wounded or injured troop from an outpost to an aid station far more quickly and safely than ground transportation.

At the program’s outset, the Marines also considered the Boeing A160 Hummingbird, an unmanned rotorcraft with conventionally configured blades and an innovative structure that provides lift with low fuel consumption, giving it exceptional range and flight endurance. However, developmental problems eliminated the Hummingbird from further consideration. Currently, the Boeing MD530F Unmanned Little Bird is contending with the K-MAX for an eventual procurement contract.

Meanwhile, the K-MAX passed all its preliminary feasibility tests with flying colors. Naval Air Systems Command (NAVAIR) awarded the Lockheed-Kaman team a $46 million contract for two aircraft in December 2010 and the K-MAX successfully completed a five-day Quick Reaction Assessment in 2011, leading the Marines to deploy the rotorcraft to Afghanistan for experimental use in combat support missions by November of that year, with the first mission in December. The initial deployment was for six months, but was extended repeatedly until the K-MAXs came home in August 2014. Although one rotorcraft experienced repairable damage after a hard landing, it was quickly replaced. To suggest that the overall experiment was successful is clearly an understatement.

“Lockheed’s pilotage system is autonomous—not remotely piloted—meaning that it can operate the K-MAX throughout an entire mission from ignition to touchdown without any intervention.”

Jamie Cosgrove, a NAVAIR spokesperson, summed up the operation. “During the 30-month deployment in support of Operation Enduring Freedom,” she said, “the K-MAX flew more than 2,100 hours and carried 4.5 million pounds of cargo. The average full-mission-capable rate was 92 percent [meaning that a rotorcraft was ready to go when called 92 percent of the time], and this capability kept vehicles off the road and reduced the Marines’ exposures to IEDs.”

McMillen elaborated on the K-MAX’s impressive statistics. “We flew 1,900 separate sorties at distances up to 160 nautical miles,” he noted. “The concept called for delivery of 750-pounds loads with a daily total of up to 6,000 pounds. We easily handled 30,000 pounds a day with loads up to 4,500 pounds each, including heavy items such as electrical generators and water pumps.”

McMillen added that these mission round trips were usually completed in a couple of hours, while ground convoys using poor or nonexistent roads would require between 10 and 17 hours to cover much shorter distances—if they could get there at all.

“If we assume that two CH-53s were required to fly the same missions as the K-MAXs,” McMillen said, “the deployment performed missions equivalent to about 900 cargo and security vehicles. It also completely eliminated up to 46,000 hours of exposure time for their five-man aircrews and Cobra gunship escorts. As for cost, procurement is likely to be half as much as an equivalent rotorcraft. From an operational standpoint, once you factor in all the indirect factors, flying the K-MAX wasn’t much more expensive than a truck convoy with a security escort. Direct flight costs are about $1,300 per hour, and the rotorcraft requires about 1.4 maintenance man hours per flight hour, a very low ratio. For example, the same ratio for an H-60 Black Hawk has been reported to be up to 17 maintenance man hours per flight hour.”

Although the Marines haven’t decided on a formal procurement program because of budget constraints, the unmanned K-MAX showed its mettle. Kaman has tooling in place and is ready to resume production. In addition, the K-MAX team is ready to offer the system to commercial users for such dangerous missions as firefighting, transport of hazardous biological and chemical materials and to other U.S. and international military customers. 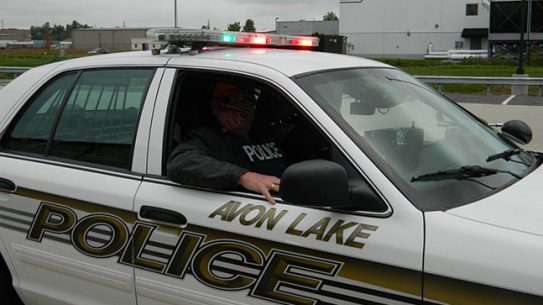