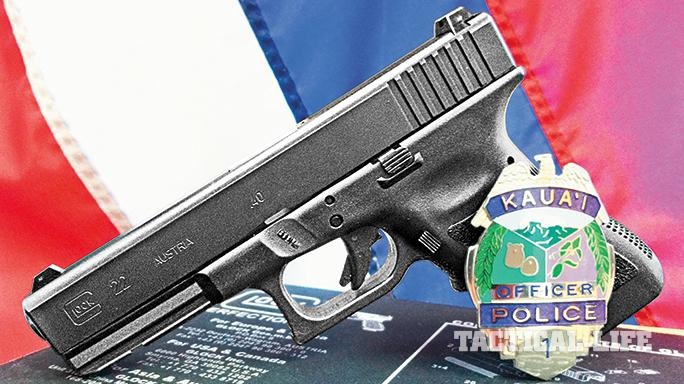 1 of 4
Kauai PD Keeps Hawaiian Island Safe with GLOCKs
The Kauai Police Department transitioned to the GLOCK 22 .40 for its standard-issue sidearm to keep the island’s 70,000 residents and more than 2 million annual visitors safe. 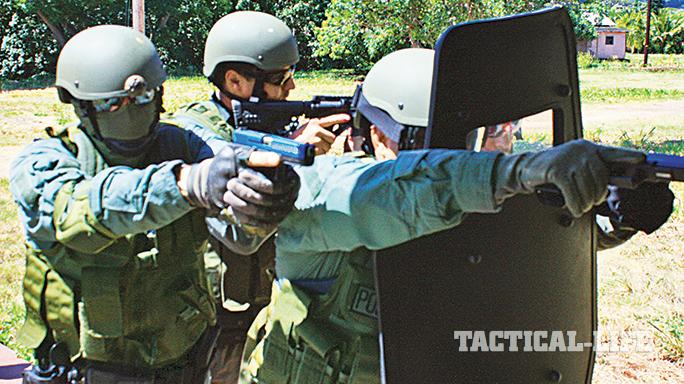 2 of 4
Kauai PD Keeps Hawaiian Island Safe with GLOCKs
Due to the island’s remote location, KPD officers train to resolve a variety of threats, as the nearest backup units are hours and a flight away. 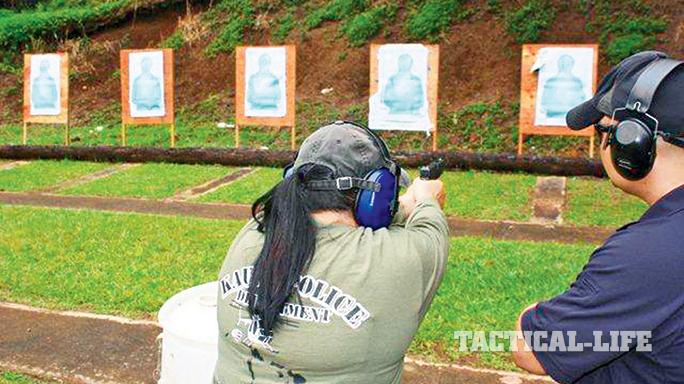 3 of 4
Kauai PD Keeps Hawaiian Island Safe with GLOCKs
Kauai police officers train to protect their citizens and the many tourists who visit the island with their reliable, all-weather-capable GLOCK pistols. The G22 and G23 are considered the Kauai Police Department’s standard service pistols, and officers can also employ the G27 and G35 in specialized roles. 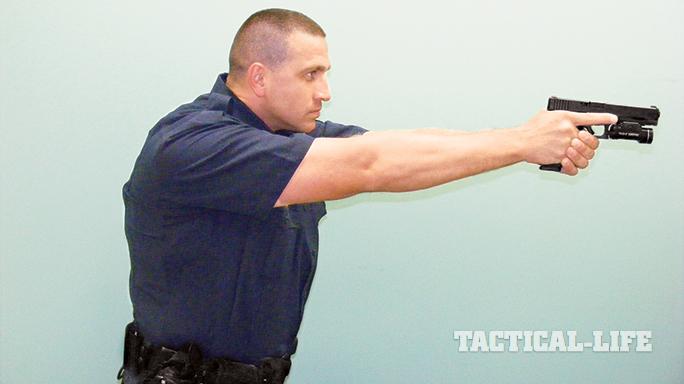 4 of 4
Kauai PD Keeps Hawaiian Island Safe with GLOCKs
“Since switching to GLOCK pistols, KPD officers rest assured that they have the capability to enforce the laws and keep the peace.” 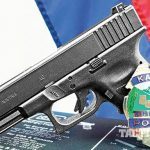 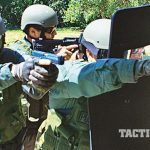 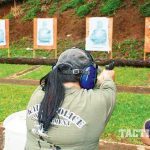 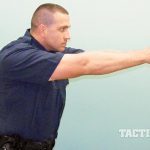 As news of Hurricane Iselle, followed closely by Hurricane Julio, continued to come in, the officers of Hawaii’s Kauai Police Department (KPD) listened intently to the National Oceanic and Atmospheric Administration (NOAA) reports, checked and re-checked their supplies, and strategized about how to keep their families, residents and visitors safe. With lingering memories of the destruction from 1992’s Hurricane Iniki, the last hurricane that touched land on the island, the agency anticipated flooding, strong winds, power outages and pounding surf with wave heights reaching 20 feet.

“Our department and the island were struck with Hurricane Iniki, and a lot of lessons were learned from that,” said Kauai Deputy Chief of Police Michael Contrades. “We take storm preparation very seriously. We plan throughout the year.”

The department does everything it can to ensure public safety throughout an emergency situation like these storms posed, and make sure no instances of looting or civil unrest added another dimension of danger to the island. Kauai is also known for its harmful wild hogs, and these large animals can become unpredictable in a storm, requiring capable firepower. The KPD is a department that thinks about the whole safety picture. Having plans in place, such as for hurricane preparedness, show this dedication to residents and visitors. To help keep the peace, the agency chose to switch to GLOCK pistols several years ago.

“We have just under 70,000 residents and somewhere around 2 million visitors a year,” said Contrades. “Although we’ve grown a lot over the years, it’s still a close-knit community. The person you arrest today, you will probably see them in the store tomorrow.”

Due to this unique lifestyle, and the fact that most people know where the officers live, treating people well is important—and so is having the right tools to do the job.

For governmental purposes, the KPD acts as both a municipal law enforcement agency and the county sheriff’s office. Having previously issued six-shot wheelguns, the firearms instructors at Kauai wanted to update their sidearms. They were looking for a product that would have good reliability, quality manufacturing and ease of maintenance.

“Cleaning what we had was difficult as compared to cleaning the GLOCK today,” Contrades explained. “It’s very easy to clean. Cleaning an older model revolver took a lot of time.” Contrades also said that the simplicity of design was a big factor in the department’s choice of GLOCK. “GLOCKs don’t have an external thumb safety,” he said. “So in terms of training motor skills, you’re not worried about first taking the safety off when you need to pull the trigger.” The KPD is not the only department in the islands that has noticed the benefits of choosing GLOCK. The Maui Police Department and the Division of Conservation and Resource Enforcement (DOCARE) have also switched to GLOCKs.

The Kauai Police Department has 161 officers and five patrol service divisions, including the Traffic Unit and the Hanalei, Lihue and Waimea divisions. Both Hanalei and Waimea have stations and sub-stations, while the KPD headquarters takes up the first floor of the Lihue police station, which also houses the county prosecutor and the island’s emergency operations center. This multipurpose facility was rebuilt after Hurricane Iniki in 1992.

The department handled 40,311 calls for service in 2013, and each patrol officer carried their standard GLOCK 22 as their primary duty weapon. Officers are also allowed to carry a compact GLOCK 23.

While serving the residents and guests of Kauai, each officer embraces the Hawaiian principle of pono.

“It means righteousness, justice and doing what’s right,” Contrades explained. Pono consists of three components: respect, integrity and professionalism. “We first must respect ourselves and then each other and the community,” he said. “We all took this job to serve.”

One of the ways the department’s management showed its respect for its officers was by providing them with quality, reliable GLOCK firearms. The second component, integrity, is about public trust and holding the organization to the highest ethical and moral standards. The third, professionalism, includes holding each officer and the department accountable for their actions and providing professional service. Issuing the officer the right tools allows each of them to focus on things other than whether or not they can count on their firearm when they need it most.

The Kauai Police Department also has several specialty units, including the Special Services Team (SST) and the Investigative Services Bureau (ISB). SST officers carry the GLOCK 35, while those assigned to the ISB, which includes an Adult Section, Youth Services Section and Vice, carry the subcompact GLOCK 27.

“They are easier to conceal,” Contrades explained. “Our plainclothes and narcotics [officers] use them for this reason.”

“Crime is always a difficult thing to control,” Contrades said. “There are a lot of different theories. Essentially, it comes down to the way people feel. We try very hard to enhance the quality of life for our community. Our vision is to have a community free from fear and crime. Generally, our community is free from it. Community policing is always something that we’ve practiced, it’s just not been called that.”

Contrades cited the Community Oriented Policing Services (COPS) grant given to the department, which they will use to fill new positions and provide training to current officers. Having reliable, modern and professional-looking GLOCK pistols helps add to the visual assurance that Kauai’s police officers have things under control and can and will protect their citizens and visitors.

“Essentially, we want the community to trust in us to take control of crime so they feel safe in their homes and workplaces,” Contrades stated. “There are no places you can’t go here, unlike the city. You do have to take precautions, but there aren’t places they can’t go. We want our community members and visitors to feel like it is a truly safe place.”

With an estimated 24,062 visitors on a given day, the KPD works very closely with the Kauai Visitors Bureau and Hawaii Civil Defense to protect its visitors. “Sometimes they are victims as well,” Contrades said. “During disasters we need to be concerned with them being taken care of and kept safe. [During Hurricane Iselle] we opened up a shelter in Lihue for those who might be stuck at the airport. Instead of being there without resources, we provided them a place to stay.”

One of the most unique things about the islands, other than their stark, breathtaking beauty, is their remoteness. Most of their fuel and food has to be shipped in. If one island is devastated by a storm or other disaster, the other islands will step in to help. If all of them are affected, they have to rely on the mainland, and that takes time. The remoteness also affects how law enforcement duties are handled.

“We don’t have access to resources like mutual aid agreements with neighboring police departments,” explained Contrades. “The nearest is Honolulu, which is 20 minutes by flight. It would take several hours for them to gear up and get here. In a major incident, I can’t call to another agency for assistance. We have to take care of things on our own.” Since switching to GLOCK pistols, KPD officers rest assured that they have the capability to enforce the laws and keep the peace.

“One thing I’ve learned is regardless of where the police department is, police work is generally the same,” Contrades said. “We encounter the same things here, just maybe not to the same magnitude. What sets us apart is the aloha spirit. We’re always striving to improve. Switching to the GLOCK platform was just another transition towards improvement, and so far we’ve enjoyed the product and have no complaints.” 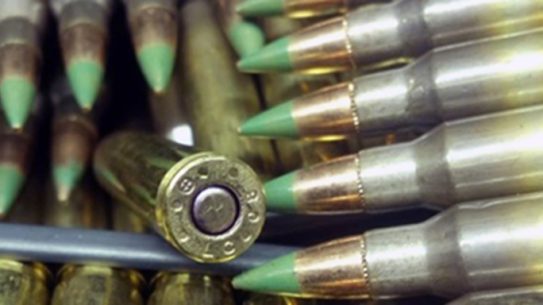 After receiving numerous responses that were critical of the ban's framework, the ATF will...