by Tactical-Life
in Military & Police
0

Most Americans know of the dangerous drug cartels, with their unprecedented violence against innocent citizens and law enforcement in order to protect their activities, including the horticulture of illegal drug-producing plants. However, a lot of us don’t know it is also an American problem that isn’t limited to foreign organized crime, such as that found in Mexico and overseas. Here in the United States today, these cartels have well-financed and ingenuously devised “gardens” with thousands of illegal plants supporting the U.S. drug trade.

The “gardens” are not a few pot plants grown in a backyard plot or randomly seeded in the wild and left to fend for themselves. These are tended crops meticulously planted between native flora to make them hard to see from both the air and ground and fed water and nutrients from buried, reservoir-supplied PVC pipes snaking hundreds of feet down mountainsides. The reservoir is usually a water source like a spring or creek that has been dammed up and lined with plastic to contain the fertilizer-treated water. Although that gives the illegal growers a reliable irrigation source, it deprives the local wildlife of their natural water source or, worse, forces them to drink fertilizer- and pesticide-contaminated water.

To ensure a constant supply of marketable drugs, cartel growing operations are usually multi-acre, well-maintained and well-camouflaged fields containing seedlings and mature plants sometimes over 10 feet tall. On the site of the illegal gardens are also hidden structures for living, as well as cooking and drying the crop for easier transportation. Also present is one of the biggest dangers to both law enforcement and the general public: stocks of concentrated pesticides and fertilizers, some smuggled in from Mexico, as they are not allowed to be used in the U.S. Recently, one of those containers of pesticides was inadvertently breached during an anti-drug operation, resulting in nearly a dozen law enforcement officers being hospitalized for exposure. 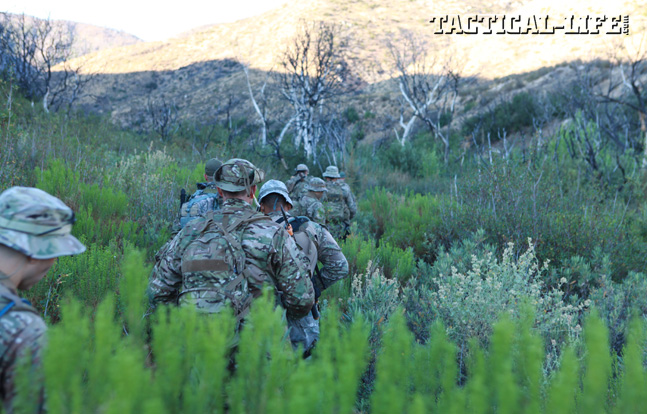 One of these “gardens” was believed to be somewhere in the western part of Los Angeles County and was the focus of an operation by the Los Angeles County Sheriff’s Department’s (LASD) Marijuana Eradication Team (MET) to locate, investigate and eliminate the illegal agricultural activity. Their intel indicated that the growing operation was on the western edge of the Angeles National Forest, located in the San Gabriel Mountains of Los Angeles County in southern California. Since the ANF covers over 1,000 square miles, a lot of it rocky and steep (elevations range from 1,200 to 10,064 feet) and some parts little used, it’s not unusual for criminal enterprises to set up substantial operations within the jurisdiction of the U.S. Forest Service.

Since Angeles National Forest’s rivers provide valuable non-groundwater recharge water for Southern California, the contamination of that water source by the illegal chemical pesticides commonly used is not only a possibility but eventually will occur without law enforcement intervention, so time was of the essence to secure this site. The existing protected and restored native vegetation absorb and slow surface runoff of rainwater to minimize severe floods and landslides in adjacent communities, but the addition of concentrated illegal pesticides (the ingredient in military nerve gases) to the runoff could end up in the water flowing into the taps of Los Angeles homes, schools and businesses. The marijuana growing operation had to be quickly located, occupied and stopped.

TW photographer Jake Swanson and I met up with the MET team early in the morning as they prepared to move to contact with the garden. It was not going to be an easy walk in the sun—miles of uphill, rough terrain needed to be traversed quickly and quietly to prevent any bad guys from knowing where we were.

Since previous operations had been met with violence and gunfire, the MET was armed with ARs, HK MP5s and sidearms. The operators looked more like a Special Forces patrol headed out in Afghanistan than a mix of LASD law enforcement investigators, narcotics officers and patrolmen as well as California Department of Fish and Game and U.S. Forest Service agents. The LASD MET is a “part-time” team consisting of about 60 different operators, with usually about 20 participating on any given operation. The MET is primarily comprised of LASD deputies and members of the U.S. Forest Service and Drug Enforcement Agency (DEA), with this operation being hosted by the U.S. Forest Service, as the garden was on their turf. The MET performed over 40 marijuana eradication operations in 2012 and have done 25, almost one a week, by the time this was written in 2013.

We quietly moved through the dense shrub chaparral and oak woodlands that led to arroyos and dry stream beds that became torrents during the wet season, but were thankfully empty and littered with bleached boulders that had to be walked around or over. The over 80,000 acres of wilderness area of the ANF seemed to be all uphill as we eventually found the entrance to the box canyon that reportedly contained the garden located at the opposite end. At this point it became obvious that we were approaching a drug garden, as telltale abandoned propane tanks, garbage and debris began littering the grounds around us.

The growers bring in plastic sheeting, PVC piping, hundreds of pounds of chemicals, food, propane tanks, tools and everything else needed to sustain the growing operation and the people working on it. What is brought out is the marijuana—and nothing else. All the chemicals, debris, litter, waste and tons of plastic are simply left in the middle of one of the most delicate ecosystems in the country, with no interest of the impact on the area, wildlife or humans downstream.

After a few hours of patrolling, I first smelled the distinctive aroma of naturally growing marijuana before I saw the first plants. Looking ahead through the scrub brush, the mature marijuana plants were visible as beacons because their unique color is unlike anything else in this ecosystem, literally sticking out like a sore thumb. We soon discovered just a few at first and then dozens and finally hundreds of healthy, mature marijuana plants as well as seedlings and cut plants that had already been harvested. Some of the mature plants were well over 10 feet tall, and each one had a small PVC pipe running to it, which supplied the plant fertilizer-enriched, gravity-fed water from its reservoir constructed higher up the mountain.

We kept our heads on a swivel, as the area was covered with dense brush, and although we had encountered no opposition, teams like this had been ambushed before, so the threat was real. However, there were indications (like a camo hat left behind on a trail) that showed some of the growers had either been there recently or fled at our approach and might be close by. I could only guess that unarmed civilians out for a family hike, who might inadvertently stumble upon this secret operation, could be making a fatal mistake.

As we continued to search through the garden, we literally stumbled upon a drying hut so cleverly camouflaged that only from its entrance could it be recognized as anything but a thicket of brush. Inside were tools, gear, dried stalks and a small cooking area. The central quarters were located in an open bunker across a stream bed and uphill from the grow, where the tenders of the field slept and kept watch over their crop. It was also very well camouflaged and designed not to be seen unless walked right upon. In it, like other similar encampments, it had sleeping bags, food and other items needed to sustain several people in the field for as long as they wanted.

Once the area was deemed “Code 4” and secure, the MET split up to address dismantling the water reservoir, collecting and removing the hazardous materials found, and cutting down and collecting marijuana plants that were all over a quarter-square-mile area. All the equipment and materials found were bound, placed in a cargo net and hauled out by helicopter. It was hard work to get there, and even harder work to dismantle the illegal marijuana garden. Over the next few hours, the operators worked at pulling up irrigation piping, destroying the toxic reservoir feeding the plants and seedlings, and cutting down the plants themselves. Load after load of PVC piping, chemicals, propane bottles, debris and trash were airlifted out to make the valley as close to pristine as possible.

At the end of the day, a landing zone was cleared of dead trees and debris to extract the team by helicopter. As we sat around waiting for the lift that would take minutes to cover the ground it took all morning to climb, the team chatted and took count of the plants destroyed during the operation. After each person was done specifying how many stalks that they had individually cut and lugged down the slope to be lifted out, the final total was slightly over 3,000 illegal marijuana plants removed from the forest. The operators were sore, thirsty, had thorns through their gloves and bruises on their arms and legs, but everyone knew that what they were doing was extremely important to their country, the environment and their fellow Californians.

Even as the debate over the legalization of marijuana continues, there is no evidence or reason to believe that illegal grows such as this would “go legit;” instead they’d continue to operate outside the law using toxic substances that endanger entire ecosystems, including the ones we humans live in. The growers would have little reason to share their profits, commit to inspections or be limited to the chemicals they use, so boots-on-the-ground teams like the Los Angeles County Marijuana Eradication Team that seek out, locate and destroy these gardens to protect American lives and health will continue as long as there is a demand for their supply.