Editor’s Note: We pay $100 for each story we print. Send to the magazine, c/o “Police Stories.” Or e-mail to [email protected]

It was a typically quiet, autumn Friday night in our small island community off the coast of Washington. The sergeant and I were in the squad room when we heard someone yelling from the lobby. We ran up and saw a man slumped against the dispatch window, with blood running out of a wound in his left side. He was yelling that “Dan” had a knife and was killing his girlfriend by the theater.

I jumped in my patrol car and drove the short block to the theater. I saw a silver compact stopped in the middle of the street, with both doors open, window glass all over the road, and figures moving inside the car. I took my flashlight and moved quickly towards the open driver’s door. I heard a voice I recognized as belonging to one of our local drug experimenters yelling, “I’m going to break your neck, mom!”

I lit up the inside of the car and saw the female victim in the driver’s seat, with Dan kneeling on the passenger seat. He had his arms wrapped around her throat in a neck-breaker hold. I couldn’t see his hands and I didn’t know if he still had the knife. He was twisting the victim’s neck and screaming at her.

I drew my revolver and ordered Dan to show me his hands and release the victim. I moved closer to the car as I repeated my orders, but Dan seemed unaware of my presence. I was about 6 feet from the open door when Dan finally realized I was there. He started screaming obscenities at me and rose up on the seat to apply more pressure to the victim’s neck.

I dropped to one knee so we were on the same eye level and pulled my flashlight back to my shoulder so my revolver was clearly visible. I said, “Dan, let her go or I’ll blow your head off!” I saw Dan’s eyes focus on my .357MAG 6-inch barreled Smith & Wesson 686. His eyes got wide and his grip went slack. The victim broke free and crawled away, towards the back of the car. I could see his hands were empty, but he was wearing a heavy winter coat with numerous pockets and I still didn’t know where the knife was.

I backed up and ordered him out of the car. He was screaming that he was God and saying, “Kill me!” But his eyes never left my revolver. I was able to get him out of the car and prone him out. The sergeant arrived and cuffed Dan, whose eyes were still focused on my gun.

As soon as he saw me put it back in the holster he went off again, kicking and screaming and trying to bite us. He was placed in leg restraints and hog-tied. At the station he had to be placed in the restraint chair and sedated to keep from injuring himself. We later found out that he had been at a friend’s apartment watching an “end of the world” movie while experimenting with large amounts of LSD. He had run screaming into the night after a particularly violent scene. The original victim and his girlfriend had been driving home and had seen him running down the middle of the street. They stopped to see what the problem was and Dan had punched in the driver’s window, yelling at the driver “Mom, you’re killing me!” The male passenger got out and came around to try and calm Dan down.

Dan had unfolded a small pocketknife when the passenger wasn’t looking and stabbed him in the side as he approached. The passenger then fled to the sheriff’s office to get help. Dan jumped into the car and told the driver he was God and she was going to die. He then put the knife on the dash and told her he had to break her neck. Luckily I arrived a few moments later.

I have always been a believer in visual deterrence when it comes to firearms for law enforcement work. My fellow deputies have given me a hard time for lugging around my “elephant gun” while they carry their sleek automatics, but there is no doubt in my mind that the powerful appearance of my S&W 686 is what got compliance out of Dan. Later Dan wanted to try for lesser charges or a reduced sentence because of his diminished capacity under the effects of drugs. His attorney advised him to forget it and plead guilty, as no jury would believe that he was so strung out he didn’t know what he was doing or why, but had followed all of my orders while I was pointing my gun at him, and then went “insane” again when I put my gun away. 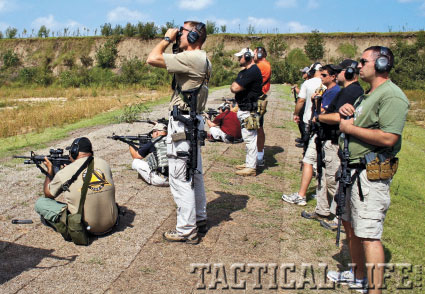 Editor’s Note: We pay $100 for each story we print. Send to the magazine,…