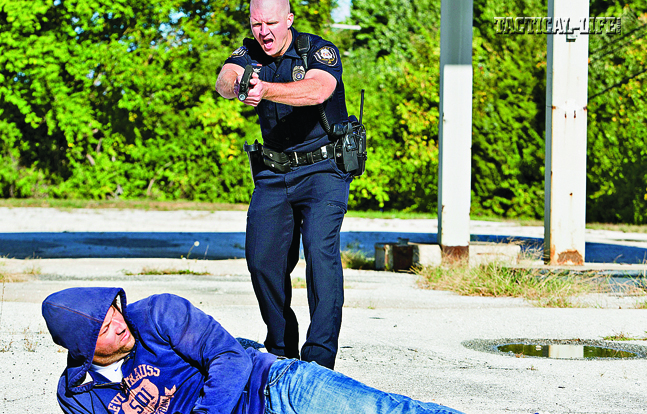 1 of 5
Maintaining Prone Control 1
Approaching a prone suspect on your own can be very dangerous, as they can draw a hidden weapon very quickly. Ensure both of the suspect’s hands are visible before approaching. 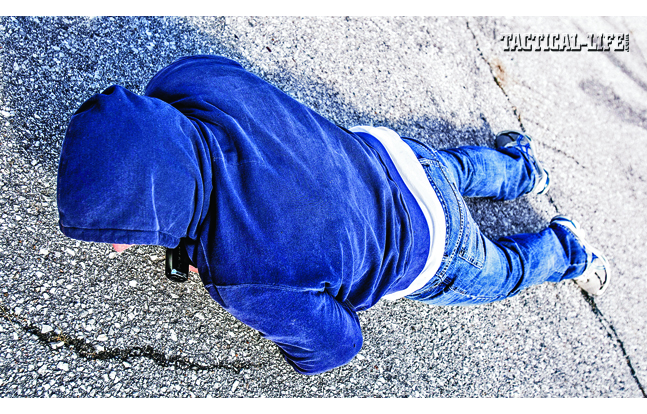 2 of 5
Maintaining Prone Control 2
Suspects who refuse to move their hands from under their body should be a red flag for an approaching law enforcement officer. 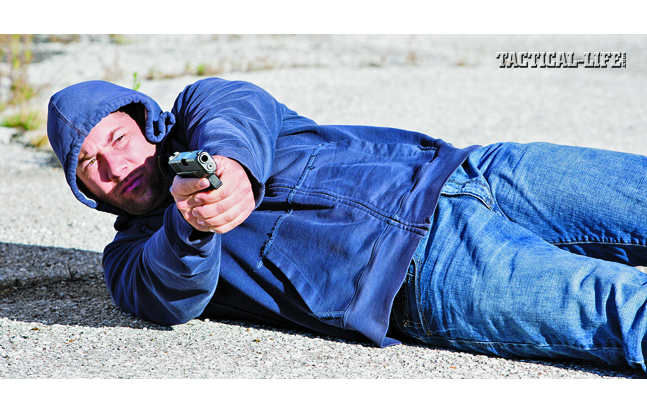 3 of 5
Maintaining Prone Control 3
Shooting from the ground is much easier than many think, making an armed prone suspect incredibly dangerous to officers. 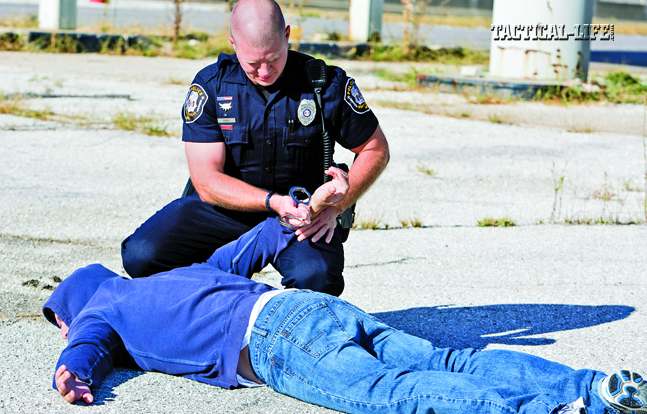 4 of 5
Maintaining Prone Control 4
Proper prone control is much safer for officers when the suspect’s hands are fully exposed and other officers are able to provide additional coverage. 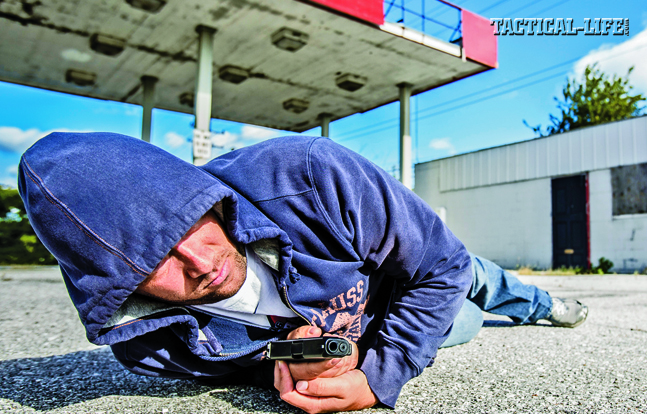 5 of 5
Maintaining Prone Control 5
An armed suspect can quickly engage a responding officer from prone by rolling slightly and bringing their weapon into play. 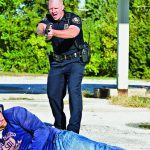 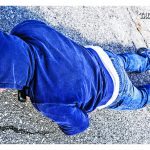 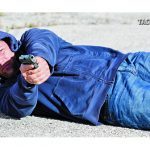 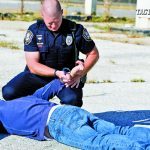 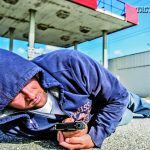 Thanks to the efforts of the people at the Force Science Institute (FSI), some of the mythology that comes from “prone control” is finally being proven. While attending their investigator certification program not too long ago, there was a study being conducted dealing with an actual prone suspect and the dangers of controlling them in this fashion. FSI is known for scientifically studying these events and providing empirical data. Much of what they have produced has been groundbreaking and, ultimately, has saved officers’ lives.

FSI’s newsletter #164 points out some of the problems of prone control and provides some insight into the findings of the study. It is not that prone control is ineffective—it simply is not the “be all, end all” that many in the arrest-control training world thought it was. Much of what is done in that world has been purely anecdotal, a characteristic shared with the firearms world. What “works” was often never proven to work, and it was nothing more than the opinion of an “expert.” More often, old techniques are just the result of doing “what we have always done.” Anyone who has been in the SWAT world can attest to the fact that many times what works is as much a matter of luck as proven technique. Unfortunately, change usually doesn’t occur until a technique fails. Thankfully, the trend these days is to actually prove the effectiveness of tactics in training and not simply rely on opinion. This latest finding provides some excellent information that can be used to alter tactics to be effective.

Ground Threats
Having received my black belt in judo in 1984, I’m certainly very familiar with grappling. My judo training was very traditional by today’s standards; it was rigorous, threat-specific, and a ton of time was spent on the ground—not only how to put someone there, but how to prevent it occurring to you. At the advanced levels, it is common to lure unsuspecting people into your grasp from the ground. Certainly effective then, the mixed martial arts fighters and modern jujitsu experts of today have taken ground fighting to a whole other level.

So, when I entered the arrest-control program as an instructor in 1990, it surprised me to learn that other instructors somehow considered anyone on the ground as being at a disadvantage. As a judoka, the ground even offered me some advantages. So the concept was foreign at best and dangerous at least in my opinion. For me, and many others of the same experience level, the dangers of approaching someone on the ground have always been real. Yet, many systems all but eliminate any kind of control other than prone. At the slightest provocation, the suspect was “grounded.” If that grounding occurs while you maintain some level of physical control and contact, maybe it is effective. But putting someone on the ground and then approaching them is a whole other story.

Prone Control
There are really two kinds of prone control. One is the control you maintain while taking someone to the ground. This generally occurs after you are hands-on, or as you go hands-on. With proper training, this is quite effective. It is all about removing someone’s balance while maintaining control, through pain compliance or other means. This is more about takedowns and control holds. Again, given proper training, this works very well. There are countless systems that do basically the same thing—they just have different names or marketing. Man has been grappling for thousands of years, so the basics are the same, but the methodology is different. Where it gets dicey is the second type—putting someone on the ground followed by the need for you to make contact. The results can be vastly different, and this may be where some of the confusion has occurred over the years.

The assumption was always that by having someone go to the ground, they could not move quickly, giving the standing officer an advantage. But I have just not found that to be true. The ground is a great way to start movement. In fact, most martial arts gather their power from the ground. Starting close to the ground does not always slow you down—it can make you faster.

If you are going to prone out a suspect, the ideal situation is to keep a suspect’s hands visible. While moving from a position where your hands are visible can still be problematic, it is much better. At least in this instance the suspect has to move to reach a hidden firearm that may be under his or her chest. That adds the decision time, the movement to the chest and then the movement to fire. This provides time for officers to react. Trouble arises if their hands are under their chest. Every officer knows that feeling when someone will not show you their hands. They are on the ground and will not move their hands from under their chest.

With the help of the Hillsboro Police Department in Oregon, who worked in conjunction with the FSI, the study factually proves the ability to move quickly from a prone position. The average time it took to move from a prone position to firing a weapon, drawn from being hidden under the chest, was 0.62 seconds, with the fastest being 0.27 seconds. Given data from an earlier study, the fastest person managed to draw from the holster to fire one round in 1.31 seconds. That is fast, as even moderately skilled competitors are about that fast, and they are shooting paper that does not shoot back. So, if your duty gun is holstered, you are likely to get shot prior to even getting your gun out. If you have your weapon out and you are on the trigger, it takes 0.25 seconds to press the trigger, almost matching the time it took their fastest participant, who fired his weapon in 0.27 seconds, without taking into account any reaction or decision time. These tests were done firing from five different directions, so any possible way to roll up and shoot was considered. This proves what many of us have known: It may be best to wait until you get their hands out. If not, let’s exhaust other options before we approach.

Safer Tactics
There were a couple of conclusions that could be drawn from this study when it comes to training. One was that, on average, suspects were slowest when moving to shoot towards the rear. Not the front, as many had assumed. And understand that they were not slow—they were slower!

It is always dangerous to approach any suspect lying on their hands, period. Secondly, it may be a good idea to change things up and do whatever you can to keep the suspect’s focus in question. Have one officer give commands while another approaches. Maybe have more than one officer approach at different times—anything to keep them off their intended movement and unable to focus. If at all possible, have the officer who is approaching be able to do so without the suspect knowing where they are coming from. Anything you can do to accomplish that task is better.

Lastly—and this is the most important—take the time to reproduce this at your department with your training unit. Grab a “blue gun” and try this from every possible position. Take what you do and make it work as best you can. The idea is to give your officers the best chance they can. Studies are great, but practice is better. Put it to the test and see what you find out, then make adjustments to your tactics and techniques accordingly. Even better: Do this regularly. Attending trainings held by others can be useful for sure, but sometimes the best training is only as far away as your training room. All it takes is time, dedication and maybe a few sore muscles. For more information, visit forcescience.org or call 507-387-1290. 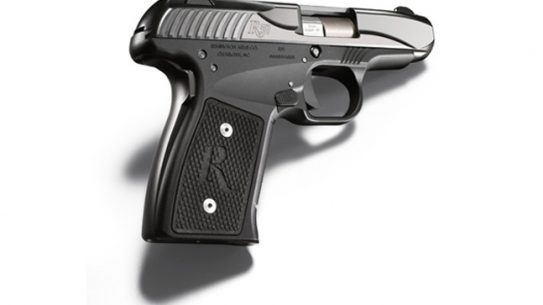 With the Remington R51, the company has decided to look to their past for...