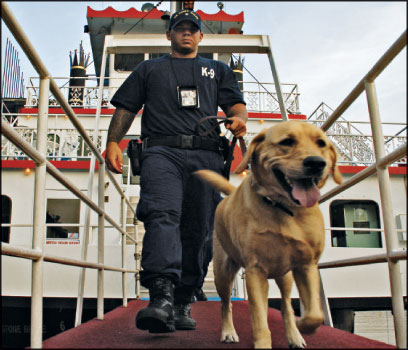 I have been involved in numerous searches to capture fleeing or escaped suspects, with and without K9 support. Most of the time these involved suspects who had bailed out of a car following a traffic stop or pursuit, in the service of warrants, or had escaped from custody. In all of these situations, especially those involving fields, vacant lots or wooded terrain, (even relatively small woodlots) one common denominator was that we couldn’t find the suspect if they had a good head start and we lost sight of them, especially with no available air support.

Occasionally, a short distance track was easy through snow or a muddy area or if they were bleeding, but beyond those extreme conditions we were usually out of luck. We either never found them at all, or later found them at their homes based on some identifying info they left behind. Having a K9 unit with us didn’t make a difference on outdoors tracks, although they worked pretty well in building searches. I can’t remember one successful track that resulted in an apprehension with a K9 (different dogs, handlers and agencies) where I was functioning as the support or backup officer.

A Better Method
Enter Storm Dog Training in Delaware County, OH. Owner Mike Pennington is a retired S.W.A.T. Officer and K9 Handler with 15 years of combined experience. He is a certified high-risk tactical man-tracking instructor, and conducts specialized classes in K9 tactical man tracking. He and fellow retired K9 Handler Sgt. Gary Rockefeller conduct their Level 1 and 2 Tactical K9 Tracking Courses for individual officers and agencies throughout Ohio. This training isn’t just for K9 officers. In fact, no dogs are used in the Level 1 course. The course assumes that after training, your agency will want to develop a tactical tracking team, and integrate the K9 and handler as part of the team and revised search methodology.

I was introduced to the Tactical K9 Tracking “system” when I attended an attenuated portion of their Level 1 Tracking Class at the Khyber Interactive “1 Inch to 100 Yards” Symposium in Laughlin, NV. Their Level 1 class was a revelation.

The Level 1 class teaches the basic skills needed to safely and effectively track a human in rural, suburban or urban terrain, and this is important—with or without K9 support. I say “support” because that is one of the first major points of their training: When working with a K9, you can’t let the dog lead the search. This methodology represents a major paradigm shift in how these situations are, or ought to be, handled. The second major point of the Level 1 class is that the overall skill concepts are not just for K9 officers. Patrol officers can benefit just as much from learning the basics of following signs and indicators specific to human paths of travel.

This helps a Level 1 trained officer to become an effective tracker and increase the chance of finding the fugitive or lost person, as well as more effectively assisting a trained or untrained K9 officer. The third major point is the improvement in officer safety for the K9 handler, with the Storm Dog system. Their training changes the concept of the K9 track mission to one of arrive, gather all the intel possible and tactically plan (like a S.W.A.T. mission) for the track.

Armed and Dangerous Suspects
The Level 1 Tactical K9 Tracking course assumes that the suspect(s) being followed is armed and dangerous and will use deadly force. Here is another paradigm shift: In all the previous tracks I have been on as a support officer, I have operated behind the K9 officer, letting the dog lead him, and him lead me. Therefore, what we have been doing in the old methodology is to allow the K9 officer to enter a potential deadly force situation with a less-lethal force option as their first response. Another problem with the old method, besides handler/dog safety, is the K9 handler needs to be focused on the dog, reading and leading the dog every step of the way. The handler shouldn’t be wielding their handgun during the track if they actually expect to apprehend a suspect on an open area search—there is too much distraction with concern for weapons operation, especially if the handler is leading the way using a pistol-mounted weapons light as primary illumination. The paradigm shift then is to allow deadly force to be the lead, in a potential deadly force tracking situation. Storm Dog teaches tactical tracking-team formations that not only facilitate officer safety, but enhance the effectiveness.

The primary formation used is a “Y” formation: a right and left flanking/point officer ahead of the K9 handler and behind the dog. These officers stay on either side of the dog’s leash line. In this position they are not in danger of being bitten or interfering with the track as they are not ahead of the dog. The flankers are providing two functions as Level 1 trained trackers: Their long arms protect the K9 and handler (much better than a K9 officer trying to shoot a handgun while controlling the dog, or having a backup officer shoot over the K9 officer’s shoulder while on a narrow trail) and they also are watching the track. The flanking officers are also responsible for watching for the human trail signs, which are covered in depth during the class, and helping to make sure that along with the handler that the dog is on the proper track. Other officers on the team are positioned as part of the “Y” in covering the lead tracking positions in close overwatch, also with long guns and controlling the overall search. The Level 1 course is four days and covers day and night tracking and search operations.

Working With a K9 Partner
The Level 1 course forms the foundation for the development of a K9 or non-K9 tracking team. It is the Level 2 course that integrates the K9 into the overall concept—and increases the effectiveness of the dog in outdoor search apprehensions by an estimated 80%. This is a three-day, seminar for level 1 graduated K9 handlers, S.W.A.T. officers, patrol and/or back-up officers. It is not a stand-alone class. Non-K9 officers can learn the command and control considerations and operations for a search team, and learn much more about K9 capabilities (once the handler has been trained). After a review of Level 1, the Level 2 course moves on by setting up a simulated high risk K9 deployment operation. The scenarios cover multiple K9/S.W.A.T. deployment locations for the same operation, command and control considerations, communications and K9 distractions. These scenarios are set up in urban and rural settings, during day and night conditions regardless of weather.

Proof of Concept
The general vicinity of the “last seen” area was pointed out. Rockefeller waited in his “hide” with a bite sleeve. The team was first set up as one would set up a stack for a dynamic entry or hostage rescue. Each officer had their assigned position, and the team leader, flanking and overwatch positions rotated each time. With the team, I tracked through four different K9 handlers and their dogs. Each track was at least a quarter mile in length over the roughest of terrain. The flanking officers worked the track with the K9, crossing over as needed to pick up a lost track and redirect the dog.

The results? Out of six tracks, there were six direct apprehensions in six different areas with bites on the “suspect” as the reward in all six cases. Pennington tells me that in previous training sessions using the old standard method of tracking, the practice apprehension rate was barely 20%. For more visit www.stormdogtraining.com. 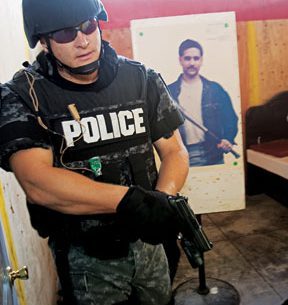 I have been involved in numerous searches to capture fleeing or escaped suspects, with…