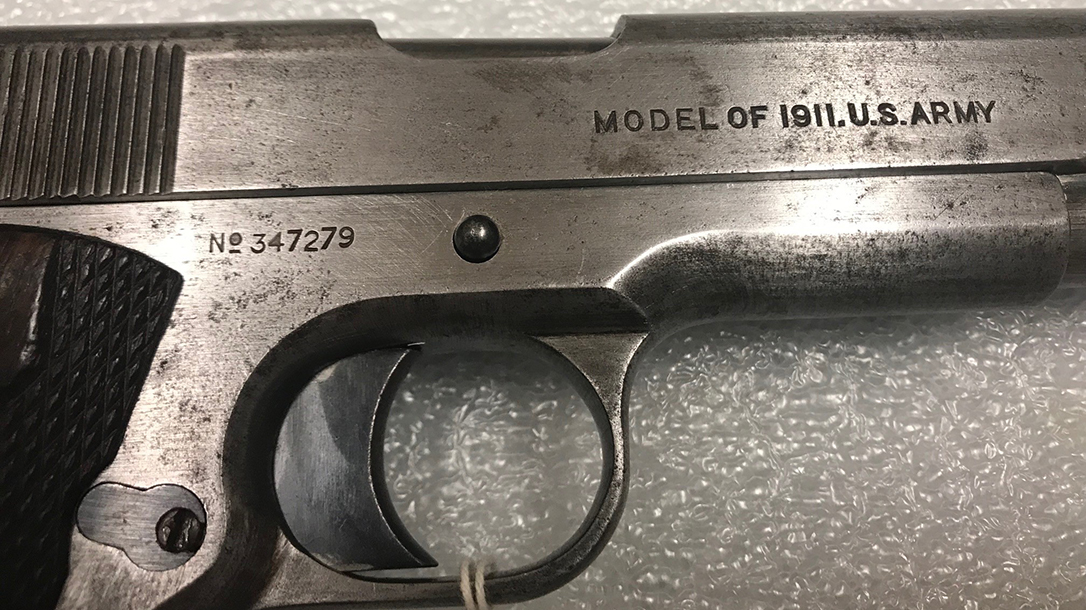 1 of 6
Photo by Mark Oliva
Colt M-1911
The Colt M-1911 .45-caliber handgun belonged to Sgt. Albert Taubert, awarded the Navy Cross first for capturing a German machine gun and crew in Work War I and again for actions in Haiti, in which he used this Colt to kill a bandit leader. 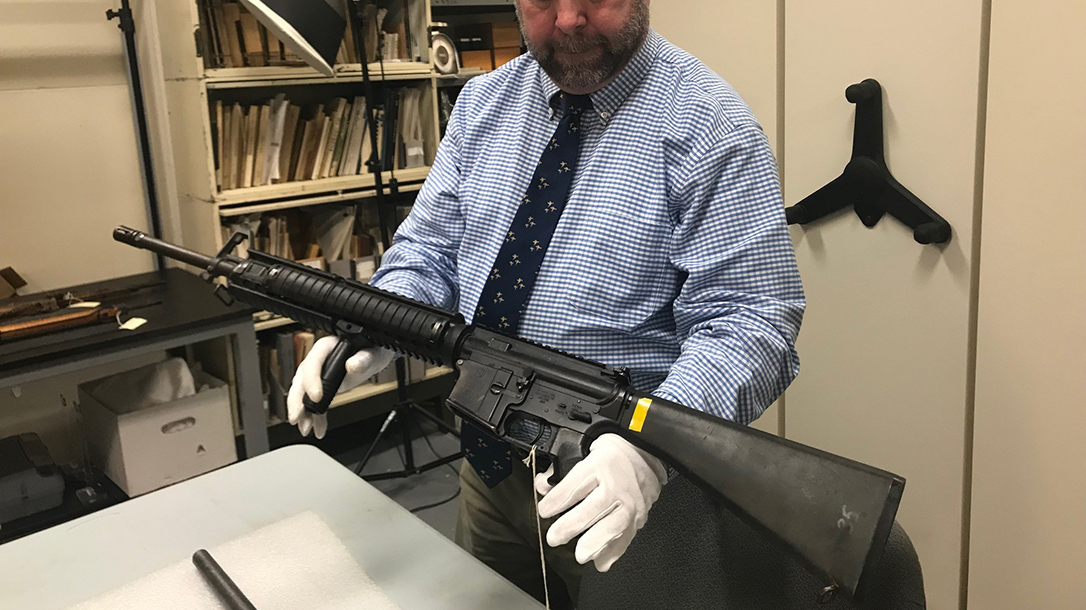 2 of 6
Photo by Mark Oliva
M-16A4 by FN America
Al Houde, Senior Curator of Arms and Armor for the National Museum of the Marine Corps, holds the M-16A4 belonging to Sgt. Rafael Peralta when he sacrificed his life to save his Marines in Fallujah, Iraq, in 2004, for which he was posthumously awarded the Navy Cross. 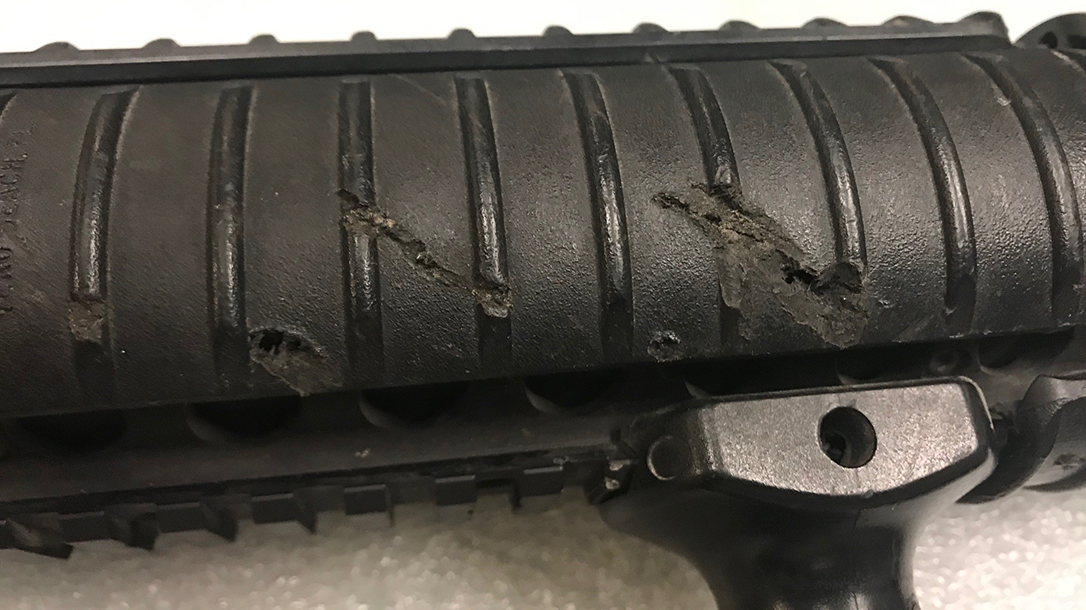 3 of 6
Photo by Mark Oliva
M-16A4 by FN America
The M-16A4 belonging to Sgt. Rafael Peralta shows the scars of the moment he sacrificed his life to save his Marines in Fallujah, Iraq, in 2004. 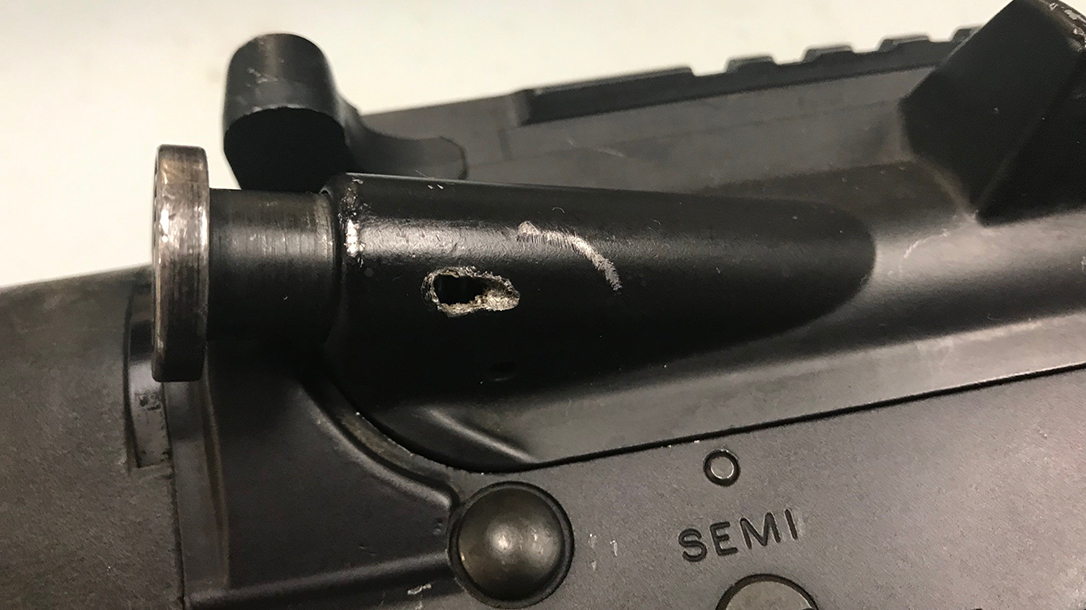 4 of 6
Photo by Mark Oliva
M-16A4 by FN America
Another look at the rifle belonging to Sgt. Rafael Peralta. 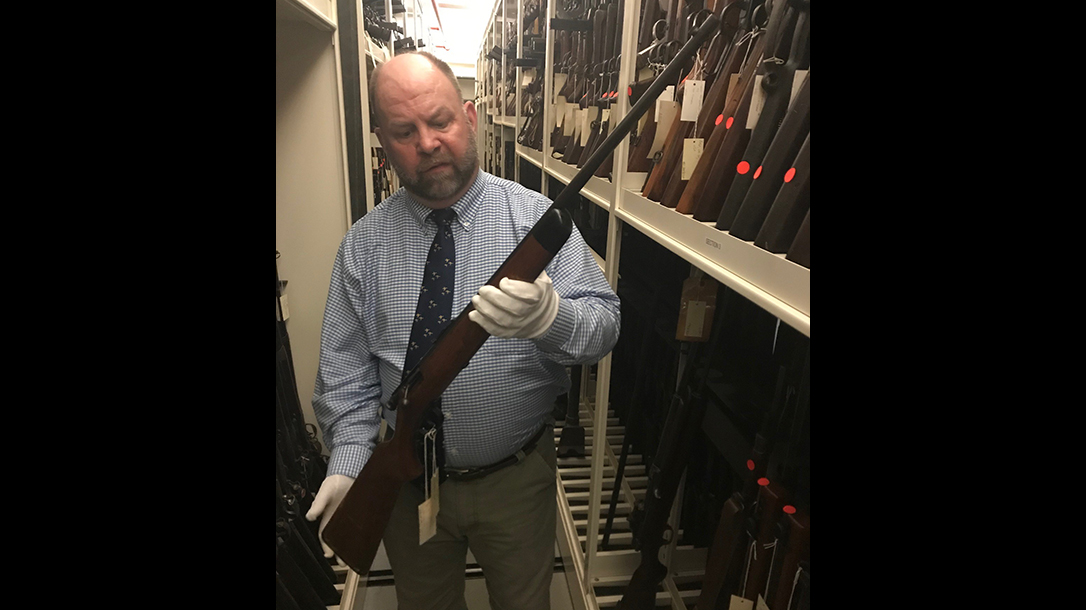 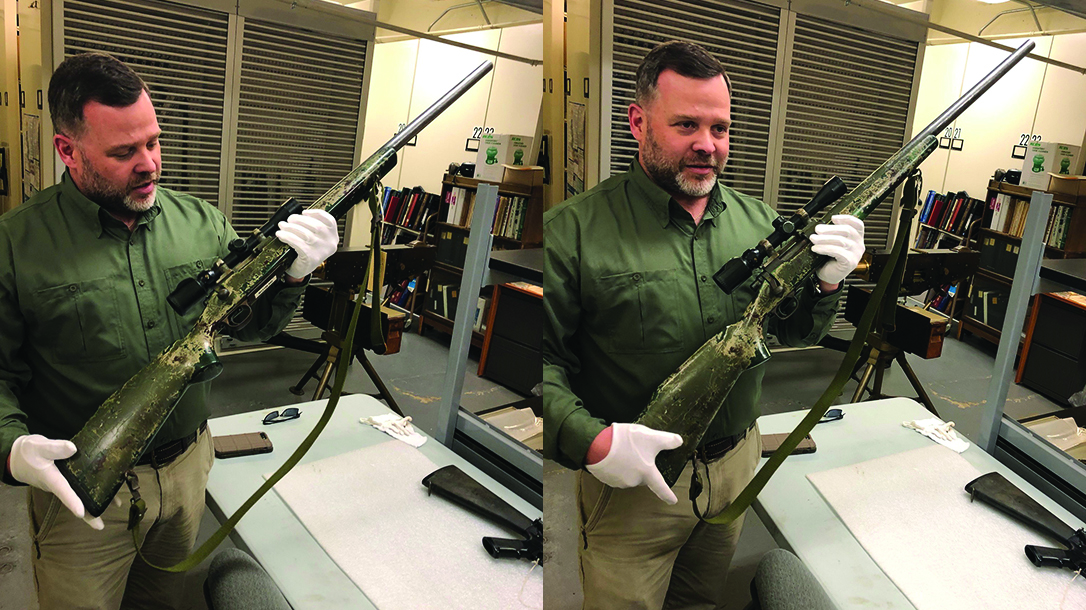 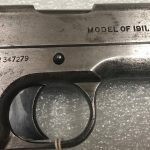 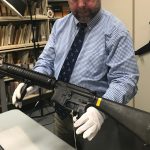 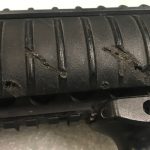 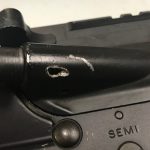 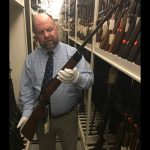 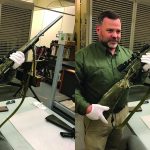 Memorial Day holds special meaning to the firearms industry. Like nearly all Americans, we pause to remember and honor those whose sacrificed their lives defending our freedoms. For firearms manufacturers, the small arms the fallen carried into battle remind us of the unique connection of those in uniform and our industry. 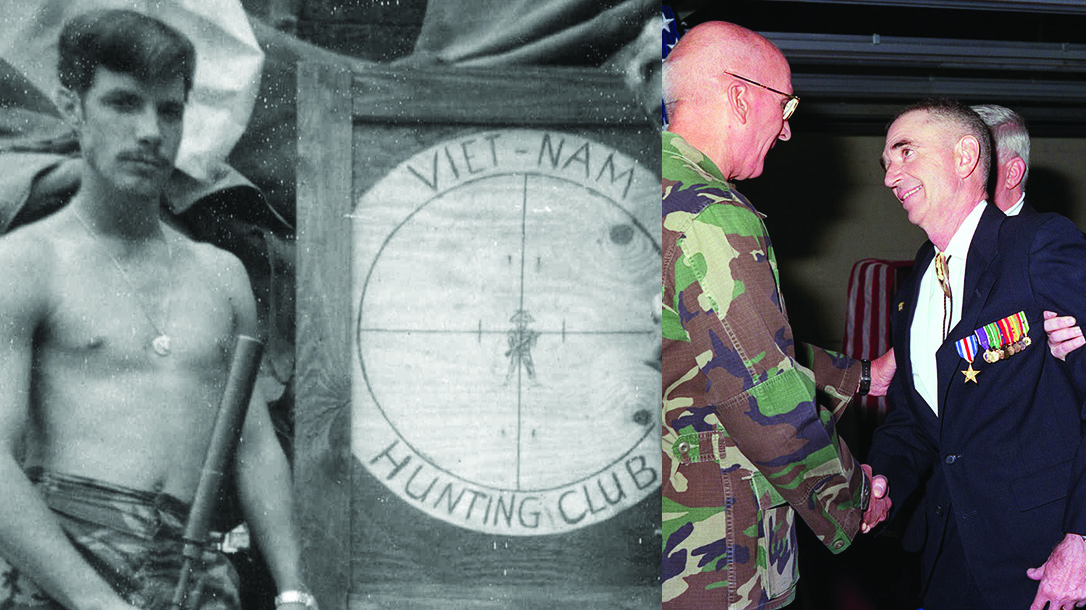 There is a collection of these firearms that has special meaning to Marines tucked away in a nondescript brick building at Marine Corps Base Quantico. Behind a locked door, in “the vault,” is what could be a priceless collection of the Marine Corps’ small arms, including what is believed to be a prototype of Henry Maxim’s machine gun. Most precious, though, are firearms carried by fallen heroes during their final acts of bravery.

“The vault” is where I met Al Houde, Senior Curator of Arms and Armor for the National Museum of the Marine Corps. Among the collection he shared is a Colt handgun. It’s marked Model of 1911, U.S. Army. Despite that, Marine Sgt. Albert Taubert carried and used it.

Sgt. Taubert was awarded the Navy Cross twice, the nation’s second-highest valor award. He was recognized first for actions in World War I when in 1918 as a private he captured a German machine gun and crew. He was again awarded the Navy Cross for actions in Haiti in 1920, when he attacked and killed Haitian bandit leader Benoit de Batraville. Taubert recovered the bandit leader’s .38-caliber revolver and holster, damaged from one of the rounds fired from Taubert’s .45-caliber M-1911.

Both are now in the Marine Corps Museum’s collection.

Houde also brought me closer to my own combat tours. He showed me the M-16A4 carried by Marine Sgt. Rafael Peralta, who was posthumously awarded the Navy Cross for actions during the Battle of Fallujah, Iraq. On Nov. 15, 2004, Sgt. Peralta was clearing houses when he was shot. Mortally wounded as the fighting continued, an enemy grenade landed in the room and Sgt. Peralta pulled the grenade to his body, absorbing the blast and saving the lives of the Marines in the room with him.

Peralta was nominated for the Medal of Honor, but was awarded the Navy Cross. They also named a ship in his honor. In the gallery above, though, was the rifle he carried made by FN America at its plant in Columbia, S.C. It bears the marks of the blast that took his life.

Seeing Sgt. Peralta’s rifle this closely robs you of words. I learn that I’m not the only one. Houde said Marines and their families often linger at the museum firearms, knowing how personal that connection is for those who fought and died in war.

Houde said some firearms are lost to time. Legendary Marine sniper Gunnery Sgt. Carlos Hathcock carried a Winchester Model 70 .30-06 during his first Vietnam tour and a Remington 700 during his second tour. There is no record of Gunnery Sgt. Hathcock’s Winchester and his Remington burned up when his armored vehicle struck a mine. Hathcock suffered burns and wounds in that incident that nearly took his life and ultimately ended his service. Hathcock died in 1999 at 56 years old.

But Houde does have one Hathcock rifle. It’s a Stevens .22-caliber bolt-action rifle. Hathcock was an avid hunter, who learned to shoot with a World War II Mauser rifle and used a J.C. Higgins .22-caliber to hunt and feed his family as a child in Arkansas.

Lost too was the team’s M-40A1 Remington 700. I was in Ramadi that day. I was also in Iraq on a subsequent tour when another Marine sniper team recovered the rifle. Two years after and about 20 miles from where the rifle went missing, Marine snipers observed a suspicious man on a cell phone and the profile of a rifle barrel in a car. They killed the insurgents and opened the car door to find the distinctive Marine sniper rifle.

I held the rifle in 2006, days after it was recovered. I held it again 13 years later. Like then, the words escaped me. This rifle will soon go on display at the National Museum of the Marine Corps to share this story.  But inside this vault, surrounded by the firearms of generations of Marines, I held the legacy of freedom forged by the firearms industry in Ilion, N.Y., and carried into war by Marines who will never leave my memory.

This Memorial Day I’ll pause to remember those who gave their lives in defense of our nation. I’ll visit graves of lost friends at Arlington National Cemetery. I’ll also look forward to when these firearms will be on display at the museum, illustrating the stories of these Marines, their sacrifice and their valor.

Mark Oliva is Director of Public Affairs for the National Shooting Sports Foundation, the trade association for the firearms and ammunition industries. He is a retired Marine Master Gunnery Sergeant with 25 years of service, including tours in Iraq, Afghanistan, Haiti, Albania, and Zaire. 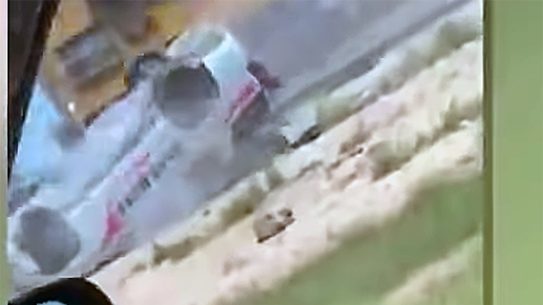 Two Midland Sheriff's Deputies are lucky to be alive after taking a direct hit...