by Darryl Bolke
in Military & Police
0

0
SHARES
100
VIEWS
Share on FacebookShare on Twitter
Centurion Arms’ MK 12K variant is geared towards law enforcement use. Its versatility allows for it to be re-configured from a sniper system to being suitable for entry work with an optics change to an Aimpoint Micro T1 optic from its normal magnified precision rifle optic.

In today’s battlefield and on the streets of urban America, the role and type of traditional sniper rifles has changed drastically over the last several years. Whereas bolt-action 7.62×51 sniper systems dominated before, in today’s fast-paced engagements with a different type of enemy, the platform of the sniper rifle has taken two paths. Long-range precision sniper rifles have become large, specialized systems that are chambered in cartridges like .338 Lapua Magnum, or .50 BMG. To fill the role of providing highly accurate fire in shorter-range combat environments, the precision 5.56mm AR-15/M16 based system is becoming a dominant force in the hands of designated marksmen, an indigenous member of the small infantry unit. Considerations of collateral damage as well have shown a greater need for pinpoint accuracy, with a less-powerful round, at closer engagement ranges.

The 5.56mm precision rifle used by special operations snipers in both Iraq and Afghanistan is the MK 12 Mod 1 Special Purpose Rifle. It is a culmination of many years of development, and has proven a success in the field. The program itself grew out of developments at the Naval Special Warfare Center, Crane Division, for use by Navy SEALs. These guns are also in use by U.S. Army Special Operations soldiers. Limited numbers are reportedly in use within the USMC. 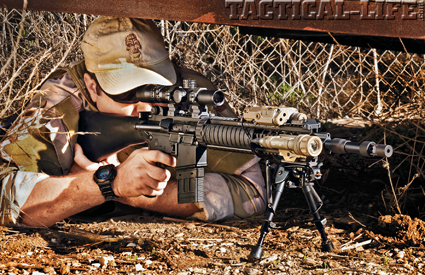 The MK 12 system has several variations, but the heart of the system is that of an M16 with a free-floating 18-inch match barrel that utilizes the OPS Inc. suppressor and matching muzzle brake and alignment collar. They have been built at Crane with either fixed A1 or A2 stocks, and some have been field modified by being put on collapsible-stock lower receivers with SOPMOD stocks. They have utilized various mid-range variable scopes from Leupold, and the current NightForce 2.5-10X optic. The current rifles use a Knight’s Armament fore-end with backup sights and trigger. They are also fitted with Harris bipods. The Knights rail system allows for numerous laser, white light and night vision devices to be utilized. 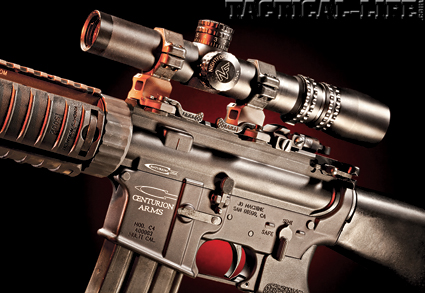 The NightForce 2.5-10X scope is a near perfect optic for the MK 12 and how it is used in typical Sandbox deployments.