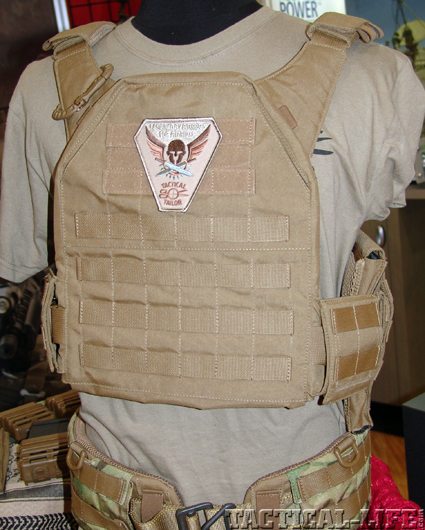 The 31st Modern Day Marine Exposition held at MCB Quantico was a combination of events and displays for the latest weapons, equipment and support systems made by American and international manufacturers—all designed, as Marine Lt. Gen. Richard P. Mills said during the opening ceremonies, “to look for adaptive ways to get the right equipment to the most lethal fighting force ever seen.”

Responding to feedback from Marines in combat, manufacturers showed products and services that would make Leathernecks faster, lighter and stronger warriors. Once again, Lt. Gen. Mills summed it up perfectly: “Victory on the battlefield is the ultimate goal of each and every one of us. We will continue to scare the hell out of our enemies.”

Here are some of the outstanding and forward-thinking products noted at the expo, and be sure to check out the January 2011 issue of Tactical Weapons for more coverage.

Tactical Tailor Plate Carrier (above)
Designed with front, back and side pockets for ballistic armor with channels for water tubes and communications, the new Tactical Tailor plate carrier is made for exertive use while providing full center of mass coverage. The flame resistant carrier is made for easy (and less effort) doning and doffing from the side because when magazines are hung from the front, getting a regular plate carrier becomes problematic. The padded nylon carrier is equipped with air channels for improved airflow for cooling. All colors will be available with an MSRP of about $285. (tacticaltailor.com; 866-984-7854) 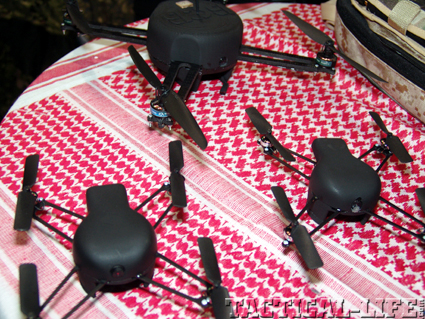 BCB International SQ-4 NUAS
The SQ-4 Nano Unmanned Aerial System (NUAS) is a near-featherweight remote controlled mini-UAV that is also capable of pre-programmed autonomous flight. At only 21 ounces, with four near-silent helicopter rotors, the NUAS can quietly hover or fly up to 400 feet at speeds up to 8 meters per second. It can even perch on objects to stare with its day or night video camera. The SQ-4 is controlled by a handheld remote control unit and provides the link for real-time video feed from the cameras as well as information such as the latitude and longitude of the vehicle, the distance between the location and the home point, and the direction to the home point. The SQ-4 has a flight endurance of about 15 minutes with a mission radius of about 1.5km. (bcbin.com; 585-615-7900) 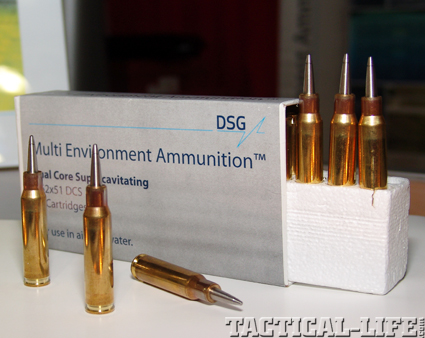 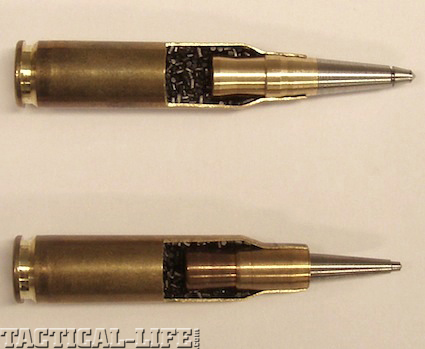 That means the specially designed and constructed bullets can hit targets submerged in water or if the shooter is underwater firing at targets above the surface. How? The bullets are specifically made to stay encapsulated in an air bubble (like some hyper-velocity torpedoes) so that the projectile never touches the water, which would normall cause fragmentation or drag and loss of accuracy. (dsg.no) 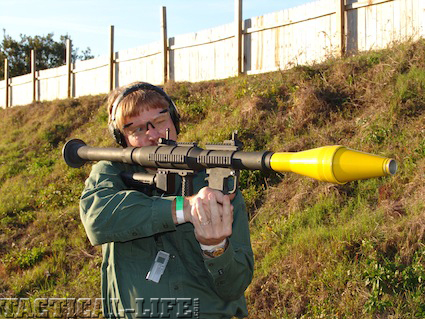 Airtronic MK 777 American RPG
More commonly seen as a “bad guy” weapon, the classic RPG is one of the most successful weapons ever made. Even though our warfighters train allied troops in its use and even deploy them while embedded with foreign forces, they have to rely on non-American manufacturers with inconsistent quality control and questionable, old or downright dangerous energetics. Airtronic USA, Inc., has been awarded a contract as the sole supplier of RPG launchers to the U.S. military. The MK 777 (taken from the unloaded weight of the American-made RPG-7, 7.77 lbs) has a 36-inch-long, carbon-composite-wrapped 40mm bore made by ATK with a life of about 250 rounds. The MK 777 has a Mil-Std-1913 upper rail for any iron or optical sight desired. Although able to use any RPG-7 projectile, Airtronic offers High Explosive/Fragmentation or High Explosive Anti-Tank (HEAT) rounds for the MK 777. (airtronic.net; 847-437-0100) 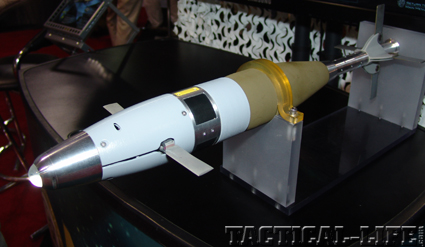 FNC PUMA
Designed to replace a barrage with a single, precisely delivered projectile, the Future Naval Capabilities (FNC) Precision Universal Mortar Attack (PUMA) can turn a mortar into a surgical strike instrument. The PUMA flight-controlled mortar is a mortar-launched “smart” projectile that can “fly” as directed by both GPS and terminal laser direction to achieve pinpoint accuracy while avoiding obstructions. The PUMA can alter its flight path centerline in all axes to achieve a non-ballistic approach and custom, target-specific attack angle to maximize its kinetic effect and minimize collateral damage. Designed for the standard M252 81mm mortar and the M821/M889 HE ammo, the PUMA has the ability to be adapted for a variety of systems. 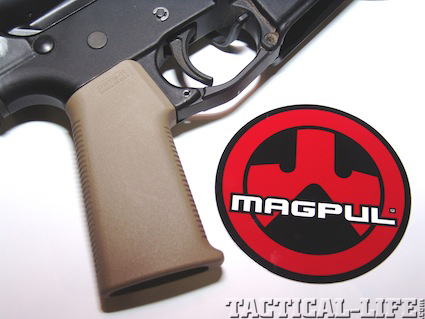 Magpul MOE+ and MOE-K
The MOE+ grip combines reinforced-polymer body construction with comfortable, wraparound rubber over-molding for maximum weapon control in adverse environments. With a similar shape to a medium-sized Magpul MIAD grip but with a soft rubber feel, the MOE+ features a hard-polymer bottom edge to reduce the possibility of equipment snags or grip damage. With a more vertical grip angle and slimmed and shortened body, the MOE-K is optimized for use on PDW (Personal Defense Weapon) configurations to bring the shooter’s hand closer to the body or armor. Both models include all mounting hardware. (magpul.com; 877-462-4785) 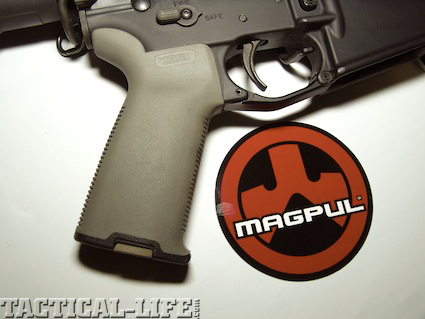 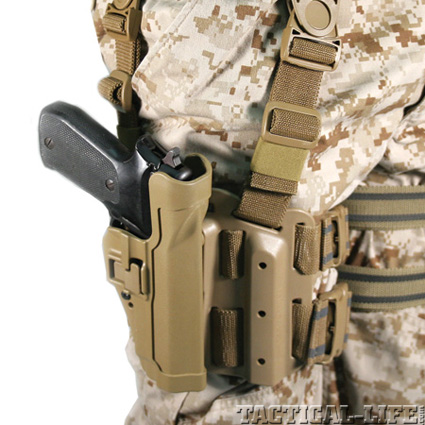 Blackhawk CQC Tactical SERPA
The BlackHawk CQC Tactical SERPA Holster has been selected by the USMC as the new holster for their M9 sidearm. The SERPA has a patented locking system with adjustable straps allowing for an individual, custom fit. The Y-harness leg straps and articulating quick-release buckles will not impede movement or bind during maneuvers. The SERPA locks instantly upon reholstering with nothing to strap, snap or rotate. Because of the modular design, the SERPA will allow Marines to carry their M9 pistols on their hips, chests or thighs depending on preference or mission. The SERPA holster has an MSRP of $132.99 (blackhawk.com; 800-694-5263) 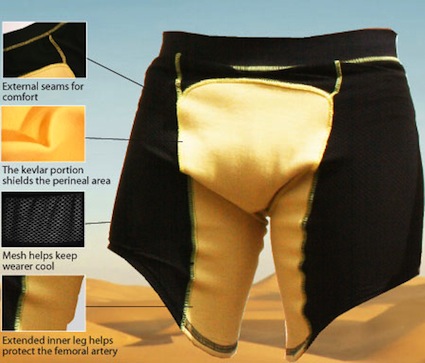 BCB International Blast Boxers
With blast injuries persisting as the primary cause of warfighter wounds and “center of mass” being increasingly protected, BCB International has designed the Blast Boxer underwear using double-layered Kevlar zones around the groin area and femoral arteries—areas that can result in death if injured without immediate specialist medical attention. Light open-structure mesh is used on the rest of the garment to help offset the weight and thermal load of the ballistic material. Designed to ensure comfort and wear plus the ability to reduce potentially fatal shrapnel wounds, Blast Boxers are sensible garments for troops. (blastboxers.com) 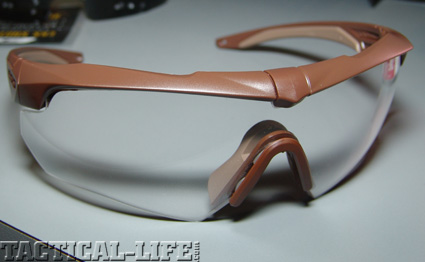 ESS Crossbow Eyeshield
The ESS Crossbow ballistic eyeshield has been selected by the USMC to protect Leatherneck eyes. The Crossbow comes in different frame and lens colors that can be easily and quickly changed using the patented DedBolt lens lock without having to apply pressure on the lens itself. Each high-impact polycarbonate lens provides 100 percent UVA/UVB protection with ClearZone FlowCoat coating that eliminates fogging during use. Each Crossbow also has available the super thin, hearing-protection-compatible Suppressor frame that allows you to wear the glasses comfortably under headsets without significantly affecting the auditory seal or producing painful behind-the-ear wear spots. (esseyepro.com; 877-726-4072)

Read more about the Modern Day Marine Expo in the upcoming issue of Tactical Weapons.