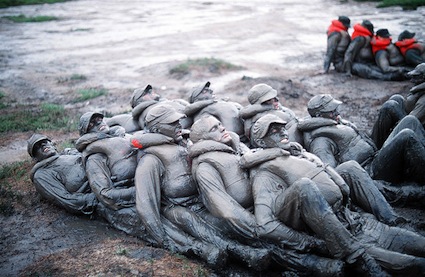 A Navy SEAL who accidentally shot himself in the head early Thursday morning in Pacific Beach died Saturday at a hospital, Navy officials said.

The Navy identified him as Petty Officer 3rd Class Gene “Geno” Clayton, Jr., 22, from Ohio. He is survived by his parents, Gene and Kimberly Clayton, of Ohio, and three sisters.

Clayton, born in Poland, Ohio, joined the Navy in March 2010 and was a special warfare operator. He completed pre-basic SEAL training at Great Lakes, Ill., in August and completed his SEAL training in Coronado in December, Navy sources said.

Police said Clayton had gone to a bar and brought a woman back to his apartment, where at least one roommate was sleeping. He was showing several guns to the woman, and when she asked him to put them away, he told her it was safe.

He put a pistol to his head, believing it was unloaded, and pulled the trigger, firing a round into his head, police said. Paramedics took Clayton to Scripps Memorial Hospital, La Jolla, where he was placed on life support.