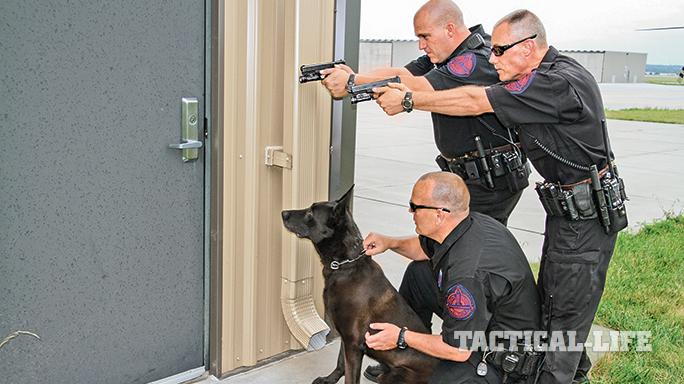 1 of 4
Great Plains Guardians: Nebraska Safety Patrol’s GLOCK 21 SF
Tactically trained to work with other troopers to clear structures and dwellings, two NSP troopers use their GLOCK 21 SF pistols to cover a K9 and his handler, before the highly trained dog is let loose to find a hiding suspect. 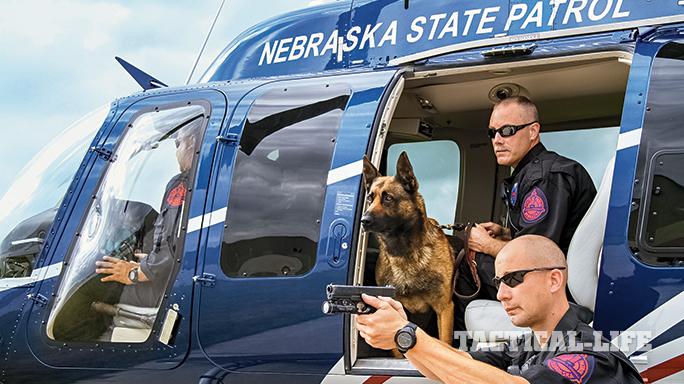 2 of 4
Great Plains Guardians: Nebraska Safety Patrol’s GLOCK 21 SF
The NSP’s K9 and Aviation Support units work together for drug enforcement, security, and search and rescue missions. The Aviation Support Division has a helicopter and several fixed-wing assets at its disposal. 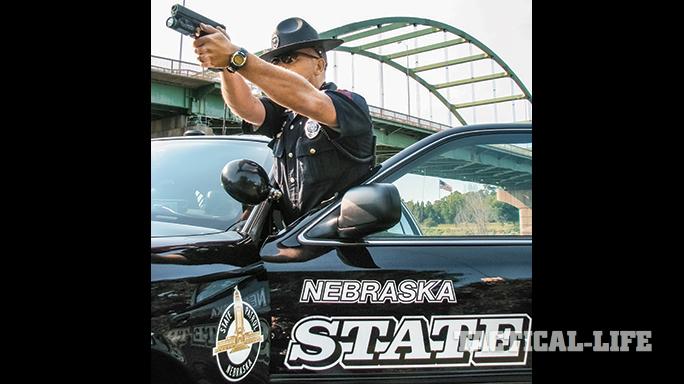 3 of 4
Great Plains Guardians: Nebraska Safety Patrol’s GLOCK 21 SF
The Nebraska State Patrol has evolved from being dedicated solely to traffic enforcement to a statewide agency ready to handle any threat. 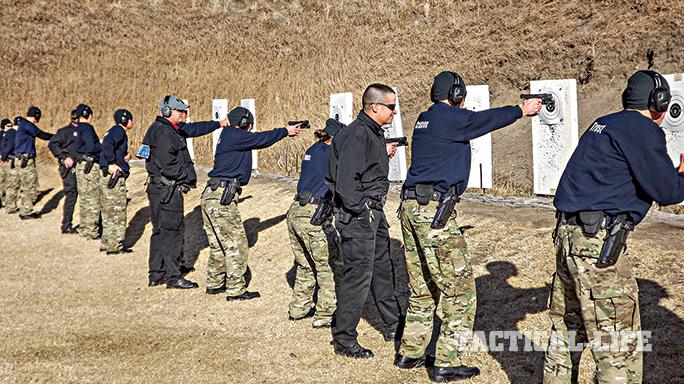 4 of 4
Great Plains Guardians: Nebraska Safety Patrol’s GLOCK 21 SF
Cadets of the Nebraska State Patrol Training Academy wring out their newly issued G21 SF .45 AUTO pistols on the range. During the 23-week course, recruits will receive over 1,000 hours of hands-on and scenario-based training. 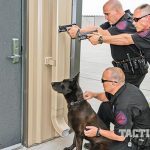 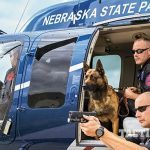 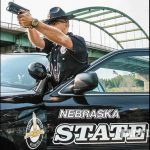 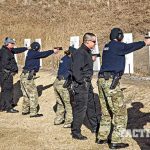 When the Nebraska Safety Patrol was established in 1937, its mission was primarily to check motorists for valid driver’s licenses who were traveling across the mostly barren, wind-swept Great Plains. That commitment to statewide law enforcement has been improved and expanded to the modern day through the highly trained and well-equipped Nebraska State Patrol (NSP). The NSP’s officers are dedicated to serving and protecting residents and visitors alike throughout Nebraska. The NSP is similar to more than two-thirds of American law enforcement agencies and organizations in its adoption of GLOCK firearms. The NSP’s troopers prefer the powerful GLOCK 21 SF .45 AUTO pistol to protect themselves and the state’s citizens from threats of deadly force.

The motto of the NSP is “Pro Bono Publico” which is Latin for “For the good of the public.” The NSP holds this as the standard that its strives to meet every day while providing the citizens and visitors of Nebraska professional law enforcement services. Unlike its predecessor, which focused solely on regulation of local and interstate commerce, the NSP is now equally adept at all law enforcement tasks, such as working with local communities to improve public safety, the regulation of traffic laws and interstate commerce, investigating state crimes and helping municipalities investigate crimes in their jurisdictions, and even responding to high-risk events requiring the deployment of the NSP’s SWAT teams.

The NSP has more than 700 sworn troopers and civilian personnel who are divided into six districts, including the headquarters in Lincoln, Troop A in Omaha, Troop B in Norfolk, Troop C in Grand Island, Troop D in North Platte and Troop E in Scottsbluff. The NSP has three primary divisions: Administrative Services, Investigative Services and Field Services.

The Traffic Enforcement division consists of about 200 troopers that are responsible for more than 10,000 miles of roads in Nebraska, which is the primary function of the Field Services division. The Aviation Support Division consists of a helicopter and several fixed-wing aircraft for drug enforcement, security, rescue missions, investigative photography, transportation, surveillance and traffic enforcement.

The Nebraska State Patrol Training Academy conducts both the basic recruit camp and in-service training. The NSP runs its own 23-week, in-resident training academy where recruits undergo more than 1,000 hours of instruction including hands-on and scenario-based training.

All of the NSP’s troopers rely on the G21 SF .45 AUTO, which provides them with the ability to stop the dangerous and unexpected threats they might encounter as first responders. With the high numbers of sworn officers being assaulted, attacked or shot, law enforcement agencies realize that any officer arriving at any scene needs to be able to immediately overcome all threats that they might encounter.

One issue that threatens the NSP trooper’s operations and their equipment is the almost constant wind across the Great Plains. While a breeze may be cooling and very appreciated, the unrelenting nature of the heavy winds that cut through Nebraska, turning it into a “wind corridor,” affects everything that happens outside. During the harsh winters, when the biting winds are filled with sleet and snow, or during the very hot and humid summer months when dust storms fill every nook and cranny with grit, troopers and their equipment face a challenging environment in which to function properly. As a result, all of the important equipment that the NSP uses, including its firearms, has to be able to withstand this unfriendly environment and still operate. That requires the NSP to have a reliable sidearm, which means having a tough pistol, and that means a GLOCK. The NSP has learned through decades of experience that, if needed, their GLOCK pistols will fire without fail.

Captain Mark Williams of the NSP noted, “The Nebraska State Patrol is both the state patrol and criminal investigative agency rolled into one. We have about 730 personnel with about 483 sworn troopers, which is large for us considering Nebraska is a rural state with only about 1.7 million residents.”

When asked about the choice of GLOCKs for the NSP, Captain Williams said, “In 1991 our troopers had the choice of either the  G22 or G23.40s or the G21.45 AUTO, so we used both calibers for over a decade. Then, a few years ago, we decided to go to a uniform sidearm and selected the G21 SF .45 AUTO. The standardization was done primarily for officer safety so any trooper can pick up their partner’s pistol or magazine and stay in the action.

“Although we liked the speed and power of the .40, we decided on the  GLOCK 21 Short Frame .45 AUTO pistol primarily because it is the best of both worlds, where the SF frame is a good fit for all of our troopers and you still have the stopping power of the pistol’s .45 AUTO chambering.”

Sergeant Dana Korell is an NSP investigator and a GLOCK-trained armorer. “In 1991 we transitioned from revolvers to the G21, G22 and G23 pistols, with about half of the troopers selecting the G21. I talked several of the officers, including some the female troopers, into trying the G21 SF, and their shooting scores on the range actually improved.”

Sergeant Korell went on about his experience with GLOCK pistols, saying, “I was one of the first to attend the GLOCK Armorer’s Course and have worked on the Nebraska State Patrol GLOCK pistols since 1991. Without a doubt, the GLOCK is pretty simple. I know that every time I pick one up it will go bang when I need it to, no matter what.”

When asked why he prefers to work on GLOCK pistols, Korell responded, “You don’t have to spend money on it to make it reliable. If you want to change out parts, since the design is modular, you just take out the part and put the new one in with no filing or fitting. As an armorer, it is easy because I know if I work on one, I probably will never see it again.”

Every NSP trooper knows that the next call or the next traffic stop is a complete unknown. They also know that they will face that situation potentially alone and with just their GLOCK for protection. That means their pistol has to perform without fail and immediately stop any kind of threat with authority. Between their training, dedication and G21 SF .45 AUTO, each Nebraska State Patrol trooper has justifiable confidence that they will prevail when the situation suddenly calls on them to protect themselves or other innocent lives from a deadly threat. 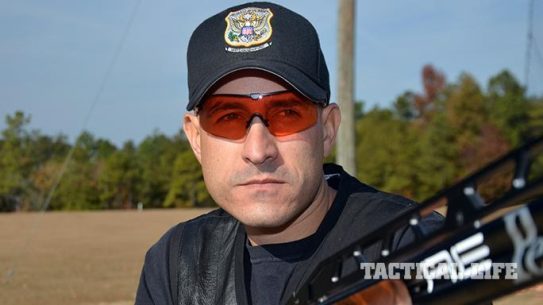