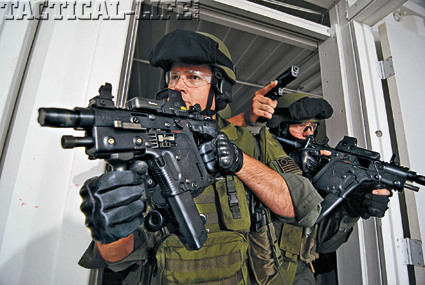 Glocks in .45 ACP and the KRISS SMGs and carbines can all share the same Glock 21 and KRISS MagEx magazines.

Buckeye, Arizona, is a community in the Phoenix metropolitan area that is home to approximately 53,000 residents. It covers 680 square miles and is located in Maricopa County, 35 miles west of Phoenix and 115 miles north of the Mexican border. The local economy has suffered from the same malaise that affects most areas of the country: housing foreclosures have forced some residents to leave the county, while at the same time, an influx of new residents from other areas has also brought in a criminal element.

Wild West Crime
“We’ve seen certain crimes such as home invasion and carjacking performed by juveniles who have arrived here from places as far away as California, in addition to crimes committed by local juveniles,” Sergeant Mike Haddad, Team Leader of the Buckeye Police Department S.W.A.T. team told me. “In some of the home invasions, they ring the doorbell, and if there’s no answer, they think the house is unoccupied and kick the door in. Sometimes the homeowner is upstairs, didn’t hear the doorbell, but heard the door being kicked in, and they rush downstairs. That’s when it gets ugly.”

Buckeye, like any other town on the outskirts of a large metropolitan area, also sees its share of bank robberies, homicides, assaults, suicidal subjects, vehicle thefts and crimes involving narcotics. Certainly, with two major highways running through Buckeye (Interstate 10 running east/west and State Highway 85 running north from the Mexico border), the department not only has to contend with the usual enforcement duties on those highways, but also with illegal aliens and drug trafficking. 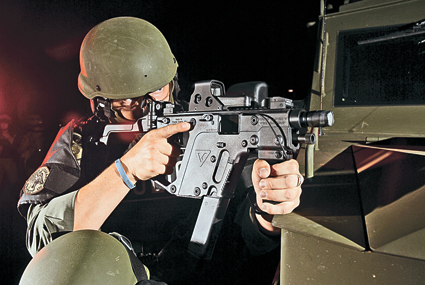 The KRISS SMG is short and balances well between the fore and aft grips. Its size makes it very easy to shoot and deploy. 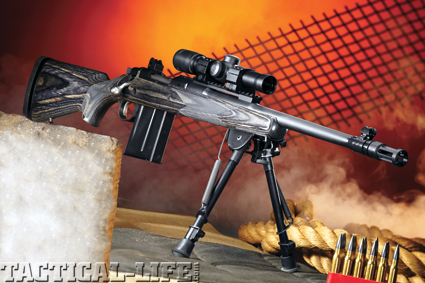 Glocks in .45 ACP and the KRISS SMGs and carbines can all share the…