How the Ocean View Police Sets the Standard for Small Departments

Chief McLaughlin, far right, participates in the same training as his personnel.

The following article on the Ocean View Police Department was originally published in October/November 2016 issue of “Guns & Weapons for Law Enforcement” magazine.

A big city police department recently made news when the patrolman’s union noted that in a time of mass murders and constantly threatened terror attacks, their officers for the most part only had pistols, and no long guns in most patrol cars. 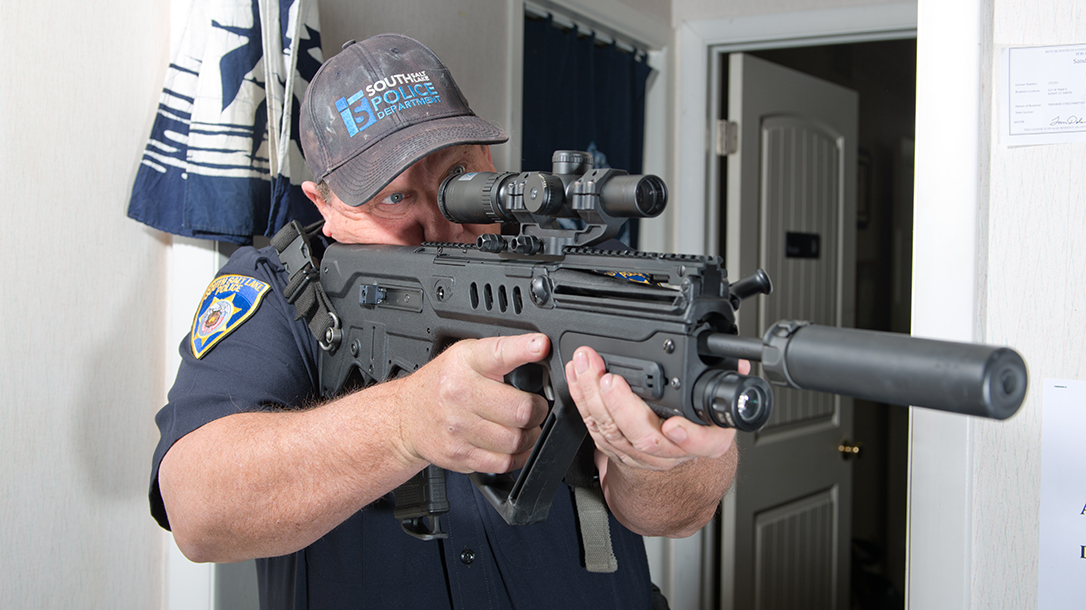 Their request for better armament largely fell on deaf ears. One expert was quoted as saying that the cops in that city had “heart.” All they needed was heart. And their 9mm pistols.

This underscores an advantage for smaller police departments, where those who hold the budget strings may find it more affordable to properly equip and train their law enforcement personnel. Let’s take a look at the Ocean View, Delaware, Police Department.

The Ocean View Police Department serves a waterfront resort community of 2,000 permanent residents. The population swells fivefold to as much as 10,000 during vacation season.

The agency has only nine full-time sworn officers. But what the organization lacks in manpower it makes up for with constant high-level training and careful planning. This of course encompasses issuing the best possible equipment.

Each officer is assigned a personal, “take home” patrol vehicle and state-of-the-art communications gear. This allows command to “assemble the troops” quickly in times of crisis.

Every officer is issued both a patrol rifle and a patrol shotgun: a 5.56mm LWRCI carbine and 12-gauge Mossberg 500. The standard sidearm is the Glock 37 in .45 GAP, and there is a story there. Back in 2009, when it was determined that the department’s .40-caliber Glock 23 pistols were due for replacement, Chief Kenneth McLaughlin brought in a local distributor who allowed all of the officers to test a variety of pistols in assorted calibers. “Every officer fired each of the guns. We took a poll and narrowed it down to the top three, and the G37 made that list for all officers. Then we narrowed it down to the two favorites, and the G37 was still on everyone’s list. It came down to that gun and the 9mm Glock 19. The majority of the officers chose the Glock 37.”

The Glock 37 in .45 GAP did not catch on very well with America’s police. This was in part because of a perception that it was “an ingenious solution to a nonexistent problem.” But Chief McLaughlin disagreed: He felt it gave a very controllable yet powerful pistol to officers with small and large hands alike. Ballistic tests monitored by the department showed excellent tactical penetration. Feedback from larger departments that have had multiple shootings with that gun using Speer’s 200-grain Gold Dot JHP ammo confirmed decisive stopping power in the field. There were no horror stories of suspects taking bullet after center-mass bullet before going down.

“We’ve had no problem keeping .45 GAP ammo in stock, both duty loads and training ammo and even the frangible loads required when we train at the Delaware State Police indoor range,” the chief said. 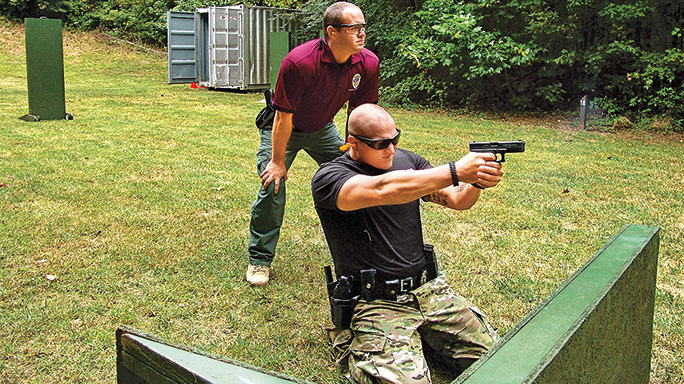 Even the best hardware is useless without the best training in deploying it. Every single Ocean View police officer is put through Glock’s one-day armorer’s school. By hosting a Glock armorer’s course every year, the department has saved the community the price of tuition by using the host agency’s “free slots” in these classes. The result is deep familiarity and confidence in the duty sidearm. It would be unimaginable to suggest that a department like the NYPD—with tens of thousands of Glocks on the streets in the hands and holsters of its sworn personnel—certify every officer as a basic armorer. In a department the size of the OVPD, however, it is absolutely possible.

This department is also active with the International Association of Law Enforcement Firearms Instructors (IALEFI). It regularly sends its personnel to their seminars to bring lifesaving lessons back to the community they serve.

The state of Delaware requires that officers qualify three times a year. At least one of those must be at night. But the Ocean View PD does it four times a year. It also supplements those qualification runs with many more training days. Those training days involve live-fire tactical work with all of the department’s weapons, including off-duty and backup guns.

The Ocean View Police Department has long taught first responder tactics for stopping active killers. It was an early adopter of training emergency medical personnel to work in tandem with responding armed officers. All officers are trained to National Tactical Officers Association (NTOA) protocols for responding to such incidents. Indeed, every single officer is trained to instructor level in that discipline. Moreover, the department is on board with the Advanced Law Enforcement Rapid Response Training (ALERRT) program.

Chief McLaughlin said, “We don’t have a county police department here, and while we can call in Delaware State Police SWAT for predictable high-risk scenarios, there is no immediate SWAT response readily available for a sudden, fast-breaking emergency. We’re on our own for that. This is why our officers are all trained and equipped as they are, and it is one reason we have a designated precision rifle shooter with a custom Remington 700 .308 from Iron Brigade Armory.”

Before I got to talk to Chief Ken McLaughlin, a couple of his officers told me about him. “My boss is a working chief,” one told me. “When he can get away from the admin stuff, he’s out there patrolling with us, and when there’s a hot call, he’s there on the scene with us.”

Another officer said, “You have to talk to our chief. He’s all about training.”

When I did get to spend time talking with him, I was impressed. A longtime career cop whose heart is still on the streets of the community he serves, Chief McLaughlin spent several years on the Patrol Committee of the International Association of Chiefs of Police (IACP). He recently became a member of the Patrol Committee of the NTOA. There, he will join the legendary retired police chief and master officer-survival instructor Jeff Chudwin. I’ve quoted Chudwain’s wise advice here in the past and doubtless will again.

This article was originally published in October/November 2016 issue of “Guns & Weapons for Law Enforcement” magazine. For more information, visit outdoorgroupstore.com.