0
SHARES
476
VIEWS
Share on FacebookShare on Twitter
The largest city in Pennsylvania, Philadelphia has a population of over 1.5 million people in its 142 square miles on the banks of the Delaware River. From the city’s historic “Center” with Independence Hall, to its great “Northeast,” Philadelphia hosts four sports arenas, an international airport and one of the largest in-land ports in the nation.

The city lies about 80 miles from New York City and about 100 miles from Washington, DC, making it a central hub in a very high-volume corridor. It was at the center of Revolutionary America that saw the announcement of the Declaration of Independence as well as the formation of the Constitution. Philadelphia, a city of firsts, was also the first city in the nation to develop a SWAT-type unit.

In 1964, Philadelphia experienced a rash of bank robberies. To answer that threat, the Philadelphia Police Department established a 100-man Special Weapons and Tactics (SWAT) squad. The purpose of this squad was to react quickly and decisively to the bank robberies while they were in progress by utilizing specially trained officers who had superior firepower.

Captain Steven Cross is the commanding officer of the Philadelphia SWAT unit. The captain has over 30 years with the department and has been with the unit for the last eight years. Suffice it to say that he has a lifetime of policing experience.

According to Captain Cross, “Entry onto the SWAT team requires an officer to pass a multi-step process. An officer must have served in the department for five years and earned points with a good service record. The officer must request to be assigned to the unit and get their command nomination. Then they are scheduled for an interview with serving SWAT supervisors. If they get through the interview, they are brought back for a shooting proficiency and physical fitness test. If they pass all that, we bring them in for the SWAT Basic School.”

Tactical work requires certain skill sets and any officer assigned to the unit must be in excellent physical condition to handle the strain of the unit’s work. Philadelphia SWAT’s basic school is a grueling seven-week process where an officer learns everything from basic tactical teamwork to serving high-risk warrants, marksmanship with the weapons inherent to the team and working in large tactical operations with other non-Philadelphia teams. Due to the trains, airport and seaport, the unit also trains for unconventional environments.

Philadelphia SWAT has over 50 officers assigned who cover the city 24/7. At a moment’s notice, they can be mobilized and respond to anywhere in the city and cover a situation. They often work with outside agencies, including the U.S. Marshals Service for fugitive apprehension. 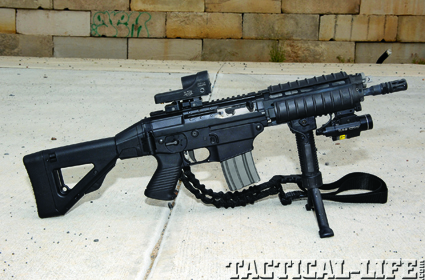 Each operator is trained to make entries and be the shooter in dynamic, hostage and non-dynamic situations. They train constantly and perfect tactics for every environment in the city, from Independence Hall to the airport.

Several members are trained as countersnipers to handle long-distance threats and provide cover for the operators on the set. These officers provide a critical tactical operational link and serve as the “overwatch” for the responding team during an officer-down situation. Some officers are also trained to work cameras, robots, and other tools that allow the team to gather important intelligence prior to any operation.

The main weapon of choice for these operators is the Bushmaster Quad Rail Patrolman’s Carbine in 5.56mm NATO. A proven, accurate and effective weapon, the Bushmaster offers the power of a 5.56mm round with the maneuverability of a short carbine, which is a good choice for law enforcement operations due its shorter plat­­­­­­­­form. The 5.56mm round also limits problems regarding over-penetration. This weapon system is versatile enough to address a threat in any environment. 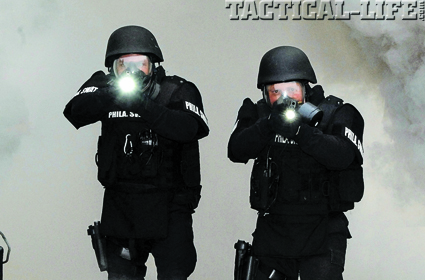 In low light, the unit is equipped with night-vision monocles, similar to the military, so they can surprise a suspect with speed and dynamic action.”

The unit also has the choice of using the Sig Sauer SIG556 Classic firing a 5.56mm round, with a shorter barrel, offering a more compact platform to work with. This weapon gives the unit another 5.56mm weapon choice.
As a backup, each operator carries the Glock 35 in .40 S&W. In Philadelphia, only the SWAT unit carries the G35, which is highly regarded in the law enforcement world. The G35 is the .40-caliber version of the Glock 34. 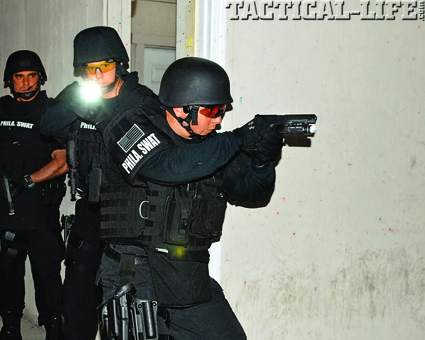 Philadelphia SWAT never leaves base without its Benelli M4 Super 90 12-gauge shotgun. The Super 90 is a semi-automatic shotgun that is the first gas-operated shotgun produced by Benelli. Its uses the “auto-regulating gas-op­erated” (ARGO) system using two stainless steel, self-cleaning pistons located just ahead of the chamber to function opposite the rotating bolt, thereby eliminating the need for the complex mechanisms found on other gas-actuated automatics. It also has an adjustable ghost-ring rear sight, Picatinny sight rail on top and a military-style fixed-blade front sight or adjustable rifle sights with a pistol grip for staying on target.

For CQB types of work, Philadelphia SWAT counts on the HK MP5A3 in 9mm. Proven and reliable, the MP5A3 is capable of fully automatic and semi-automatic fire, and it’s one of the most prolific CQB weapon systems. For a close-in threat situation in an apartment building, it makes sense to have this option.

The countersnipers use .308 Remington 700 rifles, giving them the ability to extend their “coverage” of the team. This is especially important when a hostile threat is in a tight spot and the only one that can subdue the threat is the countersniper.

All of Philadelphia SWAT’s weapons are outfitted with EOTech M6X Tactical Laser Illuminators and sighting systems for dead-on accuracy. For mobile ballistic protection, Philadelphia SWAT has different levels of ballistic shields, from Level IIA to IV, to allow the unit some mobile cover as they move in with high-threat situations.

The Taser X26 is standard-issue for Philadelphia Police. In order to carry it, though, Philadelphia has its officers complete a week-long training course that focuses on how to handle the device as well as emotionally disturbed individuals. Once the course is completed, only then can an officer carry the X26 on the street.

The Mossberg 500A beanbag shotgun, pepperball-capable, gives the unit the option of hitting a suspect with something non-lethal but still unforgettable. The Defense Technology 37mm launchers for CS and OC munitions allow the unit to fire less-than-lethal projectiles directly at an aggressive, non-compliant subject or crowd.

For dynamic entries, the SWAT unit can announce with a sound and light diversionary device (flashbang) from a pole and deployment device to ensure they “bang” the right spot. In low light, the unit is equipped with night-vision monocles, similar to the military, so they can surprise a suspect with speed and dynamic action, a distinct tactical advantage.

Philadelphia SWAT also trains with tactical K9 teams that are located at the police academy. The dogs are trained in patrol tactics and bomb and drug detection. In a city with such a diverse landscape, the K9s have to be able to work in either a city street, airport or stadium environment. It’s also nice to have a 90-pound K9 as backup to help provide coverage or find a suspect for the unit. These “officers” offer a great force multiplier for the unit and are essential to law enforcement work and provide a tactical advantage.

In the 21st Century, most departments use a robot for a variety of tactical situations. Specifically, Philadelphia SWAT has robots capable of video surveillance, explosives identification/handling and other uses.

Many of the operators are trained with tactical emergency medicine. This training allows the operators the ability to “triage” themselves and each other to prevent loss of life. The medical training teaches medical care, tactical extraction of a downed officer and how to move them out of a “hot zone” into a covered and safe position.

Philadelphia SWAT carry fully loaded medical kits and are able to care for their own and save lives. They have also perfected tactical extraction using their Lenco BearCat as cover, to get to and rescue a trapped officer. Philadelphia SWAT also can provide a HAZMAT response with full personal protective equipment (PPE) for any biological, radioactive, chemical or nuclear situation. With the 2001/2002 anthrax attacks and the heightened terroristic threat, Philadelphia SWAT has a critical role with handling any incident that occurs.

Philadelphia SWAT has a range of up-armored vehicles to choose from to handle any call, including one M113 A3 (APC) personnel carrier with a weight of over 27,000 pounds (combat load), 191.5 inches in length, a height of 86.5 inches, and a speed of over 40mph. This fully armored vehicle has been retrofitted to match Philadelphia SWAT’s needs. They also have one Lenco BearCat armored vehicle, weighing over 21,000 pounds with eight gun ports and ballistic capabilities for 7.62x51mm NATO ball ammo (upgradable to .50 BMG or 7.62x51mm AP). The hull is also a modified V-Hull for blasts and the roof has a “ballistic shield” to allow some overwatch of the unit.

They are also several SWAT response trucks that they work out of on a daily basis, each loaded with a selection of SWAT tools, as well as several covert vehicles for a quiet approach.