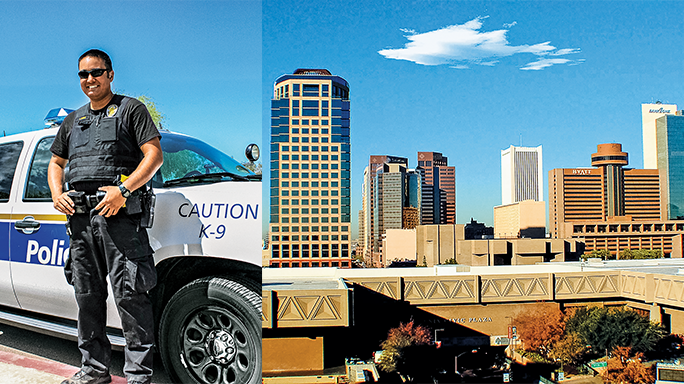 1 of 5
Sun Valley Defenders: Phoenix PD Relies On G17, G22
Phoenix, Arizona, has a population well over 1.5 million. To keep its citizens safe, the Phoenix Police Department has numerous support divisions, including K9 units and the Special Assignment Unit, all of which use 9×19, .40 and .45 AUTO GLOCKs. 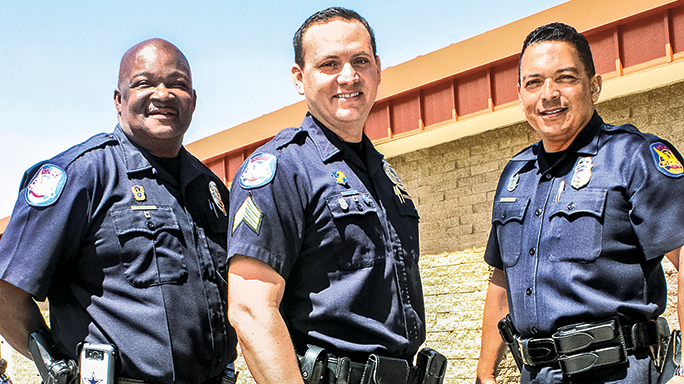 2 of 5
Sun Valley Defenders: Phoenix PD Relies On G17, G22
Thanks in part to a top-notch academy and amazing gear, Phoenix police officers serve and protect with the utmost professionalism. 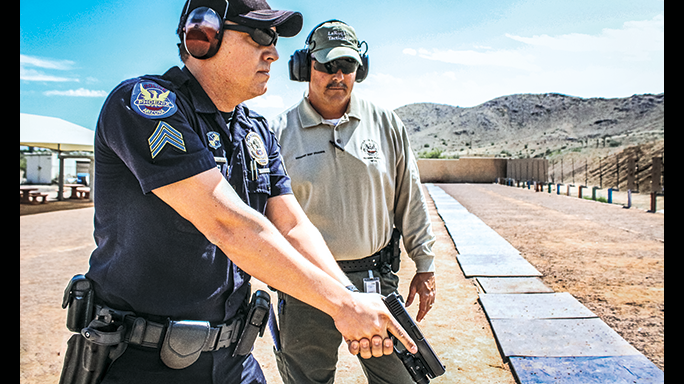 3 of 5
Sun Valley Defenders: Phoenix PD Relies On G17, G22
Phoenix police officers have to work in a variety of environments, facing many types of threats. The solution? Lots of training and GLOCK firepower! 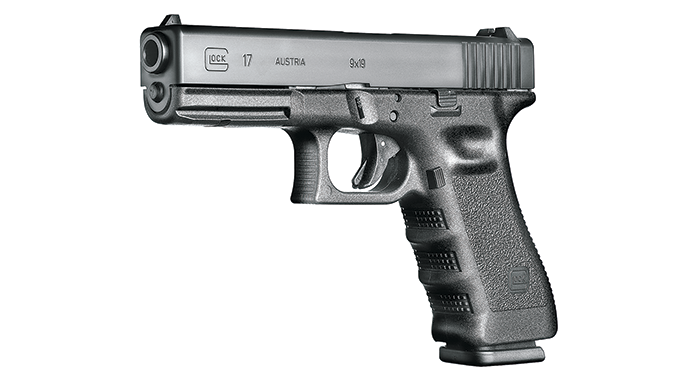 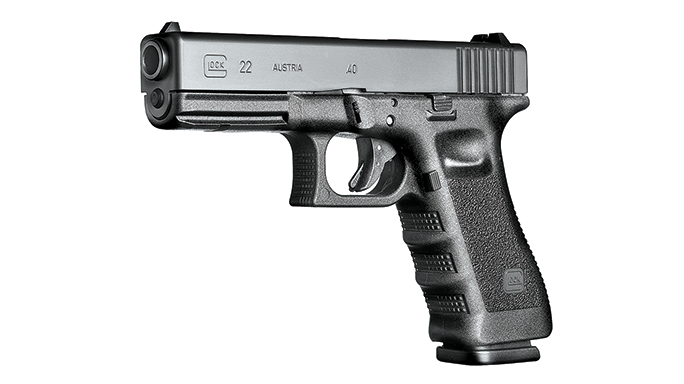 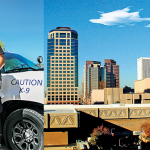 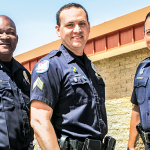 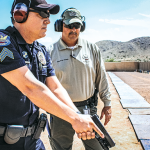 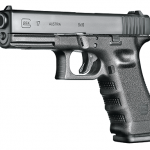 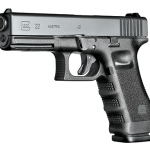 On the upper edge of the Sonoran Desert lies the thriving metropolis of Phoenix, Arizona. In the 134 years since its incorporation date, the city’s population has exploded to over 1.5 million people. Phoenix is the sixth-largest city in the U.S. and is projected to be the fourth largest by the year 2020. Phoenix is just one part of what is commonly called “The Valley of the Sun,” which includes a number of neighboring communities, such as Chandler, Scottsdale and Mesa. The total population of “The Valley” is approaching 5 million people, which makes for some significant law enforcement challenges.

Serving and protecting this vast and growing population is the Phoenix Police Department (PPD). Equipped with GLOCK handguns, the department’s more than 2,900 sworn police officers diligently protect the areas in and around Phoenix. Broken into seven precincts across the city, officers serve an ever-growing and diverse population drawn to the city for its weather, economic potential and lifestyle. As with any major metropolitan agency, it has support divisions, such as air and K9 units, as well as unique divisions such as the Business and Economic Stability (BEST) detail, which targets fraud and the trafficking of counterfeit goods.

One of the aspects that makes the PPD so successful is its focus on service. Sergeant Vince Lewis explained, “All specialty assignments inside the agency exist to support the Patrol Division, which is the backbone of the department.”

One of the major supporting divisions is the K9 unit. Officer James Smoke is quick to talk about his three-and-a-half-year-old Malinois and the 17 other K9 teams working in the department. They actively work to support the Patrol Division in their duties and ultimately serve the citizens of Phoenix.

While different divisions are tasked with specific duties, the PPD’s commitment to quality equipment is clear. All divisions are issued GLOCK pistols as their duty weapons. I had the chance to visit with two officers who had previously served at other agencies before coming to the PPD. When questioned about it, they expressed a relief that Phoenix issued GLOCK pistols. They were both personal GLOCK owners and advocates, but their prior agencies had another handgun as their duty weapon. Their solid belief in GLOCK reliability makes their nightly patrols a little less stressful.

Along with a range of supplemental gear, such as OC spray and stun guns, each officer is issued a GLOCK handgun. The PPD officially adopted GLOCKs as its primary duty weapons in 1993 and has never looked back. Phoenix is an officer-centric agency and allows officers to carry a variety of GLOCK pistols. The three most commonly seen on the streets are the GLOCK 22 in .40, the GLOCK 17 in 9×19 and the GLOCK 21 in .45 AUTO.

Sergeant Bret Draughn of the PPD’s Firearms Training Division explained that the goal was to provide weapons that officers could shoot accurately and effectively. GLOCK has proven to be an excellent weapon in that capacity. GLOCK pistols meet all of the agency’s requirements and provide a reliable and accurate weapon for officers.

While visiting with other officers regarding their sidearms, the talk quickly turned to the GLOCK’s ease of use, reliability and accuracy. In simple terms, the officers like and respect their GLOCK pistols. When the worst-case scenario occurs, officers have confidence that their GLOCKs will perform. For over 22 years, GLOCKs have held their position as the weapon of choice for the officers of the Phoenix Police Department.

One of the quiet stars of the PPD is its Special Assignment Unit (SAU). Composed of elite law enforcement personnel, the SAU has earned a reputation as one of the premier SWAT organizations in the country. The SAU is composed of five squads and is tasked with executing high-risk warrants, high-risk building entries, barricade and active-shooter situations as well as counter-terrorism activities. With a training tempo approaching those found at federal levels, the SAU is ready to protect and serve in the direst of circumstances.

On an individual level, officers are trained and equipped for anything that could occur on their daily patrols. During 18 weeks of thorough training at the Phoenix Police Academy, officers are trained on a variety of topics, such as patrol stops, GLOCK handgun qualifications, defensive tactics, traffic laws, less-lethal weapons, radio use, weapon retention and emergency vehicle operation.

The Phoenix Police Academy also serves as the Arizona Law Enforcement Academy (ALEA) and trains officers from around the state. Led by Commander Louis Tovar of the PPD, it is staffed with officers from other agencies around the state. ALEA’s mission statement on staffing is insightful, stating, “Staffing at ALEA is intentionally divided up between participating Arizona law enforcement agencies. Arizona is fortunate to have the best law enforcement professionals scattered throughout the state. By hand-picking the best of the best from Arizona, ALEA ensures that recruits are receiving the best and most current training possible.”

This training approach allows for continuity between statewide departments, leading the majority of law enforcement agencies in Arizona to issue GLOCK handguns as their duty weapons. This makes officer training and qualifications much more seamless, allowing all recruits to develop an ingrained respect and connection with other agencies inside the state.

As the city of Phoenix continues to grow, hiring the department’s next generation of peacekeepers now takes on a new priority. The agency plans on hiring 235 new officers by the end of the 2016 fiscal year. As Phoenix continues to rise from the desert surrounding it, the PPD will grow with it, and continue to protect and serve its residents. 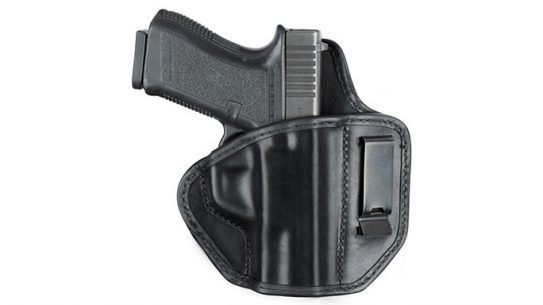