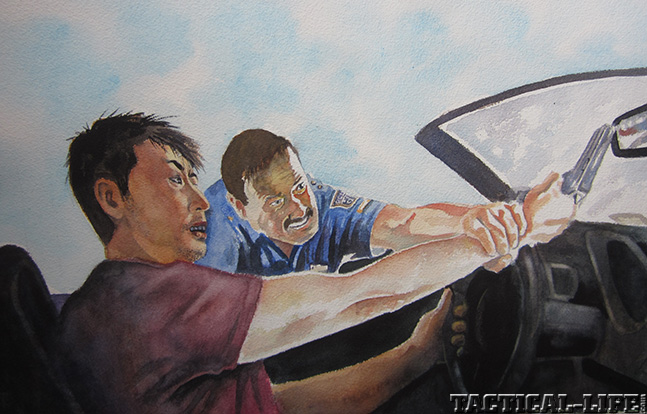 It Happened to Me: Blocking the Draw
Comment(s)

It was about 1990, and I was a rookie patrolman. Our department hosted a local Explorer Scout Program, in which adolescents received training in a “mini” police academy, and afterward rode with patrol officers to learn about the job. One of the lieutenant’s sons was an avid participant, riding nearly every day. The kid was smart, had an uncanny photographic memory and wasn’t annoying, as most of the scouts could get. He wound up riding with me pretty often. (He is now a police officer himself in a nearby community.)

One night we were patrolling when we scanned a radio call of a male subject pointing a gun at some subjects at a local apartment complex. The suspect’s car was described as a new, white Camaro convertible, with a tag number. I rushed to the area and looked for the vehicle, but the evening traffic rush slowed my response considerably, and the subject got away. The call wasn’t mine, and actually was located on a bordering street of another neighboring metro area police department, though the direction of travel put the suspect vehicle on my side of the border.

The next afternoon, the same scout was again riding with me when we both spotted a vehicle and subject matching the description. A tag number had been given the previous evening, but I could only remember the first three letters. As soon as the Explorer Scout and I exchanged a few words about the vehicle matching the description, he blurted out that even the tag was correct. I’d learned to trust his memory, and besides, the tag was expired anyway. I activated my overhead lights and initiated a traffic stop.

Long before, I’d contemplated having a gun drawn on me by a driver while on a traffic stop. It occurred to me that if the gun were within arm’s reach, empty hands would be far faster than going for my gun. As it turned out, I’m glad I had run through such scenarios in my head.

“It truly was as if time slowed down, and I was seeing the pistol swinging around toward me in slow motion.”

Given the call I’d heard go out the previous evening, I was obviously keyed up and approached cautiously. The suspect’s convertible top was down, which gave me an excellent view of the vehicle’s interior and the suspect. I told him I’d stopped him because of his expired tag, and requested his license and insurance verification. Changing gears, I asked him if he’d been at the apartment complex in question the previous evening at the time given in the radio call. He admitted he had.

Explaining the nature of the call, as well as the perfect description that had been given of him and his car, I plainly asked him if he’d pointed a gun at someone. He denied it, so I followed up by asking him if he had a gun in the car. He looked at me for a moment, hesitating, and then, without a word, he quickly pivoted in his seat and flipped the center console open. Grabbing a small black semi-auto pistol from the console, he began turning back toward me with it in his right hand. I’d read about tachypsychia, and here I would experience it for myself. It truly was as if time slowed down, and I was seeing the pistol swinging around toward me in slow motion. I reached out with my left hand to meet his; grasping both the gun and his hand in my grip, I slammed his hand into the steering wheel as hard as I could. It was my intent to draw and begin shooting at this point if he resisted. Fortunately, he offered no resistance, his hand going limp after I struck the wheel with it. I then snatched the pistol from his hand, drew my own, and stuffed the little semi-auto into my duty belt.

Adrenaline had by this point taken over, and I began bellowing at him to get out of the car, and ordered him to the ground in a prone position. My Explorer Scout had seen this play out and was already on the radio calling for backup. I held the suspect at gunpoint until other officers arrived, and he was taken into custody without further incident.

I would later find out he was a member of a local gang with an extensive felony record and, when asked, he claimed he was going for the gun to “show it” to me. Fortunately, I’d considered such a situation well in advance and already had a plan—I would never have to find out what his real intentions were. The suspect’s information and my report were forwarded to the bordering police department, which allowed them to clear the case. —MB, OK 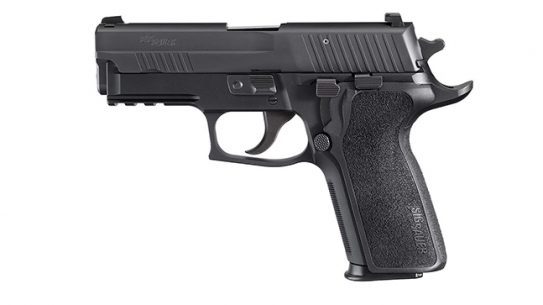