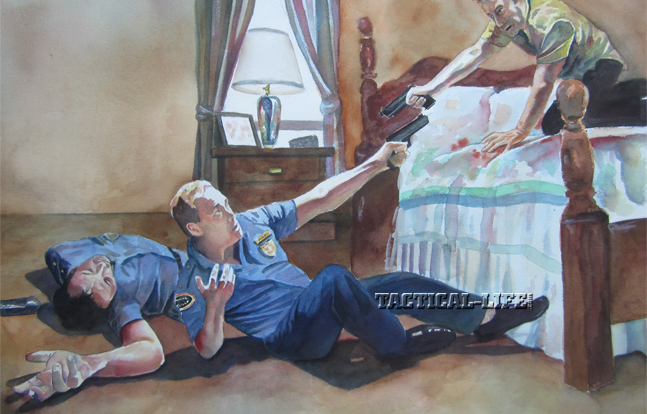 My unit of the City of Pearl, Mississippi, Police Department had been assigned to serve a search and arrest warrant against an individual accused of sexual battery and child molestation. When we arrived, there was no response, and the landlord let us in. However, unbeknownst to us, he was lying in wait to ambush us. My partner found him behind a wall partition refusing commands to surrender. My partner aimed his Taser at the suspect to try and subdue him with minimal force, but as soon as he took aim, the suspect jumped out from cover and began firing at us with a 9mm handgun.

The Taser fired but had no effect, and at the same time my partner was hit with the suspect’s first two shots at close range and collapsed. I was standing right behind him and could not engage the suspect with my partner in the way. When my partner went down, I had my .40-caliber Glock 23 in my right hand, but as I took aim, one shot from the suspect’s gun hit my weapon’s slide and then glanced off into my hand, severely injuring my hand and disabling my gun. The next round went through my leg, just above my ankle, causing me to fall.

As I went down, another officer was able to return fire, emptying his gun and wounding the suspect several times before he and others had to retreat from the room as the suspect continued to fire. Unarmed, I was able to crawl to a corner of the room while the suspect slammed the door shut, with me and my partner trapped inside the room with him. He noticed almost immediately that we were still in the room with him and that I was still moving. As the suspect aimed his gun at me, my only option was to engage him and try and reason my way out. I told him that it wasn’t too late to surrender, that I could help him. I didn’t want to say, “Don’t kill me”—that might give him the idea. 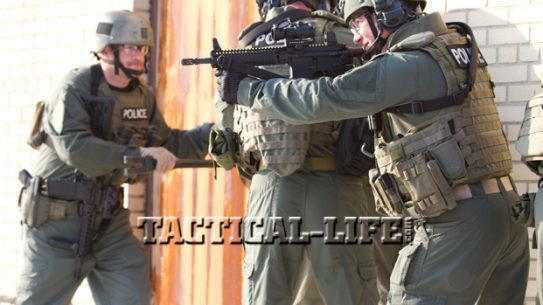