0
SHARES
1
VIEWS
Share on FacebookShare on Twitter
Open to military, law enforcement, and civilians as well—whether you purchased the rifle or it was issued to you—this class is a must. Many dealers that sell this weapon system often attend in order to provide the best service possible.

The Barrett M82A1 / M107 is still the primary “light 50” for pretty much every military force in America, as well as several of our allies. It is simple, reliable, and has acquitted itself with distinction in combat. Initially developed in 1982, it saw its first real action with our military forces in the early 1990’s during Operation Desert Storm. Primarily an anti-materiel weapon, but is also used for ordnance disposal, it was officially adopted by the U.S. Army as the Long Range Sniper Rifle, Caliber .50, M107 in 2001.

Firing the 50 BMG (Browning Machine Gun) round, it sends a 647-grain projectile downrange at close to 2,800 fps, resulting in significant damage to about anything it hits. With the continued terrorism threat to America, it is also used by those police agencies requiring such a weapon. As a semi-automatic rifle, it offers capabilities bolt rifles simply cannot. It truly allows the operator to fire repeat shots as needed about as fast as the trigger can be pulled. 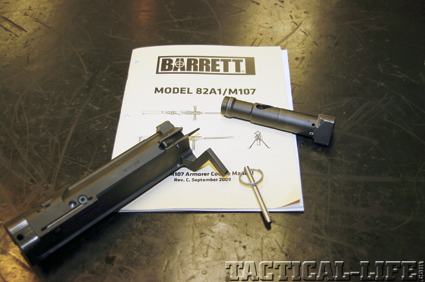 While an armorer’s manual is a must for any serious gunsmith, Barrett’s Armorers School takes the hands-on experience of battlefield maintenance even further.

Armorers Training
Like any semi-automatic firearm it requires maintenance, and for this platform, a bit of training is in order. Designed from the ground up to be operated and maintained in the field, it is not a complicated weapon—but it pays to understand its operation in order to keep it running at its best. Generally any firearm an agency or unit fields has to be serviced regularly by someone trained to do so. You can certainly send the weapon to the manufacturer or a gunsmith, but many send an officer to be trained appropriately. Given this weapon’s proven time in action, field-tested tricks of the trade abound. It never hurts to have these tricks in your bag as an operator or armorer.