1
SHARES
18
VIEWS
Share on FacebookShare on Twitter
Raidon Tactics students coordinate fire and movement from behind a “downed” vehicle before they move off the “X.”

Heavily armed men spill from the incapacitated SUV, rapidly turning the chaos of a convoy ambush into a highly rehearsed and choreographed series of maneuvers that ultimately enable their escape from the “X.” But what began as a typical convoy operation quickly turned into mayhem, replete with smoke, erupting gunfire, showers of hot brass and calls for assistance from several “injured” teammates. Having achieved fire dominance with overwhelming, effective return fire, the casualties continue to perform self-aid techniques from behind cover, then reengage the enemy to the best of their abilities. Once everyone is successfully off the “X,” the team moves to a position that is advantageous for recovery.

Although this wasn’t a real-world scenario, it was most certainly reality-based, having been designed by retired MSG Frank McRae, a former Army Special Forces soldier and master CQB trainer.

Raidon’s Ronin
McRae, following his retirement from active military service, founded Raidon Tactics in 2009. All Raidon Tactics instructors have extensive military special operations backgrounds, and most were also instructors at one or more of the U.S. military’s elite special operations schoolhouses. McRae was, in fact, the non-commissioned officer in charge at one such facility.

The site housing the Raidon Tactics/37PSR complex had operated for many years under different ownership and a different name. After acquiring it in 2009, McRae and his cadre wasted no time in improving much of the existing facility. Training began in earnest in early 2010. 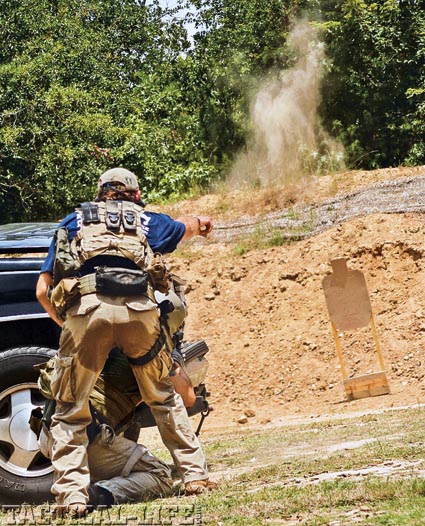