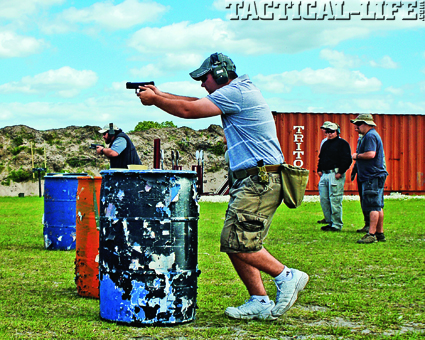 For any drills that are typically shot standing still, Hackathorn incorporates shooting on the move as well, with movement towards the target, away from the target and lateral to the target. Each time Hackathorn tracked and observed your improvements or identified shortcomings needed to work on.

Ken Hackathorn is one of the most widely respected instructors in the firearms training world. Founding member of both IPSC and IDPA, an instructor working for Col. Jeff Cooper before there ever was a Gunsite, FBI Certified Firearms Instructor, Deputy Sheriff—Ken’s resume speaks for itself. He has consulted for a wide variety of firearms manufacturers and has been published in a variety of magazines. Ken has studied law enforcement after-action reports, crime reports, and dash- and security-camera footage to determine what happens when guns are involved in the real world. He then uses that information to prioritize training as it may be practically employed in a pragmatic defensive shooting situation. I recently had a chance to attend his Advanced Pistol Course. Throughout the course of the two days and one night shooting, we would grow accustomed to hearing the words “in the real world” from Ken as he described various elements.

Advanced Class
Sixteen shooters from varied backgrounds met with Ken (and his assistant instructor for this class, Stony Smith of Paragon 6 Consulting) at the Universal Shooting Academy outside of Frostproof, Florida for an Advanced Pistol course in early April 2012, hosted and coordinated by Grey Group Training. Beginning at 0800 on Training Day 1 (TD1) with a safety briefing, Ken aptly described his course as “the Ken Hackathorn Potluck” wherein you “take some of Ken Hackathorn’s dishes and put them on your table,” taking a little bit of what you like and you leaving behind what you don’t. Ken then explained his background, experience, and how he arrived at his teaching methodologies and philosophies, ultimately arriving at the five realities of a gunfight:

From there we moved out to the range, and began what Ken aptly described as a “building block approach” to instruction. Since this was billed as an advanced class, some of the truly elementary building blocks were assumed, so we began by firing single rounds from the ready position of your choosing at 7 yards. From there Ken explained the high-ready and low-ready, and we engaged the targets from these positions using the tips that Ken had shared. This led to discussion of the grip, stance, and trigger control. We then partnered up with another shooter to try our hand at a dryfire drill. The drill consisted of your partner placing an empty cartridge case on your front sight after you had acquired your grip and stance, and were pointed in at the target. You then press the trigger to the rear, attempting to keep the cartridge case balanced in place. Every shooter was required to complete five clean attempts in a row. As Ken stated “trigger press is the heart and soul of firing the pistol.” Ken then had us fire a drill to test the limits of our sights. We held the front sight to the far right of the notch of the rear, to the far left, above, and below, firing one round from each position. All hits were in the C-zone of a USPSA target. While not ideal, clearly nobody wants to get shot in the area that the C-zone represents. This served to reinforce the notion that trigger press is everything. 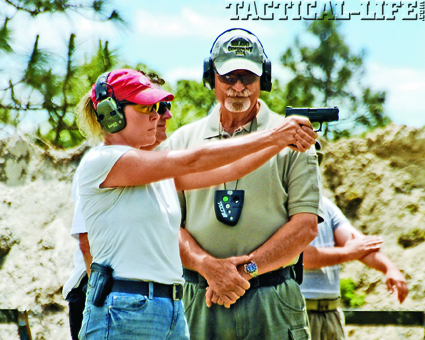 Right, left and 180-degree turns were taught. Since we’ve all been turning our entire lives, Hackathorn did not believe in teaching fancy footwork relative to something we knew how to do already. 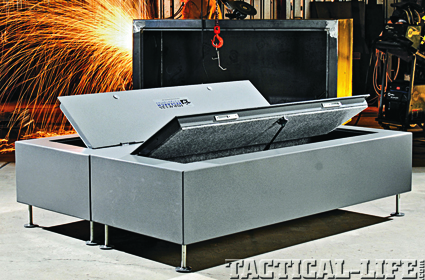 For any drills that are typically shot standing still, Hackathorn incorporates shooting on the…